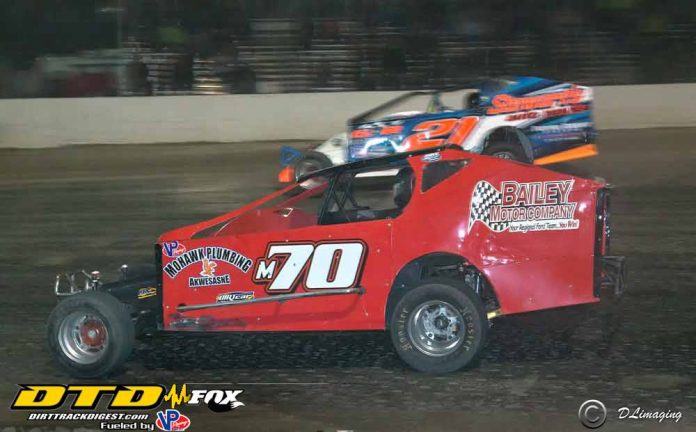 The Golden years normally are defined as ”the years of retirement, normally after age 65,” according to the Random House Kernerman Webster’s College Dictionary. Bill Cook, however, has thrown this rule of defined golden years out the window as this 74-year-old wily veteran racer still competes, three times a week.

Friday nights you will find Bill at his local track of Mohawk International Raceway and once that race is done the next day, he is off to Airborne Park Speedway, followed by another trip across the Saint Lawrence River to Cornwall Motor Speedway, on Sunday — a schedule most twenty-year-olds would have a hard time keeping up with. Come Monday, he is back to work at his auto repair shop, “Cooks Auto Repair,” celebrating 50 years of business and is located on highway 37, just on the outskirts of Akwesasne, NY. Come Friday after work, it’s once again off to the track.

Billy began his racing routine back in 1970 when he started racing in the 8-cylinder Street stock, but quickly progressed to the Modified class in 1971 and won his first of many Modified features at Cornwall Speedway in 1972. He continued racing Modifieds until 2011 when he transitioned into the Sportsman Class. Throughout those years, from time to time, Billy would race in the Big Block Modified class or in the Late Models.


“It has been a long run of racing and, over those years, some race experiences still stick in my mind,” Billy explains. ”Like the time I was asked to drive the number 53 Sprint Car at Frogtown Speedway. Something I had never done before but I thought I would give it a go. Well, I won and it was an amazing experience winning the one and only time racing in a Sprint Car.”

“The other time I remember we had to race a Syracuse qualifier race at Cornwall Speedway on a Saturday afternoon, and then a 100-lap DirtCar race that night at Airborne Park Speedway. At the end of the day, we came home with two wins, probably my most memorable day of my racing career.”

These days since 2011, Billy has been racing in the Sportsman Modified class alongside his grandson Thomas Cook, which is one of the main reasons Billy, went down in class to the Sportsman ranks.

“Racing alongside Thomas is a very special time in my life and I am enjoying every moment racing alongside him, as long as he lets me win,” Bill laughingly explains.

Even though Billy Cook is older than most active drivers and has forgotten some of the tracks he has raced at over the years, he is still very competitive with some great results recently.

In just the last few weeks, Billy won a heat race at the Cornwall Speedway, finishing second in his heat race the following week at Mohawk and picking up a third place finish last week in the “Crossroads Tobacco Sportsman” feature at Mohawk International Raceway.

Yes, Billy is in his “Golden Years” but he will define these years his own way. He will be enjoying every moment, racing alongside his grandson Thomas, because, after all, spending time with family and doing something together provides never-ending memories.