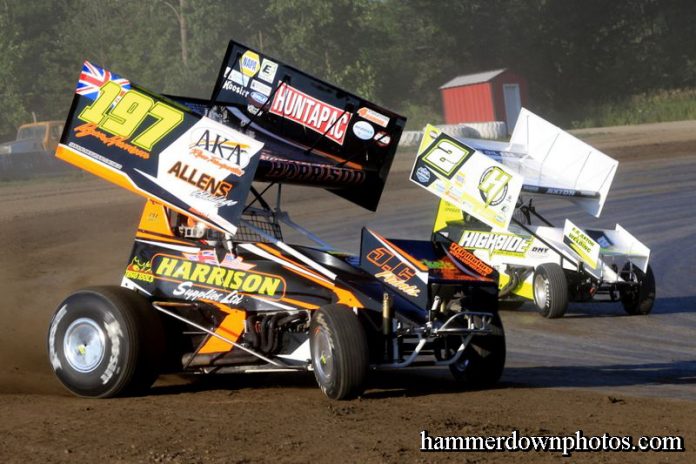 Ryan Harrison has had a well accomplished racing career across the pond in England. Harrison has won numerous championships in his home country as well as titles all over Europe. As a result, the Northamptonshire resident was ready for a new challenge. One that would force him make his way to North America. That challenge, winged Sprint Car racing.

This past week Harrison got his baptism under fire as they say in competition with the Lucas Oil Empire Super Sprint as part of the sixth annual Donath MotorWorx Central New York Speedweek. Harrison qualified for one main-event during the five nights. He made the show at Land of Legends Raceway and missed by only a spot at Can-Am Speedway. He failed to make the show at Brewerton, Fulton and Utica-Rome Speedways.

“We had a decent start from what we expected but it went downhill the last few nights,” stated Harrison on Sunday night at Utica-Rome. “We changed a few things. Talked to a few people. We found out that we need to stick to listening to one person, not everybody. Everyone is a little bit different. We are doing a bit of this, a bit of that and getting ourselves in a muddle. We took a big backward step.”

Harrison has run in the states in the past. He got behind the wheel of a mod-lite on a couple of different occasions. The goal was always to try Sprint Car racing. Last week proved to be a huge learning experience for the 27-year-old.


“We bought a car, know what doing back home and we run with the best back home, but this is a completely different ball game,” commented Harrison. “Even just down to moving a wheel a half inch. If I moved it on my car I wouldn’t feel a difference. We are getting there. Even cutting tires and stuff. We got to learn everything really.”

Part of the issue Harrison struggled with all week was how loose the car was. Central New York tracks are known for being slick and he got to experience that first hand throughout the five nights of racing.

“It is always loose,” he stated of his car. “Everyone says it’s always slick around here but the thing shouldn’t be that loose. We are just struggling with drive all the time.”

Besides learning the setups, Harrison was faced with a completely different style of car with speeds that are far faster than what he is used to. He also isn’t allowed to run into other cars on the track. In England the cars run rub rails all the way around and racing is a bit more of a full contact sport.

“The biggest thing is the speed,” he said about the difference. “That is the hardest thing for me. These are double the speed, quite a bit difference at the end of the straight. You also got to be very aware what’s around you in these cars. That’s been different, knowing the side of your right rear and your car widths. Back home you lean on people. You bang into them. If they are slow you just punt them out of the way. Obviously you can’t be hitting people in this, but you also have to remember you can’t even just rub them because it will end in tears.”

Harrison got the whole gambit of tracks during the week. He got the big half-mile tracks like Can-Am, Land of Legends and Utica-Rome while also competing on the smaller Brewerton and Fulton Speedways. He admitted he liked the bigger tracks better. There is more room for him to feel things out and feel what the car wants.

“I like the big tracks where there is a bit more room and bit more breathing space,” commented Harrison. “The smaller ones everyone is on top of each other. It’s a bit tough. We don’t want to wreck anybody while we are trying to learn. You come in here and do a stupid move and people aren’t going to respect you. We want to do it properly. That’s where we want to be.”

Although it’s been tough, Harrison had fun throughout the week. He learned and will keep coming back until he figures things out.

“It is sort of what we expected,” mentioned Harrison. “We are enjoying it. We are all enjoying it together. I think that is the main thing. The last few nights have been tough and it’s been really frustrating. It is going to take time. We want to keep coming back as much as we can so we can get on top of it. We will make it happen, definitely we will.”

Harrison is next scheduled to come to the states at the end of August and early September to compete in four nights of racing with the Empire Super Sprints.