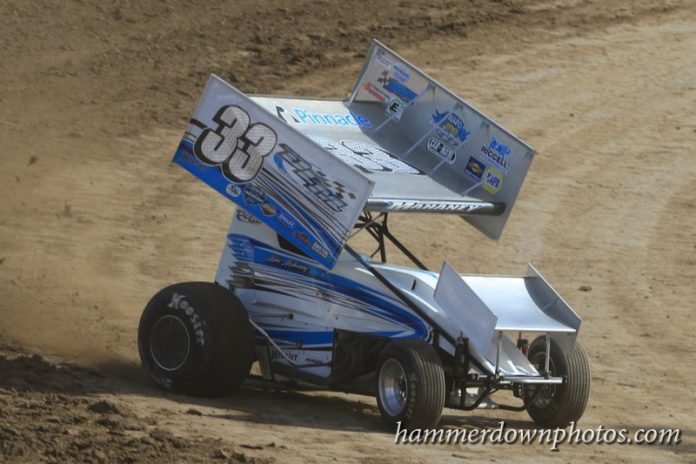 It may be the end of CNY Speedweek for the Empire Super Sprints, but the big-block modifieds were also in action twice alongside the winged warriors. Mike Mahaney is a regular with the modifieds and is the subject of the fourth edition of the ESS CNY Speedweek Featured Driver Series.


Mahaney, now 29, stepped foot into a racecar at the age of 14. The Briggs & Stratton-powered slingshot was the first car Mike drove after years of watching his father race a dirt modified around Central New York. He won several track championships before his time in the mini-modifieds was done.

Mike soon made his way into wingless and winged micro-sprints, eventually winning a points championship at Paradise Speedway. He then decided to go completely wingless, getting a Sportsman Modified for his 16th birthday and breaking the crankshaft after just three races, Mike lightheartedly said.

After a few wins in the Sportsman division at the Cayuga County Fair Speedway, now Weedsport Speedway, car owner Charlie Davis offered Mike a ride in his small-block modified. He won a track championship at both Thunder Mountain Speedway and I-88 Speedway (now Afton Motorsports Park) before buying a big-block in the years that followed, racing at Cayuga County and Black Rock, now Outlaw Speedway, on a regular basis.


Cayuga County soon dropped their weekly competition schedule after the 2010 season, and Mike was forced to look elsewhere for competition. In the years that followed, Mike raced weekly at the Fonda, Brewerton, Fulton, Utica-Rome and Canandaigua (now Land of Legends) Speedways in his Modified.

The arrival of the late 2000s saw Mike’s debut in a sprint car, owned by Fred Gormley. He only made two starts, once at Can-Am and again at Cayuga County. The partnership soon parted ways before much progress was made, and Mike saw zero sprint car seat time in the next few seasons.

Cue car owner Doug Emery. Mike caught the former ESS winner’s attention with his skill in the Modified ranks and was recruited to drive Emery’s car near the end of the 2015 season. It only took a half year of racing before Mike got his first win in Emery’s car at Brewerton for round one of the 2016 ESS CNY Speedweek.

“He’s a great coach,” Mike said in an interview. “He’s taught me a lot about sprint car racing. We’ve had a lot of good success and one win, and I’ve really enjoyed the whole deal.”

Speaking of Speedweek, Mike had quite a run at last year’s title, only to have misfortune strike him at the worst time. He came into Utica-Rome as the Speedweek point leader, when his car suffered an engine failure early in the feature, ending his hopes for the title. He did walk away on the podium, however, taking home the bronze medal in overall points.

In 2018, Mike’s racing schedule is as hectic as it has ever been, and may even marvel some of the most seasoned drivers. Mike currently races for six different race teams: a SpeedSTR at Action Track USA in Kutztown, PA, the Charlie Davis-owned Olum’s big-block modified, his family-owned No. 33 big-block, another big-block at Grandview Speedway in Bechtelsville, PA, Doug Emery’s sprint car and a car Mike keeps in southern New Jersey. This Eastern Rigging-sponsored big-block is driven by Mike in various special events across The Garden State.

“Some of the cars I maintain, some I don’t,” Mike said. “Some I just show up and drive, sometimes I have setup input, sometimes I don’t. But I just really love what I do.”

As for his career goals, Mike plans to still be racing well into the future. Outside of the track, he specializes in the race shop with shock repair and dynamometer service, which keeps his technical abilities sharp. Team ownership has even crossed his mind.

“There’s a lot of good drivers out there who haven’t had a chance to try something like this,” Mike said. “I think it would be fulfilling to see someone grow and get better that has potential.”