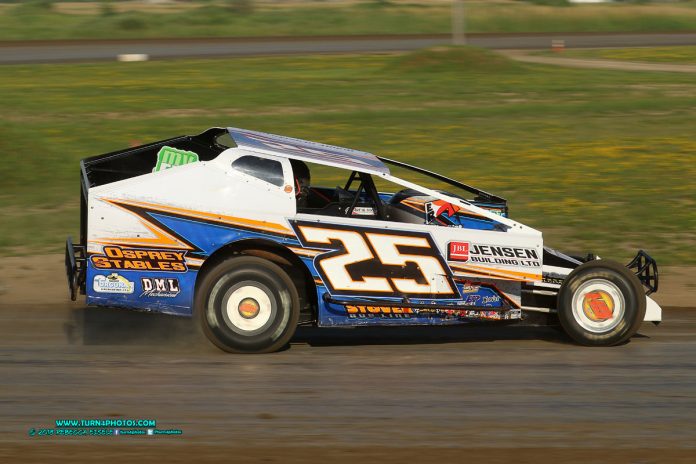 The 358 Modified driver has made his mark at Can-Am, Fulton and Utica-Rome already this season and he hopes it will only get better.

Last week he captured the biggest win of his career at Can Am in the Pabst Shootout.

Herrington had a highlight reel moment recently as he chased Tim Fuller and Billy Dunn in the major, high paying 358 race and was in contention throughout.


However, Dunn broke with just a few laps to go and it set the stage for Herrington to achieve a career moment.

He said, “I have won 10 Modified races in my career, mostly at Brockville, and one at Edelweiss. However, the win at Can Am was something. I didn’t get it at the moment, but after it started to sink in. I am usually just happy to see guys like Fuller (Tim) at the end.”

Overall on the night he explained, “We ran decent in the heat. Fuller was good on the straight, but not so great in the middle. I rolled the bottom and was able to get by him coming off the fourth turn on the final lap. He’s a guy who races four nights at week for the past 20 plus years. We have one car and one engine.”

Reflecting on the 2018 season he said, “I wanted a change of scenery so we came to Fulton to see if we could get better. I am almost a little surprised so far at how good we’ve been doing. We’re hovering around the top five, but we gotta get better.”

Of Fulton he noted, “It’s big and wide and there’s very little contact here. You have to be fast enough to run here.

“Seriously, though we didn’t plan on running full time at Fulton,” said Bobby, “The first week we did well and came back. I really thought we could run Fulton and Utica-Rome this year, but with Utica getting rained out so much early on we haven’t been able to run as much.”

He’s been competitive at Fulton and Utica-Rome.

However, he’s in a learning curve and last week prior to the ESS show he explained, “A couple of weeks ago we finished where we started. Fulton (surface) has been different every week. I thought it would be black and slick like it used to be in the Victoria (Outlaw), but it’s only been like that once this year.”

As of July 7 the Osprey Stables, ’16 Teo, powered by a Mike Block prepared powerplant, was sitting in seventh place in the Fulton point standings and was tied for eighth at UR.

There’s no doubt he will move up the ladder as the season progresses and he’s been a solid addition to weekly racing in Central New York.