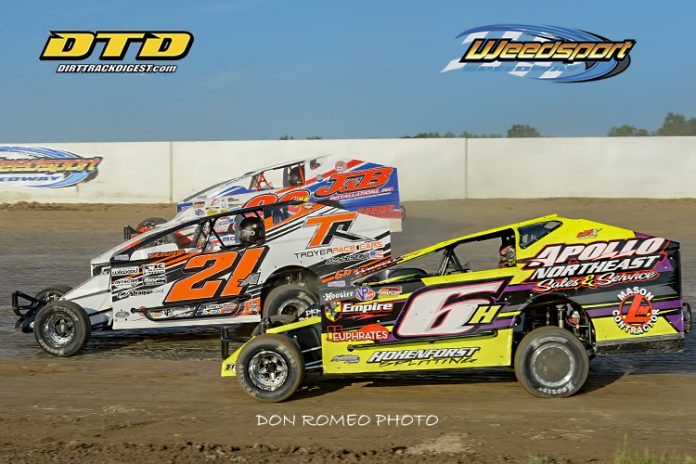 WEEDSPORT, NY – The all-new Hall of Fame Weekend at Weedsport Speedway on July 28-29 is quickly making headlines as the blockbuster event of the summer in Central New York motorsports circles.

Two full nights of racing will include the Super DIRTcar Series Big Block Modified Hall of Fame 100 presented by Beam Mack Sales & Service and Page Trucking on Saturday, July 28 with the return of the Craftsman World of Outlaws Sprint Car Series on Sunday, July 29 presented by the Coca-Cola Bottling Company of Northern New England.

The Hall of Fame 100 for the SDS Big Blocks will be a part of the recently announced Super DIRT Week qualifying trail, highlighted with six overall events.

Weedsport Speedway will play a key role in that qualifier series with the first, third, and sixth events on the card including the May 28 Heroes Remembered 100, won by Stewart Friesen, and the September 3 Labor Day 100.

The party continues the evening of Saturday, July 28 as the Portside Party will provide LIVE entertainment following the Hall of Fame 100 featuring Syracuse rock band, REV.  Learn more about REV at www.facebook.com/rockwithrev.

Be sure to visit www.weedsportspeedway.com to reserve your tickets and camping for this special weekend, featuring multiple days of partying and action.

The remaining 2018 schedule at Weedsport Speedway is a must-see lineup including the ESS Sprint Car Legends Reunion on August 12, the Super DIRTcar Series Big Block Modified Labor Day 100 on September 3 and the Super DIRT Week Kick-Off Party on October 3 featuring the DIRTcar 358-Modifieds.