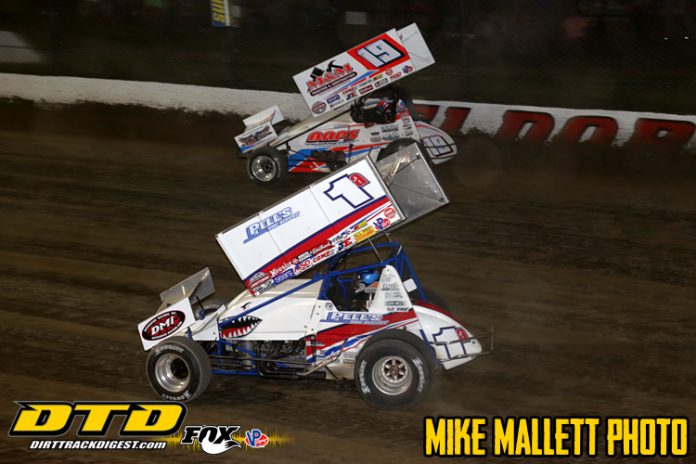 ROSSBURG, OH – When the World of Outlaws and Eldora PR folks write their stories about Night No. 1 at Eldora to kick off the 35th Anniversary Kings Royal Weekend it will mostly likely say “Shane Stewart wins the Joker’s Wild Night (The catchy name for the Thursday night program) to kick off Kings Royal Weekend”..or something to that fact.

And don’t get me wrong, those headlines are just and deserving. But, Jacob Allen (and allow me to steal a baseball quote) darn near produced the shot heard round the world. The son of Bobby Allen ran the lane made famous by the legendary No. 1A.

Just as that lap ten was scored and the pass for the lead happened the only caution came out when Stewart and Gravel came together right behind Allen with Gravel spinning into the turn one wall.


“I really didn’t want that caution to come out, I was really in my groove down at the bottom” said Allen on the caution, “I restarted on the bottom and was going to stay there and see what was going to happen.”

When the green lights shined, Allen did start first but Stewart had more momentum and took the lead going down the backstretch. Allen wasn’t deterred and stayed to plan edging back ahead on lap 14. Stewart is savvy and he too went to the bottom.

With Stewart pulling away some, Allen then went on the offense and started to move around the track. “I knew the race was going to change after that restart but I was still confident that I could stay in the front,” Allen went on, “But I had to change my lane, he (Stewart) was starting to pull away and I also had some slower cars. I don’t know if it was the right thing to do but I felt I had to do something as I think my groove was starting to go away.”

The changing of lanes did seem to make Allen’s effort lose some steam and soon Schatz, Tim Shaffer and others found their way past Allen. When the checkers did wave on lap 30 Jacob’s final tally showed him in seventh just a whisker behind Sheldon Haudenschild.

There was Stewart in the hallowed victory lane that his Eldora collecting his first WoO win of the year but you can still tell there was a buzz in the air and it was the result of Allen’s effort.

“It was fun running with those guys and here at Eldora,” he said with a smile.  “I still can’t thank everyone enough for helping me out. We are getting better as a team and it’s good to be competitive.”

Allen is indeed turning some heads as of late among the Outlaw band. He has been stout in time trials and at many events he has found himself in the dash. When you’re in the dash you know you’re going to start either in the top six or eight.

“Starting positions is a big factor in these races, when you can start up front that is huge,” he continued, “I just have a good setup with my car now. Whether it’s a big track or small track and different track surfaces we are fast.”

Then I had to ask the question that I think everyone would like to see… “You think that win will come this year?” It was without hesitation… “Oh yea, we will get that win!”

A total of 46 sprints filled the pit log causing for a C,B and A-Main format that was done in just under two hours…

Caleb Helms was the last car to show up and unfortunately suffered engine woes that could see him be the first car to go home early….

Logan Schuchart had to change engines after the heat…

Randy Hannagan is driving the Paul May #71M….

New for this year, the winners of the two preliminary nights can choose when to time trail on Saturday.