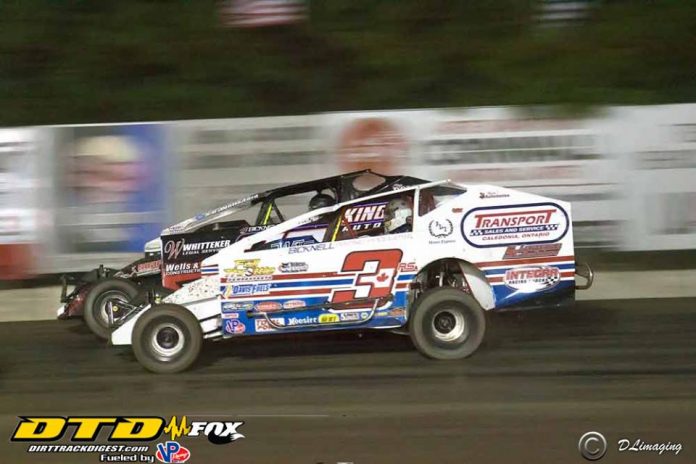 Cornwall, ON – Martin Bélanger – The biggest event of the season was presented tonight as the Race for the Cure 150 was run with 150 laps counting for the DIRTcar 358-Modified series, 50 laps for the Sportsman, 25 laps for Pro-Stock and Eastern Ontario Vintage Club on St.Lawrence Radiology and TAS Racing night.

Gary Lindberg and Jordan McCreadie led the field of 32 strong to green in the 150-lap Race for the Cure Feature as McCreadie took the early lead over Lindberg and Carey Terrance. A tangle involving Matt Sheppard and Dale Planck in turn 1 occurred on lap 4 and yellow was out, drivers were able to return to action. Action resumed on lap 11 with McCreadie leading the way as Terrance looped in turn 2 and caution was out lap 13. McCreadie remained in front as a few new faces joined the top 5 with David Hebert, Steve Bernard and Tim Fuller by lap 20. Bernard started to make progress in front as he took second spot by lap 35. Leaders were reaching lap traffic when an accident occurred between Steve Morris and Stephane Lafrance. On the restart on lap 45, McCreadie remained first with Bernard following closely as battle went on for third. The transmission let off on McCreadie’s ride on lap 55 and had to let go the lead to Bernard.

The #54 of Bernard to the lead with Lindberg in second with Brian McDonald and Mat Williamson making their way front after starting in the mid field.  At halfway point, Bernard was leading over Lindberg, McDonald, Fuller and Williamson. A lot of changes on a lap 79 restart as Lindberg pulled a great move on Bernard for the lead as Williamson move to third. Williamson had a great car and took second on lap 84 over Bernard. With 50 laps to go Lindberg kept his distance from but after starting back in 26th, Sheppard made his way in the top 5 and was on a mission passing the leader and moving up to second by lap 120. Kevin Hamel brought the field together on lap 124. Williamson leading the way, but Sheppard was following closely as Lindburg stopped in turn 4, losing his great 3rd place run with 22 laps to go. The leaders got into lap traffic with 10 laps to go as Sheppard was riding on the bumper of Williamson. Sheppard waited patiently behind the leader and chose the high lane in traffic with 2 laps to go, Sheppard used that lane and pulled besides Willamson with the white flag waving, both drivers races side by side as Sheppard got the edge at the winner’s circle over Williamson by only .042 seconds as Fuller completes the podium.


In the 50-lap Next Level Home Improvement Sportsman feature, Adam Rozon led the way over the field of 31 cars, Rozon pulled away in front and took a sizeable lead. Rozon caught a lap traffic car with 13 laps in and had to pull into the pits. On the restart, Shane Pecore quickly made his way to the front with Robert Delormier and Moise Page while Martin Pelletier made his way to the top. A lap 30 restart enabled Pelletier to move up to second after starting in ninth. Pecore got some good restart surviving a few cautions with Pelletier still in second with 10 laps to go. Pecore led the final laps to capture his second feature of the season.

The 20-lap Alexandria Home Hardware Pro-Stock saw Jocelyn Roy taking lead from Eric Jean-Louis in the early portion of the feature. Roy had company in CD Beauchamp around halfway as the exchanged the lead, but Roy was back on top with 5 laps to go. Roy captured his third of the year.

The first feature of the evening saw Paul Billings taking the lead in the 20-lap Eastern Ontario Vintage Club. Billings had some company with Josh Powers and Corey Winters.  Billings lead the caution free feature to the checkered flag.

The speedway will only take a few days off as the action continues this Sunday evening with Autograph night and a complete race program!