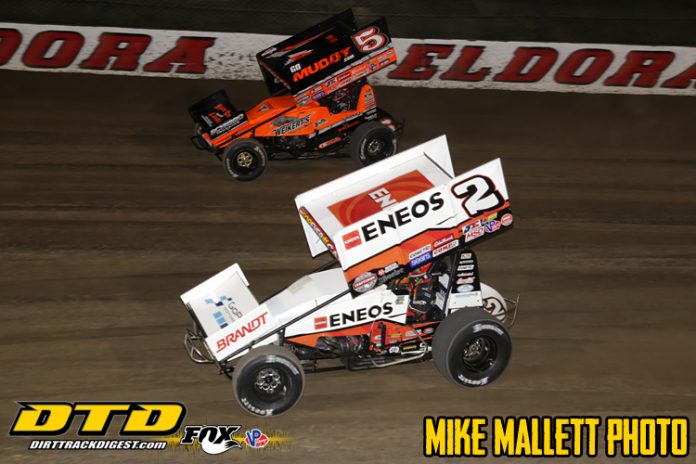 It’s hard to believe that Thursday night’s win in the Jokers Wild World of Outlaws 30-lap main-event at the Edlora Speedway was Shane Stewart’s first of the season. The Bixby, Okla., driver is usually one of the more consistent drivers on tour while picking up a handful of wins by this point in the season. That has not been the case in 2018 for Stewart and his Kyle Larson Racing team.

“We’ve had some good races and some good cars and somethings just haven’t play in my favor,” stated Stewart. “I feel like we have been in position to run well and I’ve screwed up. I’ve hit lapped cars, I’ve ran off the track. It’s just, for some reason, been one of those crazy years.”

He continued, “Then everything kind of happens with Jason (Johnson) and you’ve got to try and get that out of your head. It’s been a tough season, but I never doubted that we were going to win. It was just a matter of time. You just have to put together a whole night. I don’t think my car has been terrible every time we’ve hit the track. It’s just that everyone is so fast. There are no free spots anymore with the world of Outlaws.”

Stewart finally put together a whole night at Eldora. He ran well in the heat and his dash finish put him on the front row for the feature. Stewart battled hard with Gravel for the lead early in the race while Jacob Allen went by both of them on the bottom to take the lead on lap 10. Then caution was necessary as Stewart and Gravel made contact sending Gravel spinning on the front stretch. On the restart Stewart got the lead and never really looked back.


“I felt like the 1a (Allen) had the best car tonight,” commented Stewart. “He went by me and David (Gravel) so quickly before David and I got together and caused the yellow. I figured after that caution he was going to go right back by me. I felt like one and two was okay for me but three and four I struggled a bit. To get a win in these conditions, our program doesn’t necessarily work that well when it gets slick and we’ve struggled bad here the last couple years just because it’s just different. It’s a different track than it used to be.”

Stewart felt bad about the contact that sent Gravel spinning and into the wall. Stewart came off through the middle of turns three and four while Gravel was working the top of the raceway. As they reached the flagstand Stewart moved up and just clipped the left front of Gravel’s car. He made hard contact with the wall but was able to continue after a top wing change.

“I didn’t ever mean to get into David,” said Stewart about the incident. “I felt like I had him cleared. I know it was getting kind of slick coming off of four. I don’t know what happened. I just need to see the video. I definitely feel bad about that.”

As mentioned, Stewart took the lead on the restart after the only caution of race. He led the final 19 laps for the win. He worked the high lanes of turns one and two on the restart to rocket around Allen for the lead. After a few laps he made his way to the inner lane around the speedway and that proved to be the difference maker. Although he didn’t feel the best in that groove, it paid off.

“I didn’t actually feel like I was that good down there,” cited Stewart. “It’s really hard to judge your speed because you have to go so slow now and that is really hard because you are used to who has the biggest kahunas up against the fence and that is just not the case. If there is a guy that is equally as quick as you and they are running the bottom they are going to pass you every time. I felt like my speed needed to slow down to make that corner better. I felt like I was doing a good job, but when you are leading like that you never know. I felt like I was getting by lapped cars at a decent pace. That is kind of all you have to judge off of.”

While working traffic Stewart made a conscience effort not to spin the tires through the slick in the corners. He’s lost so many races by not being patient on the throttle. He wanted to keep the car from spinning the tires off the corner which kills momentum and opens the door for others to pounce.

“It is one of those things you have to tell yourself to keep the car underneath you,” mentioned Stewart. “As soon as you get it out from underneath you and start spinning your tires it takes a whole straightaway for you to get your car back underneath you and get your speed back up. I tried to concentrate on that as much as I could. I tried to pretend I was Donny (Schatz). He’s a master of running through the middle at every track, especially here. I watched video after video trying to study certain people the way they’ve raced here the last couple of times. Logan (Schuchart) has been really good on the bottom and Jacob was tonight. You just have to race this track different then you used to four or five years ago.”

With a win now in their pocket, Stewart and company have some of the pressure taken off. They now get back a little bit of confidence that has been lacking the longer the dry spell lasted. They now know the hard work they’ve put in has paid off. The changes they’ve made to the program are steps in the right direction.

“Confidence is everything is our sport and we haven’t had a lot of confidence in our team,” stated Stewart. “To finally get a win going into the Month of Money feels really, really good. I felt like that we kind of got on al little bit of a package here the last couple of weeks. I was okay at Attica and we dialed ourselves out in the feature. I felt good qualifying there, felt good in my heat race there and my dash wasn’t terrible. I think we just made too many changes on the car and threw us out the ballpark a little bit. I feel like now we have a package we can work with and continue through these tracks. I don’t see us going to sticky race track unless it rains or Mother Nature throws her hand into the equation. We’ll see how it all plays out. I feel like we have a decent combination now that we can work off of.”

Stewart will hope that package is good again tonight as he’ll look to pocket another good payday in Friday’s Night Before the Kings Royal feature.