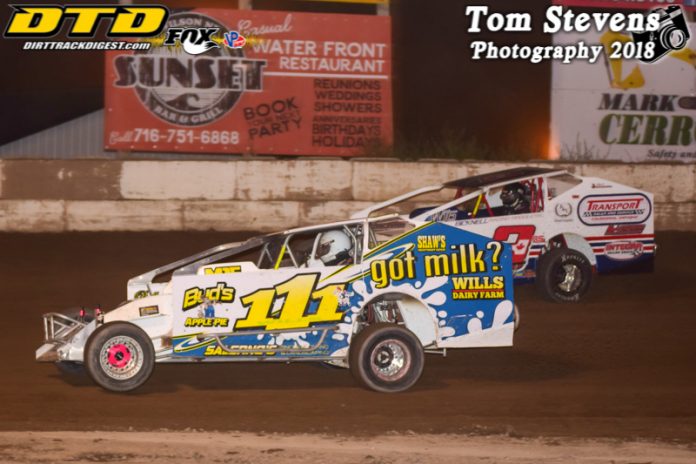 “That Guy” Mike Kramarz and Pat Dell were on the front row for the second running of the John Susice Memorial for the KiPo Chevrolet Street Stocks with Kramarz showing the way from the drop of the green flag. Brandon Sherwood would go three-wide with Jaren Israel and Chris Dziomba to move from sixth to fourth in the running order on lap three as the former track champion was working his way up through the field. Ken Camidge spun, in turn, one with Rob Murray being collected to bring out the races first caution on lap four. The early race restart would see Kramarz and Dell battle into turns one and two with Dell taking the slight advantage at the start-finish line with Sherwood, Pete Stefanski, and Jaren Israel racing in the top five. Sherwood’s race would come to an end after going into the pits on lap six. Israel and Stefanski made contact going into turn three on lap eight with Joey Zimmerman getting the worst of the impact as Zimmerman had no-where to go and hit the turn three wall, causing tons of damage to the Zimmerman racer. Joey climbed out of his car under his own power. The restart would see Dell edging out Kramarz for the lead as Dziomba would take third with Cory Sawyer and Bryce Richardson racing in the top five. Sawyer would challenge Kramarz and Dell for the lead at the halfway mark. Sawyer would take the lead away on lap 17 with Dell challenging and regaining the lead just one lap later. Sawyer would regain the lead with 10 laps remaining after completing the pass on Dell exiting turn four. Kramarz would challenge Dell for second in the late going with Dell holding him off. Sawyer got loose with three laps remaining, allowing Dell and Kramarz to reel in the leader. Sawyer would hold off Dell and Kramarz to score his third win of the season. With it being Sawyer’s third win, his motor has been pulled. Results are unofficial pending the results of the motor tests.

Allan Wills and Mike Williams were on the front row for the Krown Undercoating Modifieds feature event with Wills getting the jump with veterans Scott Kerwin, and Chad Brachmann raced for third place. Brachmann went underneath Williams to move into second place as Allan Wills started to pull away from the field. Ryan Susice would take third away on lap three from Williams. As Wills pulled away, Susice would start to reel in Brachmann for the runner-up position. The leader would hit lap traffic on lap 11. John Smith would come to a stop on the backstretch to bring out the caution on lap 14 to bring out the caution, erasing Wills’ 2.8 second lead over Brachmann. The restart would see Wills jump back in the lead over Brachmann, Susice, Scott Kerwin, and Erick Rudolph. Wills would go on to score the win, his first of the season.

Qualifying heat race winners Justin McKay and Robbie Johnston shared the front row for the 25-lap feature for the Investors Service Sportsman with Johnston leading the opening circuit over McKay and Garrison Krentz. AJ Custodi came to a stop on the front straightaway to bring out the races caution on lap two. The restart would see Johnston out-sprinting McKay going into turn one, but it was McKay taking the lead away at the start-finish line. Johnston would clear McKay for the lead on lap seven, as the top three would pull away from the field. After a caution on lap 15, Robbie Johnston and Garrison Krentz brought the field back to the green flag with Krentz taking the lead away from Johnston. Krentz would pull away from the field to earn his second win of the season.

Ashley Blech and Nick Tarnowski brought the Gippsters Collision 4 Bangers to the green flag for their 15-lap feature event with Tarnowski leading lap one. Jason Harris and Cole Susice got together on the backstretch to bring out the races first caution. The early race restart would see Matt Hornquist take the lead away from Tarnowski with Blech, Chad Desso, and Steve Matson racing three-wide behind the lead duo. Desso would battle Tarnowski for several circuits for second place as Hornquist would pull away from the field. Desso would clear Tarnowski on lap six as “Mr. Peanut” Ryan Plante and “The Notorious One” Chris Leone raced inside the top five. Desso would go after Hornquist for the lead in the late going as Desso would take the lead with four laps remaining. Desso would go on to score his second straight win and third of the season.


Qualifying heat race winner Brian Monahan Jr and David Fingerlow were on the front row for the 15-lap feature for the Stevenson’s Hardware Novice Sportsman with Monahan jumping into the race lead with Fingerlow, Bubby Pawlak, Cody Wolfe, and Kenny Washburn racing in the top five early on. The top three of Monahan, Fingerlow, and Wolfe would pull away from fourth-place running Pawlak. Fingerlow would hit the turn two wall to bring out the caution on lap 12, setting up a three-lap shootout. Off the restart, Monahan would hold off a late charge from Cody Wolfe to earn his first career open-wheeled victory.

NEWS AND NOTES: David Fingerlow drove Kyle Wendt’s Sportsman in the Novice Sportsman division after Fingerlow’s #33 suffered a broken driveshaft during pre-race hot laps. Kids in attendance had the chance to go Trick-Or-Treating before the racing action got underway. The speedway would like to thank all the teams that supported Halloween Night! Kids also had the chance to race their Power Wheels on the track during intermission.

Next Friday night, Modern Disposal, Jetport Lounge, Niagara Lazy Lakes Resort, and United Materials presents a full card of racing. All Veterans will receive FREE admission with proper ID. Pit gates open at 5 pm, with grandstands opening at 6 pm, and the first green flag of the night set to wave at 7:15 pm.