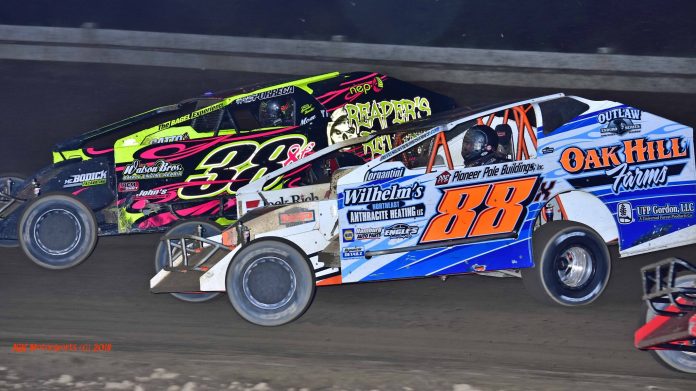 POTTSVILLE, PA – After taking the lead on lap 13 of the 25-lap main event, Craig Von Dohren looked to have things well in-hand for the remaining half of the race but a series of late cautions and a very racy Duane Howard made the Oley, PA earn his money Friday night at the Schuylkill County dirt oval.

It was a Friday the 13th kind of night with the multitude of cautions that seemed to permeate each feature event on the night.

In the 25-lap main event for the Mattera’s General and Electrical Contracting 358 Modifieds, Scott Albert shot to the lead from his front row starting spot and started to put a little distance between himself and the field in the early stages of the race. Albert was able to hold the lead through a pair of restarts early on with Jeff Strunk breathing down his neck.

While those two drivers raced out front, it was the race within the race behind the leaders that most people had their eyes on as Von Dohren, Howard and Ryan Godown all were charging to the front to see who could get to the front first. Von Dohren made the first key move when he was able to get a good run off turn two to get by both Frank Yankowski and Howard to move into the third spot.

It took only two more laps for Von Dohren to take second away from Strunk and set his sights on the leader Albert. Albert who was having his best run of the season so far held strong but was no match for the low riding Von Dohren who made his way past Albert and into the lead on lap 13. The yellow came back out on lap 17 for Steve Young and during this caution points leader Ryan Godown stopped in turn four and had to be pushed to the pits ending his night.

On the restart, Howard was able to get by Albert for second and start his pursuit of the leader Von Dohren. CVD looked to have everything in hand as he was able to maintain a safe distance between himself and Howard. Another caution flew on lap 22 setting up a classis restart between the track’s two all-time winners and longtime rivals.

On the restart the two drivers raced side by side for the win with Von Dohren able to wrangle the lead coming off of turn two with the advantage. Again, it seemed like CVD had the race in hand until the yellow once again was displayed on lap 24 giving the Howard another shot for the win. During this caution the third-place car of Albert coasted to stop out of fuel ending his great run.

The cat and mouse games were in play as the two drivers were each trying to out trick each other to see who could get the advantage and the win. Howard seemed to have the advantage when we back to green, but the start was called back when it was determined Howard might’ve jumped just a little too soon. The field was re-racked for another restart and this time Howard was ready and timed it perfectly as Von Dohren mashed the throttle. Howard grabbed the advantage down the front and into the turn one on the outside but Von Dohren who was getting great forward bite coming out of turn two all night was able to fight off Howard to regain the top spot. Going into turn three Howard dive bombed the corner and did a slide job on Von Dohren to take the lead. Von Dohren crossed back over to the bottom coming out of turn four to try and regain the lead and the finish had all the makings of a classic on but wait, the yellow was out once again depriving the fans of a drag race to the line for the win.

The next restart proved to be the final one and this time Von Dohren was ready for anything Howard had to throw at him and was able to hold him off for the win. After Von Dohren and Howard it was Jeff Strunk, Frank Yankowski and Ryan Krachun rounding out the top five.

It was a caution filled event for the USS Achey Sportsman with veteran Doug Hendricks holding off the points leader Alex Yankowski for the win in a race that ended after 14 laps due to the numerous caution flags that put the event over their allotted time limit.

Matt Clay was the early leader, but Hendricks was on a mission early on taking over the lead on lap four from his seventh place starting spot. The pace was slow early on with multiple caution flags being displayed as the field tried to sort itself out. Yankowski was also on the move and had worked his way up to fourth when the yellow was displayed once again on lap eight.

Hendricks was able to remain out front on the restart with Yankowski moving up the runner-up spot on lap nine. Hendricks was up the task this night as he was able to keep a safe distance between himself and Yankowski. Yet another caution flag displayed on lap 14 and at this time the drivers were informed that the next flag they will see will be the checkered flag as the race was exceeding the time limit.

It didn’t take long as Dave Dissinger spun in turn two and with that the race was over with Hendricks taking the win over Yankowski. Wayne Witmer

The No Sweat Service Group Street Stocks were back in action this Friday night with Chris Heller holding a late race charge from Mike Radocha to take the win. Joey Brennan was the early leader setting a fast pace until a lap five caution slowed the pace as the leader Brennan coasted to a stop. Brennan’s misfortune handed the lead to Heller who once in front never looked back as he sped off to the win as the field raced hard behind him. It was Heller for the won over Radocha, Elvin Brennan III, Jeremy Becker and Dean Hine.

Chris Holland was the winner of the Savage 61 Road Runner 20-lap feature event after surviving an almost near spin in turn four to take the win. Matt Ney was the early leader with multi-time winner Mike Reichert on the move. A terrific four car battle would ensue for the next set of green flag laps between Ney, Reichert, Holland and Jim Kost. The four cars would swap spot each and every lap with Holland coming out on top when it was all said and done. Holland would take the win surviving some late race restarts over last week’s winner Shon Elk.

The modified heat races were won by Duane Howard and Jeff Strunk.

The sportsman heats were won by Matt Clay, Doug Hendricks and Craig Whitmoyer.