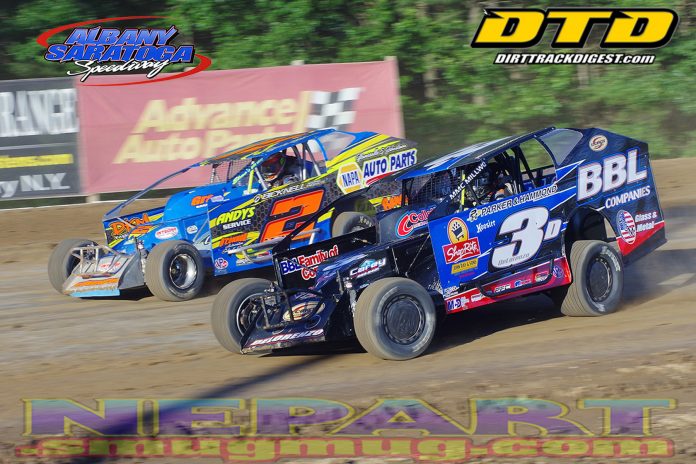 MALTA, NY – Matt DeLorenzo got tired of fighting, so he decided to switch.

After battling with his balky Bicknell chassis for the past month and only cracking the top 10 once in a regular Friday night show, DeLorenzo spent the week changing his chassis setup and it resulted in his second win of the season in Friday night’s 35-lap modified feature at Albany-Saratoga Speedway.

“We went from coils back to bars,” he said in victory lane after the feature. “We’ve been in the shop all week, working until midnight. We just went back to our standard car and it paid off.”

Because of his run of mediocre finishes, DeLorenzo started seventh in the field and finally moved out in front on a restart on lap 19, getting a good jump on leader Bodie Bellinger and taking the lead going down the backstretch.

Two later restarts allowed Brett Hearn, looking for his second straight win, to move into the top four and poke his nose into the battle for second, but DeLorenzo had his car hooked up in the outside groove and no one could catch him. “I was good on top, so I just stayed there,” said DeLorenzo. “I was waiting for someone to stick their nose in on the inside, but no one did, so I just it hung out on top.”


DeLorenzo received a $500 bonus from Amsterdam Trailer Repair for his win. If he had a rearview mirror, DeLorenzo would have seen a whale of a battle for second, as Hearn just nipped rookie Jack Lehner, with Marc Johnson just another breath or two away in fourth. Bobby Hackel IV got up for fifth.

It was a strange night for two track favorites. Ken Tremont Jr.’s problems began in his heat race. Tremont passed Demetrios Drellos for fifth place going down the backstretch on the final lap, but Drellos then drove right into the rear of Tremont’s car in the third turn, spinning him out. In retaliation, Tremont drove through the infield and crashed into the front of Drellos’ car right in front of the flagstand. After a discussion with track officials, Tremont loaded up his car and went home.

Ronnie Johnson made it to the feature, but no further. He was involved in a multicar wreck on the first lap, suffered a broken shock tower and was done for the night.

After winning races in New Jersey and Delaware earlier this season, Broadalbin driver Adam McAuliffe finally won in his own backyard, taking the checkered flag in the 25-lap sportsman feature. McAuliffe started on the pole and led all 25 laps, and had a full straightaway lead until a yellow came out with two laps to go.

But McAuliffe held off Chad Edwards to get the win, with Jeremy Pitts third. Tim Hartman Jr. came from his 13th starting position to finish sixth, and received the $352 John Proctor Memorial Hard Charger Award from Riberdy Contracting.

Kenny Martin picked up his fourth win of the season in the 25-lap pro-stock race, taking the lead on lap 17 and then outrunning Norm Loubier in the caution-plagued feature. “We’ve got to straighten some of these guys out,” said Martin after the win, which included a $200 bonus from Amsterdam Trailer Repair. “We need cleaner racing. We really do.”

John Stowell drove to his second win of the year in the limited sportsman feature, while Jimmy Duncan picked up his first win of the season in the street stock feature, which saw veterans Randy Miller and Al Relyea play a game of demolition derby after a yellow on lap 17, with both drivers getting disqualified.

The CRSA Sprints made their first appearance of the season at Albany-Saratoga, with Matt Tanner of Stephentown getting the win. Jeff Trombley, a former mini-stock champion and modified winner at Albany-Saratoga, gave Tanner a good battle, even taking the lead at one point on lap 15, but Tanner was able to pull away while Trombley had his hands full holding off Darryl Ruggles. Trombley wound up second, with Justin Mills getting around Ruggles for third.