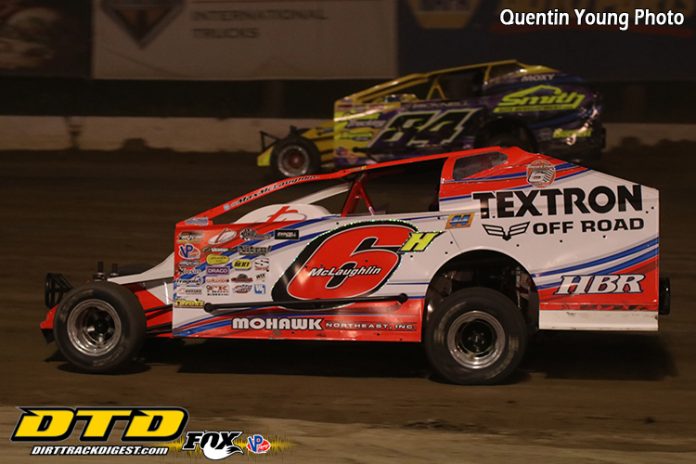 BREWERTON, NY – Max McLaughlin made the magic happen at Brewerton Speedway, charging through the top ten and to the win in a wild Modified main.

Katelyn Hile, fresh off a heat win earlier in the night, took control of the lead at the start of the 35-lap main. Hile paced the field for the opening laps before the lone caution of the event flew with five laps completed, as Tim Sears Jr. spun to the bottom of the backstretch with a broken front end. Hile continued to lead soon after the restart, but the action was just getting ready to heat up.

Ronnie Davis III darted to second when racing resumed, and he wasn’t done there. Davis got a good bite off the bottom of turn four to lead lap nine, then threw a slide job on Hile to complete the pass entering turn one. Gary Tomkins moved to second, clawing down low at Davis for the lead. With ten laps in the books, the front half of the field was under a blanket.

As fast as Ronnie Davis III went to the front, his night went south even faster. On lap 12, Davis lost the handle entering turn one and found himself sideways in front of the pack. Tomkins hit Davis’ front end with his right rear tire, knocking Davis back the right direction with only a couple spots lost. Tomkins was fine, only losing the lead to Andrew Ferguson for a moment, but Davis retired to the pits a few laps later with a flat right front.


By halfway, Tomkins opened up a small lead over Ferguson, Tom Sears Jr., and McLaughlin. In the course of two laps, McLaughlin slid around both Sears and Ferguson to be scored second on lap 19, then faced with the task of chasing down Tomkins. Pat Ward was the next beneficiary of the game of musical chairs for top five positions, climbing to third by lap 21.

Larry Wight started last but wouldn’t stay down for long, throwing a wild slider to go from sixth to fourth in a single turn with 24 circuits completed. Up front, Gary Tomkins three-quarter straightaway lead over McLaughlin was gone.

Max McLaughlin first showed Tomkins a nose on lap 28, but couldn’t get past. McLaughlin stayed persistent down low with Tomkins up top, and persistence soon paid off for McLaughlin.

With McLaughlin gaining ground and being scored the leader on lap 31, Tomkins had to venture away from the high line he was recently married to, moving down low in a last ditch effort to hold of McLaughlin. Tomkins’ defense wasn’t enough, as McLaughlin rolled past and securely into the lead.

After a few final flawless laps for the North Carolina native, it was McLaughlin claiming his first Brewerton and second overall win of the year over Tomkins, Tom Sears Jr., Ward and Wight.

“That was a fun racetrack,” said McLaughlin. “I couldn’t really get the bottom going in the middle of that race, and I ran a funky line in one and two, but for some reason it was working. We just sort of found something there I guess.”

Kicking off the features was a Mod-Lite makeup from June, where Justin Williams continued his quest to remain perfect. Mike Mullen gave chase, but spun with half a lap to go while making one final push. Mullen got his car restarted and only dropped to fourth, but Williams crossed the line first. However, Williams was light at the scales, handing the win to Joe Garafolo.

Later in the night, Justin Williams seemed to be on cruise control to another win, but a caution with three to go bunched up the pack. Williams suddenly had challengers, as Williams, Zack Babcock, and Josh Kinney were three wide for the lead with two laps left. Kinney used the high line to perfection to slide around Babcock and Williams to score his first win of the year.

Another stellar Sportsman field with a mid-40s car count saw two features, and two very different features at that. The first event saw Zack Sobotka reach the front of the pack early on and fend off numerous charges by Billy Clark to grab the checkered in the caution free race.

The second main, on the other hand, was riddled with cautions and arguments. Scott Prentice got by Jeff Taylor around halfway to take over the lead, but Prentice found himself backwards just seconds later. Much to his objection, Taylor was sent tail and Alan Fink inherited the lead, a lead Fink never relinquished en route to another victory.