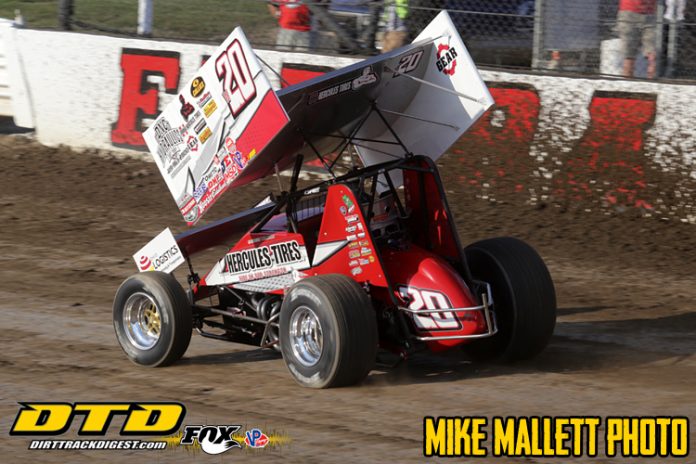 ROSSBURG, OH – The Night Before the Kings Royal paid the winner of the 30-lap World of Outlaw event $12,000. As the calendar gets closer to the $50,000 to win finale the air was getting thicker with anticipation.

The field of cars grew from 46 to 53, the race seemed to be a bit more aggressive…You can tell the build up was getting more intense. However, when the checkered flag was dropped there was Donny Schatz taking his oh so familiar role of standing in victory lane.

Schatz passed Brian Brown for the lead on lap 10 and won this battle easily. Can you sit back and say “Oh here we go, same old story, it’s going to be Schatz again.” Well, yea, you can. I mean it’s kinda like the Golden State Warriors, a team will throw them their best shot but usually it will be the Warriors holding the trophy.

That scenario can be played out with the Outlaws and with Mr. Schatz. If I was making a wager and was getting a little more than 1 to 1 odds, my money is on Schatz.


Wha.t Friday’s program did show was that there were a few willing to throw out their best shot. They gave the big crowd some hope and something to talk about going into the final night.

Greg Wilson, the likable, lower funded Outlaw regular has beaten the best at Tony Stewart’s shrine before and when he started in 14th, methodically moved his way up to the runner-up slot at lap 30 many took notice.

Wilson himself took notice, “When they have the track like this it just makes for great racing, how can you not like that? The cars were all over the track,” Wilson then wanted to make a point. “I get upset with some of those internet folks that says the track needs bite and a big cushion. No it doesn’t, that just beats the crap out of your car and you can’t pass. Tonight there was passing all over the place and there were cars making moves.”

Wilson admits he’s not that beat your car on the cushion type of guy but when you watch last night’s A-Main his quotes have merit. He also will be going into the final night with some momentum.

“The key for tomorrow is to first get into the race. The track might be a little different but after tonight I feel we have a little bit of a baseline to work with,” Wilson continued with an upbeat tone. “I just hope the track widens out again where you can run the top, middle and bottom.”

The $50,000 win for a guy like Greg Wilson is a dream result and while you might think odds are stacked, he does have a legitimate shot.

“This was Eldora tonight, this is what I grew up watching Steve (Kinser) and Sammy (Swindell) banging off the wall with a little cushion and then you can also move all over,” he then talked about the ending.  “I think I was gaining on Donny and I sure would have like a yellow to where we could have been battling in turns three and four on the last lap. If that happened I can tell you he wasn’t going to win!”

For Wilson he had a plan after he left the pits, it was a simple one.

“We were the second best car tonight but I’m going to lie down with the kids tonight in the air conditioner and not think too much about tonight,” he said. “Seems like every time we think, we over think. None of that tonight.”

For Dave Blaney his fifth place finish from 22nd had some folks talking as well. The 1993 and ’95 winner of the event could very well carry the scepter and wear the crown one more time. He has good equipment, he’s got help from his brother Dale, who also won the Royal in 2000.

Blaney I guess, along with Swindell, can be considered the last of the “Old Guard.” You might not pick him to win but if he did actually pull it off you might not be surprised as well. Blaney drives Eldora well and has many wins. So eyes should be on the No. 70.

“It was a good run for us, we had a real good car for the track and was able to make up quite a bit of ground,” said the former Ohio native now residing in North Carolina. “With the race going non-stop and if you had a car hooked up you can really gain on some cars.”

Blaney always sums up his night as a matter of fact and realizes each night can change with a snap.

“We have been good on tracks like this for the last month but with so many good cars here one night you can qualify great, the other you’re in the back of a heat race,” he continued. “We will just see what tomorrow brings.”

Before the interview, it had to be asked and I know Dave, he doesn’t get far ahead of himself. He’s a veteran and a Sprint Car driver that has done it all. But, still had to be asked if Dave Blaney won the Kings Royal?

“Oh it will be my biggest accomplishment by far…but, first I have to get into the race.”

That my folks is Dave Blaney.

Hunter Schuerenberg is another wingless driver that has either dabbed or possibly looking to move over to the winged family. And like most, he’s had some success and also has some forgettable nights as well. But when he moved from his sixth place start to the lead in one corner that set up his night!

“They kind of parted the seas for me there on that start. I had an opening and here you have to go for it,” Quipped Hunter.

He went on to win the heat with ease, put himself in the dash where he won with ease which put himself outside pole.

His No. 97 stayed right behind the leader Brian Brown for nine laps and was still solidly in the top five until the final stages where he brought his mount home in seventh. It might not be a headline making finish by any means but for 3/4ths of the night this non-wing guy was also the talk of the town.

“For me to have some success like we did tonight here against the Outlaws sure you can call that something to build on,” he said, but then quickly turned the conversation into why the late race fade.  “But, we need to figure out why we faded there at the end. I thought I still had a good car under me but for some reason they were getting by me both high and low.”

He then went on summarizing and also on a what he needs to do for the Kings Royal final.

“I think we might have to look into our tire prep, maybe we were losing a little there,” then the bombshell. “Now though I think we just cooked our second engine in as many nights. Looks like we will have to borrow one from Charlie Fisher just to race tomorrow. It’s a bump in the road but we have a good team here and we will be ready.”

Sammy Swindell’s time was wiped away as he was not wearing proper, Outlaw approved head and neck restraints. He ran a few laps in the D-Main and then called it a night…

So far the red lights have not been turned on for Kings Royal weekend….lets hope the trend continues.