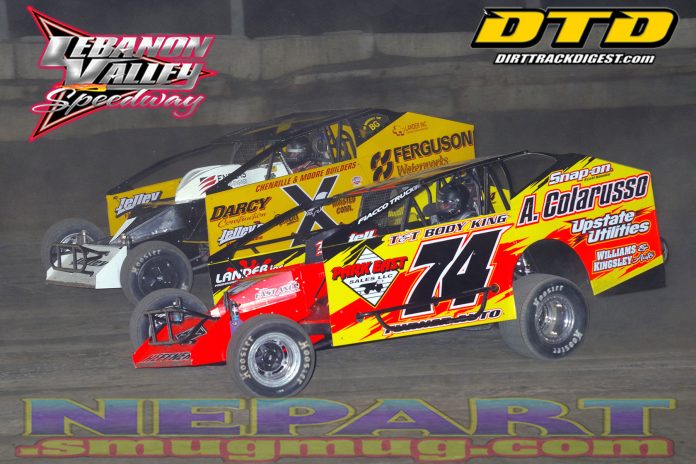 WEST LEBANON, NY – Saturday night saw Rifenburg Construction back the annual King of the Track night. $5500 was on the line and everyone would race hard to get it.

Olden Dwyer started from the pole and led early while Mike King stalked him. On lap 3, King was able to get past and took over the lead. J.R. Heffner, who started sixth, followed King past.

It did not take long for Heffner to get to King for the lead. King definitely did not make things easy. The two veterans battled for more than 10 laps. King had the outside line and fought off Heffner’s advances as best as he could. On lap 16, Heffner was finally able to make the pass for the lead stick. Once out front, Heffner began to pull away.

Further back, the track conditions made it rather difficult since everyone had a decent amount of grip. Brett Hearn started in ninth and had some difficult running his way up through the field. Kenny Tremont Jr. started 15th and effectively went nowhere, finishing 14th.


Heffner will take the momentum of winning into Eldora on Wednesday, but all he could talk about was his duel with King.

“Mike King did an awesome job,” Heffner said after the race. “That race could have gone either way. I was just a little bit better. It was amazing how well he did.”

Behind Heffner and Hearn was King with his best run of the season in third. Jelley was fourth, while Kolby Schroder was fifth.

The Small Block Modifieds had a more physical feature than usual. Alan Houghtaling started from the pole and led early with ease. Dwyer gave chase.

The first few laps were relatively tame as Kim LaVoy was able to take second from Dwyer and attempt to run down Houghtaling. Then Bryan McGuire’s car caught on fire to bring out a yellow. Then the contact started. Shortly after the restart, Jason Herrington and Ricky Davis had contact that caused him to nearly stop on track.

Then, Timothy Davis smacked the wall in turn 1 to bring out another yellow. A crash on the frontstretch involving Brandon Pitcher and Frank Harper brought out another.

Finally, Andy Bachetti made a three-wide move to the inside in turn 3 and hit Frank Hoard, III. That contact bounced Hoard into Heffner, who hit the wall hard. Heffner was shaken up but walked away. Bachetti was sent to the rear for causing the wreck and finished ninth.

Over the final 11 laps, Houghtaling was able to open up a decent gap on the pack as Tremont moved up the order. Tremont took second from Dwyer with five laps to go but could do nothing to prevent Houghtaling from taking his first win of the year.

Tremont finished second, while Dwyer came across the line in third. Dwyer was later disqualified due to his team exhibiting unsportsmanlike conduct at the pit shack. That elevated Jason Herrington to third. Brett Haas was fourth, followed by Brian Sandstedt.

The Pro Stock feature was once again a spirited affair. Scott Kilmer started from the pole and led early on.

Then, one of the scariest incidents of the night occurred. Nick Arnold jumped the cushion in turn 4 and hit the wall hard enough that his car started rolling. Arnold was then hit by Jon Routhier and Craig Whiting (driving in place of Rich Crane). Arnold was ok, but his car was not. Routhier and Whiting continued after repairs.

Steven LaRochelle stated before the heat races that he thought his car was perfect. He took advantage of his fourth starting spot and quickly moved up to second. On lap 4, LaRochelle was able to snatch the lead away from Kilmer. Shortly afterwards, the lead was confirmed when a yellow flew due to an incident involving Dave Stickles, Frank Twing and Tom O’Connor.

After the fourth yellow, things calmed down a little and drivers finally got into a groove. A pack of five drivers (LaRochelle, Jason Casey, Rick Duzlak, Jay Casey and Rob Yetman) pulled away from the pack with intentions of settling the race by themselves.

Jason Casey did stick his nose to the inside of LaRochelle on a couple of occasions but could not make it stick. LaRochelle was able to hold on to take his second win of the year.

Note: The fourth-place finisher Jay Casey is from Canaan, Conn. while the Jay Casey that finished 25th is from Massachusetts.