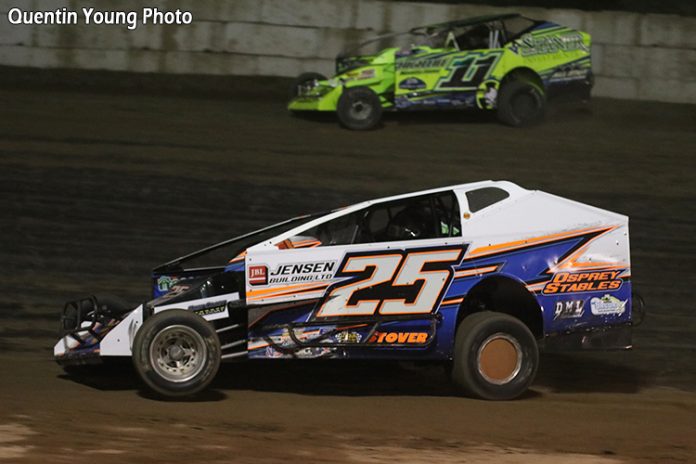 FULTON, NY – In a race filled with high-flying action on the Fulton Speedway cushion, it was Bobby Herrington hugging the bottom and rolling to his first win at the track of the season.

“I’m really excited to be here, but kind of surprised to be honest,” Herrington said. “We haven’t been super good here lately, I thought we were better at the start of the year.”

Modified rookie Tyler Trump grabbed the lead at the start of the 35-lap event, but never got a chance to run away and hide as Tim Sears Jr. spun on the backstretch just two laps into the race. The slide jobs started early and often, as Trump and Todd Root exchanged a pair on the restart. Trump held on for the moment, but Root and the rest of the field weren’t done yet.

Root hung close to Trump, making his next move on lap eight. Trump and Root traded four more sliders for the lead, allowing Herrington and Larry Wight to close fast. With the top four under a blanket, Trump tried one last slide job on Root and lost some time, the move ultimately shoving him back to fourth. Jordan McCreadie slowed to a stop on lap 11 with a broken shock, halting the insanity up front for a moment.


Herrington was able to pressure Todd Root for the lead on the restart, but Root slowly pulled away. Root established a lead of a second and a half by the midpoint of the race, but Root’s lead shrunk as fast as it grew. On lap 22, Root got hung up in the cushion and Herrington was right there to pounce, as Herrington drove to the lead off of turn two.

“Root was getting away from me on the outside, so I kept backing up my entry more and more to make sure I could hit that exit,” mentioned Herrington.  “The more I backed it up, the more I caught him.”

Root wasn’t going down without a fight, drawing even with Herrington with ten to go. However, Herrington fought off the charge and opened up a small lead. Behind the top two, Tom Sears Jr. had caught up to Wight for third, with Pat Ward in tow. Just as it seemed Herrington was in clear sailing, Trump spun with three laps to go to draw a caution.

Herrington got a great launch of the restart, distancing himself from the four car scramble for second. After three more flawless laps around the bottom of Fulton Speedway, Herrington crossed the line for his first win at the track this year. Root, Tom Sears Jr., Wight and Ronnie Davis III completed the top five.

Two Sportsman features, two thrillers. Nate Higgins dominated the first event, but a late race caution bunched up the field. Chris Mackey found the top of his liking, charging to the front in the final laps. Mackey reached the front without a moment to spare, rocketing off the top of turn four to beat Higgins to the line by .07 of a second.

Mike Phelps got to the lead early in the second main, setting a torrid pace early. However, Nick Krause reeled in Phelps in the late stages, reaching Phelps’ rear bumper in the final circuits. Phelps went low on the last lap to pass a lapped car, opening the door for Krause up top. The pair were side by side with half a lap left, but Phelps used the lapped car as a pick to hold off Krause down the backstretch. Krause threw a slider on the lapped car entering turn three, but it wasn’t quite enough for the win, as Mike Phelps scored the win after being upside down last week.

A wild Late Model feature saw Dane Keller seem poised for his first win in the division, but Jason Parkhurst and Chris Fleming had other plans. The trio were three wide for the lead with two laps to go, with Parkhurst splitting the middle and going to the front. Keller tried a slider on the last lap, trading paint in the process, but it was Jason Parkhurst scoring the wild win.