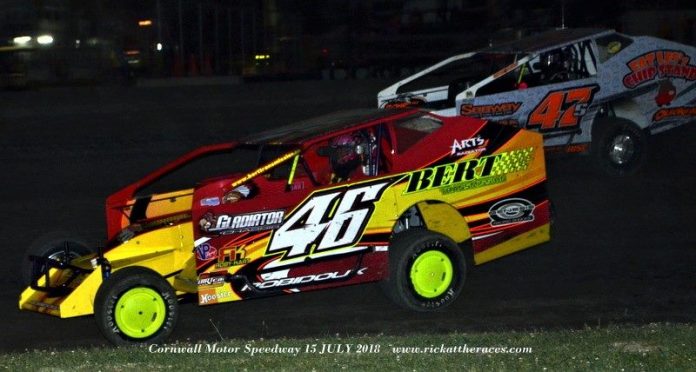 Kayle Robidoux and Tyler Givogue raced side by side for the first few laps in the 30-lap Polar Sound DJ Services Modified feature, Givogue cleared Robidoux for the lead on lap 3. Givogue stayed first with Robidoux in second as Corey Wheeler and Brian McDonald were in now in the top 4 as the caution out was out by lap 12. On the restart, Robidoux passed Givogue for the lead as the feature reached halfway point. Robidoux in front with Wheeler moving up to second and McDonald. Wheeler tried a final charge on Robidoux in the last portion but Robidoux remained in front to get his second feature of 2018.

In the 25-lap Next Level Home Improvement Sportsman, Chris Ferguson was the early leader with Delbert Legrow in second, Legrow passed Ferguson for the lead on lap 4. Bob Ray made is way to second spot as Kurtis Cayer also moved up on to third on lap 8. Brianna Ladouceur had a fast car and quickly jumped to second. A lap 12 restart gave the lead to Ladouceur as Tristan Draper moved up to second. Draper used the outside lane to get close to Ladouceur with 5 laps to go. Ladouceur went on to capture her first feature event of the season over Tristan Draper and Cayer.

Jeffrey Lapalme held the lead for the first 7 laps in the Alexandria Home Hardware Pro-Stock as CD Beauchamp made his way to the front and passed for lead with Lapalme remaining in second and Jocelyn Roy in third. Beauchamp pulled away from the rest of the field and went on to win his third feature of the season.

Yanik Potvin dominated the 15-lap Tracy Wheeler Assist2Sell Mini-Stock feature race, he finished with more than a full stretch lead over the rest of the field!


A big show this coming Sunday as the Patriot Sprints will be in town for their annual trek at the speedway along with the SpeedSTR and Slingshots along with the Modifieds and Sportsman.