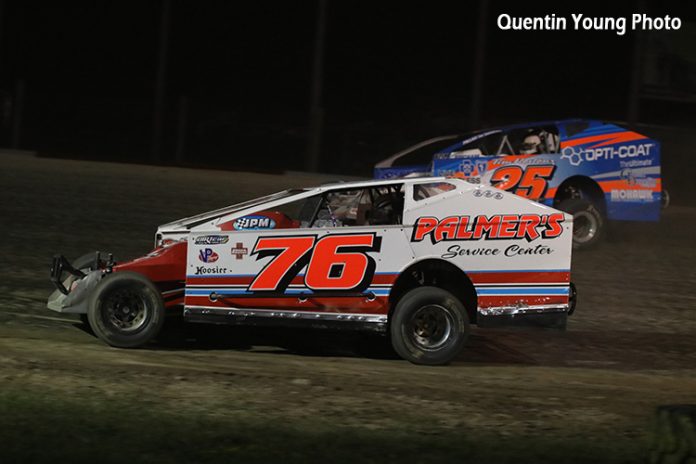 VERNON, NY – Erick Rudolph scratched and clawed his way to the DirtTrackDigest.com 358-Modified victory at Utica-Rome, getting the best of Bobby Varin down the stretch.

“We weren’t really happy with the car after practice or the heat race,” said Rudolph. “We we’re scrambling before the race to make it just right, and it still wasn’t perfect. We have a little ways to go but I think we’re right there.”

Jack Miller grabbed the lead at the start of the 30-lap main, but wasn’t allowed to keep his foot floored for long. Lance Willix and Rocky Warner tangled with two laps completed to draw out a caution, bringing the field back to Miller. On the restart, Varin charged from fourth to first on the high side to take over the top spot. Once in front, Varin ran away and hid.

Marc Johnson slid under Miller for second on lap six, and Erick Rudolph did the same a short time later. However, Varin had already amassed a solid four second lead and wasn’t slowing down anytime soon. At halfway, Varin was on cruise control and seemed poised to snatch his first win at Utica-Rome since 2012.


On lap 18, an infield tire got knocked into the racing groove, forcing a caution to fly. Varin got a great restart, but the pace was slowed just two laps after with a Lucas Heintz spin. This time, Varin couldn’t get away from the pack like he had before. Behind him, Rudolph skated past Johnson for second.

When the money was ready to be paid, Rudolph’s car came to life. Rudolph drew alongside Varin for the lead on lap 22, completing the pass the next time by. Seven laps, three and a half miles later, Rudolph was victorious at Utica-Rome, his last win coming in a King of Dirt event in 2017.

Varin almost grabbed his first win at the track in six years, but came up seven laps short.

“I was just trying to cover all my bases on the bottom, I really didn’t think anybody was going to roll around me,” Varin noted. “He kept poking his nose up there. I knew I just had to miss it once and he’d go by, but I didn’t miss it and he still went past.”

Billy Dunn, Marc Johnson, and Pat Ward completed the top five. While Dunn’s 13th to 3rd run was solid, it wasn’t good enough to pass technical inspection after the race, sending him tail in the final results.

The win gives Rudolph a solid points boost entering the back half of July, aided further by points leader Dunn’s issues after the checkered.

Mark Effner seemed ready for his first Sportsman win of the year, but Matt Janczuk had other plans. Janczuk started deep in the field, but joined Effner at the front of the field by halfway. On lap 12, Janczuk snatched the lead away and dominated the rest of the distance for the Sportsman win.

Shane Henderson dominated the first 95% of the 20-lap Pro Stock main, but a late caution put Travis Welch right on his tail. Welch went to work on the bottom while Henderson rode high, and it was Travis Welch getting by Henderson on the last lap for the close win.

Next Sunday, July 22, will see the kick off the King of Dirt Pro Stock Series plus the annual Mike Martin Memorial for the Broedel Energy Sportsman that will pay $1,000 to win. Also in action on Marble Hill Inn night will be the DirtTrackDigest.com 358-Modifieds and Rookie Sportsman. Another added attraction will be the fan favorite King’s Smash’em and Crash’em Demolition Derby. Racing starts at 7 p.m. with gates opening at 4 p.m.