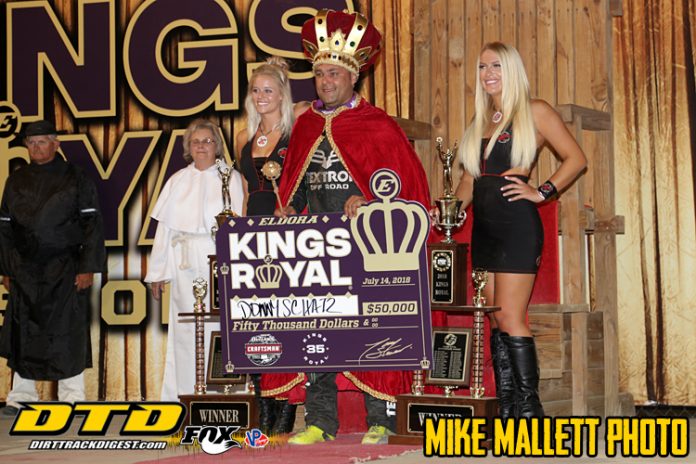 Although there was some doubt in the closing laps of the 35th running of the Kings Royal on Saturday night at the Eldora Speedway, Donny Schatz was once again crowned king for the fifth time in his career. Schatz took the lead early, worked traffic before barely holding off a hard charging Brad Sweet to pocket the $50,000 top prize for the third consecutive time. He became the first to win consecutive Kings Royal races last year.  Now he adds to the history books as the first to win it three times in a row.

“It don’t matter that it’s three in a row, it’s the Kings Royal,” said Schatz after the win. “It’s a testament to this team. These guys have gone through a lot of adversity since the beginning of the year. It’s put everybody in bad positions where we they’ve been at each other all year. To get the performance back while you deal with that adversity, whether it’s three, five or whatever, count your blessings on this. You know, Jason lost his life not too long ago and it could have been any one of us, at any time, any moment.”

It was obvious that Johnson was on Schatz mind after the event as he was cherishing the moment. Normally the straight forward Schatz enjoys a win briefly before turning his attention to the next race. That race comes on Tuesday at Lernerville Speedway for the Silver Cup. This one was different for Schatz.

“You never know what is front of us tomorrow,” cited Schatz. “It’s not for sure for any of us. It’s an eye opener losing Jason. You just have a different outlook on it. I don’t think there is a guy in this pit area that’s looking six months down the road. They are trying to fix everything they can today and enjoy today for today. When you get in those situations it’s just part of the game, but until tragedy happens sometimes it opens your eyes to things that maybe it didn’t in the past. It might open your eyes to a different approach and I think that’s where I’m at right now.”


Schatz reflected on his day which started simply awful in time trials. Schatz has never been one to play the game with the qualifying format. The Kings Royal uses a unique system that inverts the top 30 drivers into six heats with the winner of the sixth heat starting on the pole of the main-event. Due to a poor time trial lap Schatz sat 21st in the rundown. He always goes all out refusing to play the sandbagging game to get a better heat starting position.

“I tried to qualify,” laughed Schatz. “I know everybody in this place thinks we sandbagged qualifying. That’s the worst part of the night. You know we went out there and gave it our best effort and we were 21st quick. I know exactly why we did it. We run our car the exact same way in qualifying that we ran it the night before and it wouldn’t work on the gas. You had to be off the gas to make that setup work. We overthought ourselves. That’s what you do in racing; you try things, you learn things. I know I put in the notebook myself, ‘do not ever qualify like that again.’ It put us in a bad spot, but with the Kings Royal format it put us up front of the heat. In the last two years I’ve started fifth and won my heat. That’s what you want to do. I don’t know that anyone won their heat from fifth tonight but guys got to second. It worked well for us tonight.”

With the poor time trialing run, Schatz went on to easily won his heat race starting him up front in the A-Main. Before getting to the lead, Schatz had an intense battle with California driver Cory Eliason. Eliason worked Schatz over hard. Schatz eventually shook off the pesky challenger.

“It opened my eyes, ‘man this guy was in the C-Main the last two nights and here he is racing for the Kings Royal win. What the hell is going on?’” cited Schatz of Eliason. “He did a great job. He slid me a couple times so obviously he was getting a good run. He’d slide me but I could turn and go back underneath him. That is what you have to do. Sliding is part of this game. Guys get butt hurt over it. It is what it is.”

Once dispatching of Eliason, Schatz placed his sole focus on the race leader Trey Starks. Starks got a great jump at the start of the race. He opened up a sizeable lead before Schatz was finally able to track him down. Schatz made the pass of the bottom of turns one and two before completing the takeover of the top position in turns three and four.

“Stark set a good pace,” commented Schatz. “He was doing pretty good. I thought, ‘man you didn’t expect him to and he did. Damn you better pick up the pace.’ I started pushing and maybe I shouldn’t have. Maybe I should have just stayed slow to keep my tires underneath me. I’m not so sure I didn’t abuse them and use them up too much during the middle part of the race. That might have been the determining factor for being slow at the end.”

Without hesitation Schatz talked about how uncomfortable he was toward the end of the race. He just couldn’t get the usual drive through the middle of the track that he is so accustomed to. That allowed Sweet to drastically close in the final few laps. If not for a lapped car it might have been a different outcome.

“Somebody had to be becoming,” admitted Schatz. “I felt bad. I couldn’t get the tires caught up on the exit. I was trying to move down to the bottom of one and two but I’d have to get clear to the top to get a little bit of that meat. It just wasted so much time. It felt awful. When you are leading you got everything to lose and nothing to gain so you kind of got to move around and be smart with it. I could not find anything. I was hanging. I had the wing in the trunk. I was trying every trick in the book. We got pretty lucky it was only 40 laps and not 41 tonight.”

Postrace Schatz was once again treated by a booing crowd. It’s something he’s grown accustomed to. He heard it during driver introductions and again after winning his third straight Kings Royal.

“At first when you get booed it does bother you a little bit but after a while it makes you feel good and that is the reality of it,” he said with a smile. “I’ve never said a bad word or done anything to anybody. I believe in karma. That is just the way it is. Not everybody can like you, not everybody can hate you. They are all here so that’s what we are concerned about.”

The win gives Schatz victories in three of the last four World of Outlaws main-events. More than likely, as the Month of Money gets rolling there will be plenty more boos for Schatz as there are usually plenty more feature wins to come this summer.