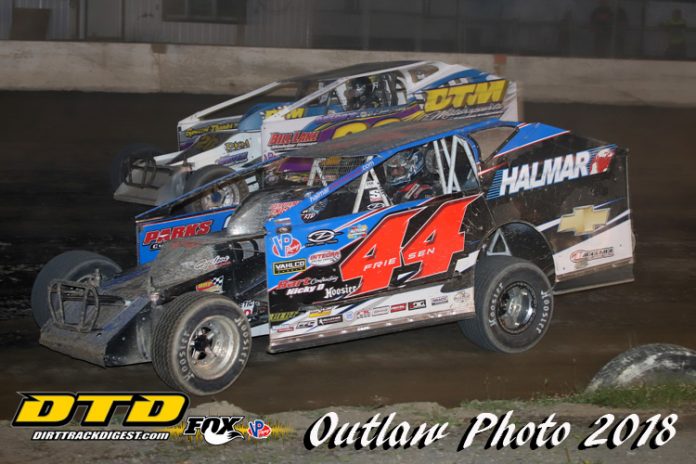 FONDA, NY – Saturday evening at the Fonda Speedway was a special one for the children with “Kiddie Rides” taking place during the intermission on Palmer’s Service Center Night. It was also a special one for the DKM “Cyclone” Team of Erik Mack, Dave Constantino, and Kyle Hoffman as their designed cars swept all open wheel feature events with Stewart Friesen (modified), Dave Constantino (King of Dirt KOD Sportsman), and Derrick McGrew Jr. (limited sportsman) taking feature victories in their respective divisions.

The other two divisions in competition on Saturday at the “Track of Champions” were the pro stock and street stock divisions with Chuck Dumblewski and Rob VanAernam winning their respective feature events.

Scott Huber and fan favorite Jessica Friesen started the 30-lap modified feature on the front row with Huber taking the lead at the drop of Joe Kriss’ green flag. Fifth and eighth place starters Craig Hanson and Palmer’s Service Center sponsored driver Bobby Varin were the new third and fourth place cars on lap three with Hanson the new second place car on lap four after getting by Jessica Friesen.

Huber held a straightaway advantage by lap five when Varin also got by Jessica Friesen for the third position. Ninth place starter Josh Hohenforst moved into the top five on lap nine after getting by Pep Corradi with Stewart Friesen sixth after starting 14th. Stewart Friesen got by Hohenforst for a spot in the top five on lap 12 with the leader in lap traffic on lap 14 when the red flag came out taking away his big lead.


The red flag flew for Demetrious Drellos who got sideways coming out of turn four when a wheel came off the car and the car dug into the track resulting in Drellos flipping the car on the backstretch. The leading car of Huber came on to the wreck and had nowhere to go but tried to avoid direct contact with the Drellos car. Unfortunately for Huber who was leading the event, he clipped the Drellos car and spun with enough damage to the car that he was done for the night.

Hanson inherited the lead, had his choice of lanes on the restart, and after choosing the inside lane maintained the lead at the drop of the green over Varin. Behind the top two was the new third and fourth place cars of Stewart Friesen and defending track champion Tim Fuller with Jessica Friesen now back to the fifth position.

Stewart Friesen pulled away from that point on to his fifth win of the season and the 52nd of his career at Fonda in the Halmar sponsored DKM #44 car over Varin, Hanson, Fuller, and Stewart’s wife Jessica Friesen with her first top five of the season in the One Zee Tees sponsored #1Z.

“We have a real competitive race team here,” Stewart Friesen told victory lane announcer Dan Haslun in victory lane. This is awesome for the DKM Team as they have been working real hard on these racecars for three years now. It was a great race with Bobby and Craig, they were moving around the track to find the fast way around, left me the inside, and I was able to get by them to the lead which was a little unusual as this car doesn’t normally like the inside. It was also a great night for my wife Jessica as she was able to get her first top five finish of the season.”

Tony Farone and Dave Constantino brought the 30 car field down for the green flag to start the 30-lap King of Dirt (KOD) sportsman feature with Farone getting the early race lead. An early yellow flag on lap two for Tim Hartman Jr. slowed the field after Hartman drove the car on the front stretch infield and was done for the evening at that point.

Farone held the lead on the restart until lap five when Constantino got around him on the outside of turn four and took the lead away, and despite contact by Farone just outside of turn four Constantino got sideways momentarily but was able to straighten it out and continue on in front of the pack. One lap later the yellow was out again this time for Farone who was off track on the infield on the backstretch. Farone was done for the night at that point with fourth place starter Jeremy Pitts the new second place car.

The yellow was out again on the restart for a multi car wreck in turn two causing race director Denny Tilison to go to a single file restart format. Constantino held the lead on the restart with Cody Clark the new third place car after starting eighth followed by Chad Edwards who started 16th in the feature event. Edwards was able to get by Clark for the third position on lap 10 with another yellow out at that point for Griffen Mansmith who was in the turn four wall.

The top three of Constantino, Pitts, and Edwards stayed the same on the restart with ninth place starter David Schilling the new fourth place car after getting by Clark for the position with the final yellow of the event coming out on lap 17. Pitts stayed close to Constantino for a couple of laps after the restart but once Constantino got into a rhythm he was able to pull away to a big lead.

Despite lap traffic for the final two laps of the event, Constantino cruised to the win in the West End Towing, Ray Sefrin owned car over Pitts, Connor Cleveland who moved to the front late after starting 12th, Schilling, and 10th place starter Nick Scavia.

“Restarts were tough,” Constantino told KOD Series announcer Mike Warren on victory lane. “Jeremy (Pitts) was real good on the restarts and its tough running against one of your own designed DKM cars like he has. The motor in this car has a lot of laps on it and maybe a little weak but I love racing around the top of the Fonda Speedway.”

Pole position starter Ron Delease led the 20-lap pro stock feature at the drop of the green flag with Randy Cosselman second. On lap three on the inside of turn four, Cosselman got by Delease for the lead with Jim Normoyle now second after starting fifth. A yellow flag slowed the event on lap seven and on the restart Normoyle was the new race leader with ninth place starter Josh Coonradt now second.

At the halfway point in the event, Normoyle, Coonradt, Cosselman, sixth place starter Chuck Dumblewski, and AJ Walters completed the top five with another yellow out at that point. On the restart, Ivan Joslin drove over the left rear wheel of Walters brining out another caution with heavy damage to Joslin’s car taking him out of the race with Walters able to continue on.

On this restart it was Coonradt who took over the lead with Dumblewski now third behind Normoyle with eighth place starter and defending track champion Kenny Gates in his Palmer’s Service Center sponsored car now in the fourth position. Normoyle’s great run came to an end on lap 13 while running second putting Dumblewski and Gates in position to challenge for the win.

One final caution slowed the event on lap 17 with the lead changing hands on the restart again as Dumblewski took it over. Dumblewski and Coonradt were side by side for the remaining two laps with Dumblewski getting the win by less than a car length in the NAPA Auto parts of Amsterdam sponsored #7D over Coonradt, Gates, Walters, and 11th place starter Cassidy Wilson.

For Dumblewski it was his first win of the season and the 12th of his career in the division at Fonda.

“This feels great,” Dumblewski said in victory lane. We’ve had a lot of bad luck and a lot of close calls so far this year so this definitely feels good.”

The 12-lap street stock feature saw Cliff Haslun lead the first 11 laps of the event after starting on the pole. On a restart with one lap to go, Rob VanAernam was able to get around Haslun on the outside and take the win, his second of the season and the 40th of his career in the division over Haslun, defending track champion Johnny Young, Jason Samrov, Michael Arnold, Kenny Hollenback, Greg Havlichek, and Steven Young.

The lead position wasn’t the place to be in the 15-lap limited sportsman feature as Michael McCallion led the first two laps of the event before spinning his car in turn two handing the lead over to Dylan Eldred. When Eldred slowed on the backstretch when it looked as though he was going to the pit area, the second place car of defending track champion Cory White slowed behind him with both cars going to the pit area at that point handing the lead to eighth place starter Derrick McGrew Jr.

Next Saturday, July 21 will be EMS/Fireman Appreciation Night at Fonda along with a Driver Meet & Greet. Starting time for the regular division racing program will be 7:00 p.m.