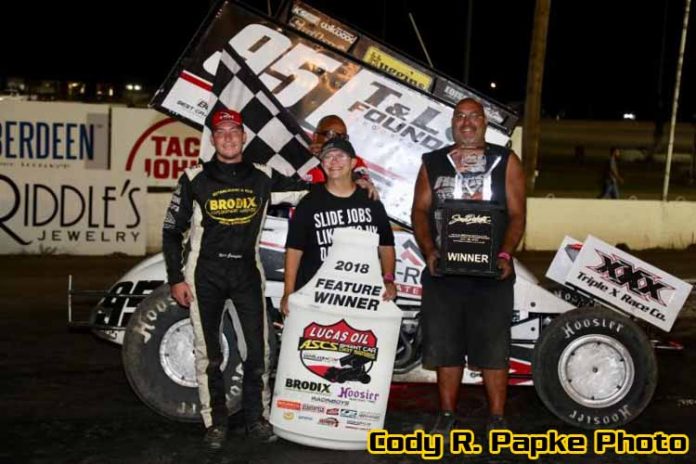 ABERDEEN, SD – Dropping back on the start, Matt Covington did not stay there long as the T&L Foundry No. 95 adjusted his line to the cushion and plowed his way to the lead, as well as his third win of the season with the Lucas Oil American Sprint Car Series presented by Sawblade.com at Brown County Speedway.

“Sometimes that the benefit of running second. Going into the race, it looked they had been trying to get the top to come in and I figured it would at some point and luckily I was right this time,” commented Covington of this third win of the season with the Lucas Oil American Sprint Car Series presented by Sawblade.com.

Presented by Brandt Agricultural Products, the Monday night showdown was the debut visit to the Aberdeen, S.D. oval with Covington picking up $3,000 for his win.

Dropping to second on the start, Covington trailed Canada’s, Skylar Gee. Adjusting his line up the track as the race rolled into Lap 5, Covington rocketed into the lead on Lap 6 with Seth Bergman following to second.


Caution on Lap 7 for Ned Powers who had a heavily damaged front end, the restart saw Bergman take his shot at the lead with no success, only to have his night end two laps later with a fueling issue on the Corridor Electric No. 23.

Restarting with nine laps complete, Skylar Gee moved back to second and began searching the track for a way around Matt Covington. Moving half a groove down the track, Gee found the center line coming in. Getting a run just a few laps after the restart, Gee pulled to the inside of the No. 95 for the lead off the second turn, but couldn’t secure the pass. Showing Covington the line, the Oklahoma driver quickly adjusted his line.

On Skylar nearly getting the pass, Covington said, “I saw someone. I wasn’t sure who poked their nose in on me, but it worked out where he showed me the rubber and I was able to stay ahead and close the deal out.”

Green the remainder of the feature, Matt Covington found the back of the pack late but was unphased by traffic to win by 0.917 seconds.

Skylar Gee in second was joined on the podium by Sam Hafertepe, Jr. who made a late race pass on Travis Rilat for the show position. Travis would hold on for fourth with Johnny Herrera advancing six spots to round out the top-five.

Blake Hahn crossed sixth with Scott Bogucki seventh. The driver of the Sawblade.com No. 28 was lucky to even be in competition as mechanical problems on his rig left him four-hours from the track on Monday morning. Luckily, Davey Heskin was able to help and provided the Brodix Rookie of the Year contender a truck to make it Aberdeen.

Chris Martin crossed eighth. Battling inside the top-five early on, Wayne Johnson would end up ninth with Harli White ending her night tenth.

The Lucas Oil American Sprint Car Series presented by Sawblade.com races next at Mason City Motor Speedway in Mason City, Iowa on Sunday, July 29. The event will include USRA Stock Cars, USRA B-Mods, USRA Hobby Stocks and USRA Tuners. Information on the event can be found at http://www.masoncitymotorspeedway.com or by calling (641) 529-0306.

Heat Races (All Drivers advance to the A-Feature)