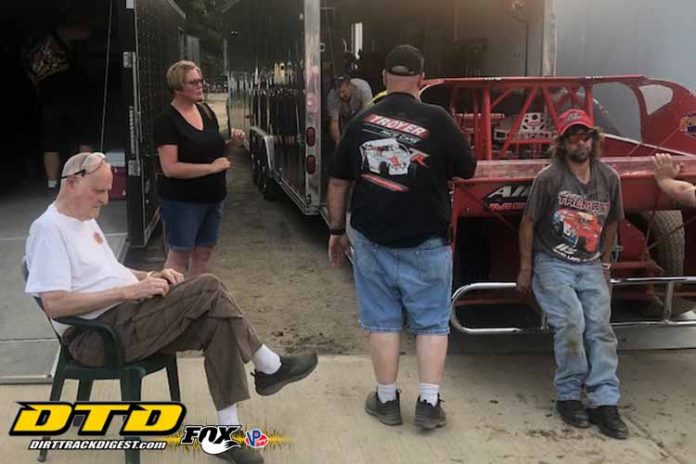 On Friday Ed was back at Albany-Saratoga Speedway and with the addition of the CRSA Sprints all heats were eliminated except for Modifieds and Sprints. During the second Modified heat the evening changed, more than we were ready for.

It’s no secret to anyone who has been reading our columns for the past 20+ years, that Ed has a close connection to the Tremont family so if this sounds bias maybe it is. While watching the two cars battling for the handicap spot, Tremont and Drellos. Tremont went by Drellos on the white flag lap and it was a clean pass (this is important because of what happened next). Drellos No. 111 slammed into the rear of Tremont’s car and spun him in turn three as the checker flew giving the spot to the No. 816 of Rockefeller. Tremont retaliated on track and it continued into the pits. When we got to the Tremont hauler to talk with Kenny he indicated that this was the 12th time he and Drellos had issues and that enough was enough. It was clear that things had come to a head.

Tremont went to the pit tower and told officials, either he leaves or I do. A few minutes later, officials came to Tremont’s hauler and said that Drellos would be put to the rear of the feature. Tremont left the speedway as the crew started to load the car into the hauler. When we spoke with Drellos he referred to contact the lap before he spun Tremont, but we didn’t see it and couldn’t find anyone who did. When we asked Drellos about the previous issues with Tremont he said that he was the only one he had issues with. We did try to get both sides of the story from both parties.

We stayed well after the racing was completed and spoke with many drivers and others who seemed to think that maybe Kenny Tremont, who has never been known to have trouble, may have had enough and at this time was ready to make a stand. He wasn’t alone, Hector Stratton, who had issues with the same driver a few weeks prior, also loaded up and left the track on Friday.


Our conclusion is that no one was right in this incident, Drellos was wrong in spinning Tremont and Tremont was wrong to retaliate. These things happen at all tracks and no matter how you see it, what it boils down to is, the competitors are not the policemen of the sport, it’s the tracks that have to clamp down on issues such as these before it festers into something serious. We’ve covered this before and many we spoke with agreed, the young competitors coming into our sport do not have respect for the veterans they compete against. Yes, we know, they are the future of our sport but let us not forget, the veterans are the ones that got us to where we are today. Matt DeLorenzo won the Modified race on Friday night at Malta, his second win of the season. Matt has been very consistent the past five years at the track. He has four wins and 29 top fives and many times he has been within striking distance of victory lane. Matt Tanner came into Albany Saratoga having a great month so far. He has wins at Utica Rome and Devil’s Bowl and this past week he received a call from Mike VanDeusen offering him a ride in his car because his driver couldn’t make it on Friday. Matt proceeded to rack up another win in the CRSA Sprint feature. The Ward family of Cobleskill makes racing a family affair each week when they travel to the southern tier of New York State to compete in the IMCA divisions at Outlaw Speedway and Thunder Mountain. Billy Ward, Jr. has been racing IMCA for 18 years and on Saturday night at Thunder Mountain he won his first every feature. Ward, Jr. and his son, Will race together each week at Outlaw Speedway on Friday and at Thunder Mountain on Saturday. Each week the Wards travel in their hauler/camper to both tracks coming home sometime Sunday. A week ago Billy, Jr. finished second to his son, Will at Thunder Mountain. Billy, Jr. began his racing career at Fonda when the IMCA’s were running there and he never left the IMCA ranks, traveling to tracks in New York State wherever the class was run. Currently Billy, Jr. is 5th in IMCA points at both Outlaw and Thunder Mountain and 3rd in the state. Will, III currently sits in the top spot in points at both tracks and also in state points. Labor Day weekend Wards will travel to Boone, IA for the IMCA Super Nationals where they will compete in week long racing. Seen in this photo celebrating with Billy, Jr. after his win are Will, III and 5 month old, Lil Will, IV. Keith Tesiero, Jr. had the winning combination when he came to Glen Ridge on Sunday, he came in his Mr. Ding-a-Ling ice cream truck and with such warm weather everyone was happy to see him. In addition to selling ice cream, Tesiero also ran a No. 3T Cruiser in the feature and top off his night with a win. After the win Tesiero passed out what he had remaining in ice pops to the fans and everyone went home happy. Tesiero was just one of the winners in the racing on Sunday others were, Crate Mods, Tim Hartman, Jr., Limited Sportsman, Ryan Heath; Pro Stocks, Luke Horning; Street Stocks, Steve Cosselman; Senior Slingshots, Bryce Cherko; Junior Slingshots, Garrett Poland.