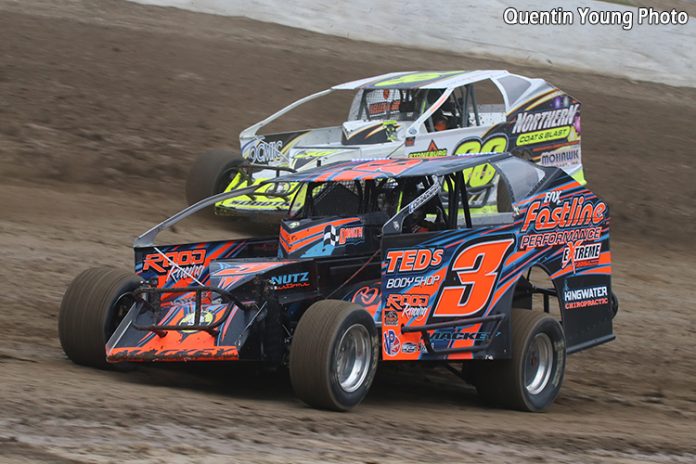 What a whirlwind of a weekend! Friday I was at Brewerton about ready to get out of my car to go sign in and received an emergency call. I had to leave and wasn’t able to return.

Saturday I led a men’s breakfast, did a vow renewal, attended a graduation party, then I made my way to Fulton Speedway where some of the best feature finishes I’ve seen to date unfolded before my eyes.

By now you’ve read who the winners were over the weekend, but I just wanted to comment on the two to four car battles at the front of the fields that had everyone on the edge of their seats. Every feature at Fulton but one came down to the last lap in the front straightaway to determine the winner. To say I was impressed would be highly understated. Even better, I saw very little to no contact between the cars that were battling for the wins in their respective divisions.

Sunday after ministering at my church I had a quick lunch with my family and headed over the hills to Utica Rome Speedway. It took the Sportsman a few laps to get a rhythm going but once they did they put on a good show as did the other divisons.


NYSSCA was in the house for their Safety Night, adding cash bonuses to the first three NYSSCA members to cross the finish line in each divsion. The New York Stock Car Association is a good organization to belong to if you’re a racer, car owner, official or fan. They raise funds all year to help teams in crisis that may have financial burdens associated with them. They provide assistance when medical insurances don’t cover or won’t cover injuries, and as stated before, they support the tracks by adding some additional bonuses to the purse at each member track. I’m a member, and thankfully have never had to test the system, but I know of families and drivers who have, and NYSSCA always comes through for their members in need.

This weekend looks good for a full weekend of racing. I’m going to check out the Syracuse Nationals on Saturday for the first time in many years before heading north to Fulton Speedway. In addition, on the Tuesday the 25th of July the Dirt Motorsports Hall of Fame is holding their 27th annual induction ceremony. The festivities kick off at 5PM at the museum located on Rt 31 just east of the village of Weedsport on the edge of the Weedsport Speedway property.

I know several of the inducties being honored this year and look forward to celebrating their achievements with them.

As I was thinking back on all of the side by side racing I saw over the weekend it reminded me of the message I preached last Sunday about the Holy Spirit. When Jesus Christ began to introduce Him to His disciples Jesus referred to the Holy Spirit as the Helper.

“If you love Me, keep My commandments. And I will pray the Father, and He will give you another Helper, that He may abide with you forever— the Spirit of truth, whom the world cannot receive, because it neither sees Him nor knows Him; but you know Him, for He dwells with you and will be in you. I will not leave you orphans; I will come to you. John 14:15‭-‬18 NKJV”

There is so much information about Holy Spirit in Jesus’ teachings that I taught for an hour and 20 minutes Sunday, and that was just my introduction. This one little passage quotes Jesus’ teaching His disciples to begin to prepare them for His death, burial, resurrection, and ascension.

First, He said “if you love Me keep my commandments.” Searching the Gospels will reveal that Jesus only gave One commandment personally, while fulfilling the whole Law singularly so that our salvation is based on His performance once we receive Him as our Lord and savior.

To “keep” in biblical Greek is to stand watch over, to guard, to protect as a highly valuable thing. Jesus was telling us that if we truly love Him we ought to protect the implanted word of God as we receive it, then He would pray that we receive the Holy Spirit.

When He said “another Helper”, in original biblical language Jesus was saying another Person of the Trinity with the exact same nature and personality as Himself would come. “Helper means Advocate, one who pleads before a judge, one who draws along side of to assist, and one who comes along side together with you against opposition. This is truly an awesome promise because in Christ the Holy Spirit dwells within you, but also is running side by side with you to help you through life.

Jesus also promised two unique and different dispensations of the Holy Spirit in this short passage of scripture. The first is that He, the Holy Spirit, would be with you. That means the presence of God in all of His power and glory will be around you, but the second promise is that He will be in you.

“And I will pray the Father, and He will give you another Helper, that He may abide with you forever—
John 14:16 NKJV”

As you know, to abide means to make one’s permanent home within. This is literally what Jesus is saying about the Holy Spirit to those who believe in Jesus Christ as their savior and confess Him as their Lord.

Jesus’ last promise in this passage is that He would not leave us orphans, but He would come to us. This is proof that Jesus Christ, the Son of God, manifests His presence to us through the One just like Him, the Holy Spirit.

As you can also see in these verses Jesus uses masculine personal pronouns to refer to the Holy Spirit. This clearly indicates that Holy Spirit is a Person. In truth, He is the third Person of the Godhead, equal in power and glory to the Father and Son. There’s so much more depth to Him that one column couldn’t begin to do justice. I just wanted to introduce you to the manifested expression of the Living God that we receive as a gift when we accept God’s grace through faith in the atoning works of Jesus Christ.

I pray you have an awesome week flowing in the blessings God has prepared for you. If you need anything I can be reached at Finish Line Chaplain or Kevin Westcott Ministries on Facebook, and by email at flchaplain@windstream.net. See you at the races!