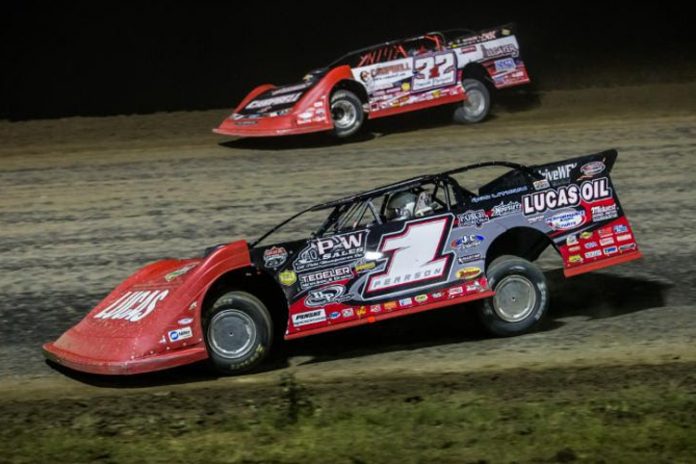 South Dakota veteran Scott Ward grabbed the lead at the start of the 50-lap main event and had the packed grandstands on their feet. Ward led the first seven laps of the race until Bobby Pierce took control. Ward fought back regaining the top spot a lap later. Pierce then moved ahead again on lap ten.

Pierce and Ward ran one-two until Ward left the track and headed to the pit area on lap 31. The first of two cautions appeared on lap 34 for Brandon Sheppard in turn four. On the restart Jonathan Davenport and Pierce swapped the lead several times. Pearson made his late-race charge to take the lead on lap 42.

With just two laps remaining, Pierce slipped off top edge of the track entering turn one. Pearson forged ahead and went on to his fourth victory of the season. Josh Richards edged out Pierce at the finish line for second. Ricky Weiss finished fourth with Don O’Neal completing the top five.

In Lucas Oil Victory Lane, Pearson commented: “First off I want to say hi to all of family and friends back in Jacksonville. What a heck of a race there. We fell back to seventh or eighth there for a while. We had to get to the bottom of the track. When we restarted in third, we got high in turn one and I knew I had to get back down low. Bobby was giving it all he had there up top. I could see him and hear his motor and then he disappeared. It was a good points night for sure.”


Richards got by Pierce on the final lap coming off of turn four. “I hope the fans enjoyed that race. Thanks to everybody who came out tonight. They re-worked and watered the track and that sure helped. I didn’t know after the heats what it would be like if they hadn’t done anything, but thanks to the track crew. It was a great race.”

Pierce was disappointed with his finish, after having such a great run all night until late in the race. “I have raced against Scott [Ward] out in Arizona and I know he is a real good racer. I know the crowd was probably behind him. Once I got around him the car was good up top, and I just stayed there. Then we had the restart and Earl got underneath me and we had a real good race for the lead. I just slipped off the track. I had a stuck throttle from about lap four on. Then the last lap it just about died. I slowed way down. I am not sure, but it was something in the motor, but it ran flawless all night until then.”