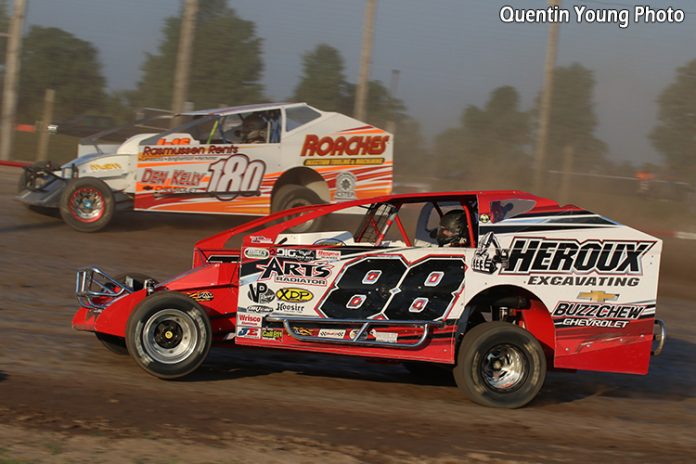 VERNON, NY- This Sunday, July 22, a huge action packed night of short track is racing is planned that will thrills fans of all ages. The $1,000 to win 3rd Annual Mike Martin Memorial for the Broedel Energy Sportsman is on tap along with the King of Dirt Series for the Ted’s Body Shop Pro Stock Series. The DirtTrackDigest.com 358-Modifieds and Rookie Sportsman are also scheduled for a weekly program and finishing off the night will be the King’s Smash’em and Crash’em Demolition Derby. The Marble Hill Inn, a local favorite hangout, is presenting the night’s activities.

For years, Mike Martin was a fixture at local race tracks as he dedicated his life to helping others. Martin was a lifelong racing enthusiast, engine builder, and consultant to many race teams at both Fonda and Utica-Rome Speedway. Martin’s work ethic and attention to detail and wanting “to do the right thing” earned him the respect of everyone in the pit area.

To honor his memory, Carole Martin and family and friends have added money to the top three positions of this Sunday’s Broedel Energy Sportsman feature event plus other bonuses. The victor will now receive $1,000 to win, second will get $550, while third will net $350. The ninth place runner on the ninth lap will be awarded the “Lucky 9” award worth $50. If there are any eligible rookies in the main event, the top finishing rookie will also receive $50. Heat winners will also get $50 from the Martin family (based on four heats). In addition to race bonuses, the Martin family is donating free treats to kids while supplies last.

The competition in the DirtTrackDigest.com 358-Modifieds has been heated so far this season, with four different winners in the four events completed so far. The point standings reflect how tight the action has been with the top five separated by just 18 points. Jeremy Wilder is the current high point driver, just ahead of Marc Johnson, Pat Ward, Billy Dunn, Rocky Warner, Erick Rudolph, Bobby Varin, Bobby Herrington, Jack Lehner, and Billy Whittaker. Matt Sheppard, Ward, Dunn, and Rudolph have all found victory lane once so far. Will one these drivers be the first to double up in 2018 or will someone new find victory lane? That answer will be answered this Sunday.


The King of Dirt Pro Stock Series will invade the Vernon oval this Sunday for their first event of the season. Competition has been stiff so far this season in the only fendered weekly division with Travis Welch being the only multi-time winner with two wins this season. Mike Welch and Pete Stefanski also have wins this season and this trio will be looking for the $600 series win over a strong contingent of invading drivers. Last season, Rob Yetman and Chuck Dumblewski fended off all drivers to take the KoD wins at Utica-Rome Speedway.

After a several year absence, the King’s Smash’em Crash’em Demolition Derby makes a return to Utica-Rome Speedway. After the racing program is complete, the cars will be brought out on to the front stretch to begin the mayhem and carnage. Two classes will be in action with the 4 and 6 cylinder Chain and Bang class paying $1,000 to win with $750 going to the winner of the Compact Junkyard Run class.

Grandstand admission is set at $15 for adults for the Sunday’s big show, with Students, Military, and Senior pricing set at $12. Kids under 16 are admitted for free. Gates will open at 4:30 p.m. with the racing set to begin at 7 p.m.