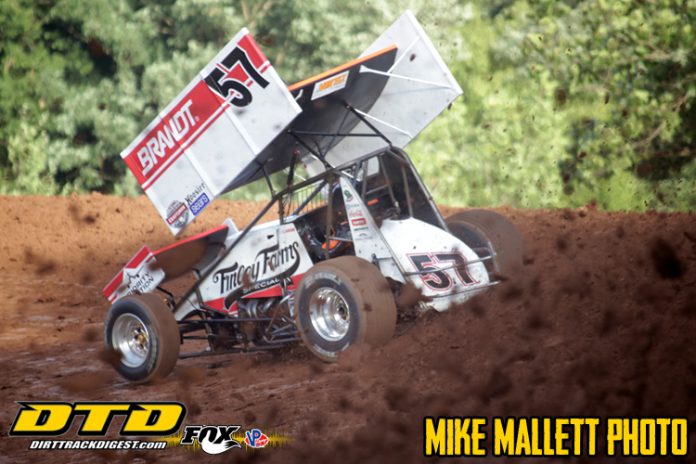 Kyle Larson arrived just in the nick of time on Tuesday night.  He rolled in just before heat in the engines was to commence at the Lernerville Speedway for the annual Don Martin Memorial Silver Cup. The Monster Cup driver had travel delay after travel delay but eventually was able to make it to Lernerville for the start of the program. He arrived early enough to set fast time, win the heat race and eventually win the $25,000 top prize for scoring the win in the 40-lap affair. He was aided by Kasey Kahne in securing a plane which allowed him to show up in time to compete.

“We got here five minutes before engine heats started,” mentioned Larson. “I literally had enough to time to get changed. My helmet was still dirty from Attica (Brad Doty Classic). We got in, fired the car up, swapped tear offs and we were off for hot laps. It’s been a stressful day so it was nice to get a win.”

It was Larson’s second time ever at Lernerville Speedway. The last time the Elk Grove, Calif., driver was in attendance he finished second to Daryn Pittman in the same event back in 2013. That came after the talented driver started at the rear of the field and simply ran out of time to get by Pittman.

“I don’t feel like that one got away because I came from last,” said Larson about his 2013 experience. “I was just fighting the whole time. I needed another lap. I got to his inside after the checkered. It’s cool to come back here.”


On Tuesday night it only nine laps to get to the top spot. Larson drove by some heavy hitters to get the lead including Brad Sweet, Tim Shaffer and eventually Ian Madsen.

“My plan before the race started was to run the top at both ends,” cited Larson. “Kasey (Kahne) kind of a had it going there at the end of the B-Main. I tried that for a few laps and I lost a little ground. I was able to be really fast in three and four. I found that good line right from the start. I was able to nail the bottom on accident in one and two to get by Brad (Sweet). I almost spun out the next lap doing it. From there I tried to be patient around the bottom of one and two to get the couple patches of moisture.”

Larson was aided by the fact that he started outside the second row rather than at the rear. It definitely helped as starting near the front made getting the lead that much easier. As mentioned, the last time at Lernerville he came up short after starting last. He had a lot less cars to pass on Tuesday night.

“It’s always important to start up front in any race, especially a race that only has one caution,” commented Larson.  “I felt like I passed a lot of lappers but when you get to more competitive cars it is harder to do. I like starting from the second row. You get a few laps to figure out where those guys might be struggling and where to attack. We were able to do that and have a good enough car to do that.”

Larson was patient early on. That patience paid off as he worked the right lines of the speedway before leveling off late in the race. His plan initially never really materialized for him. He ended up finding a line he felt good in and he rode that to the finish and the win. He didn’t want any hiccups to cost him a win.

“I felt really good until the last five or so laps,” he said about his line. “I felt like I was making pretty good time through traffic. My line in three and four got kind of slick on me and the entry slowed down and exit became hard to hit so I made little mistakes there. I didn’t know where Brad was running, but I assumed he was running the cushion in three and four because I felt like that was where I needed to be the last five laps. I just didn’t want to make any mistakes up there. I just wanted to be smooth and run a decent pace, but not kill too much time.”

After the event Larson talked about his role as a part-timer. Due to his commitments to NASCAR’s top level he only can compete in a handful of races. That doesn’t mean dirt racing isn’t on his mind all the time as he’s constantly studying and trying to get better behind the wheel of a Sprint Car.

“I feel like I’ve got the best car in the field so that makes my job a little easier,” commented Larson. “You think I’d be rusty. I do get rusty. It takes me the first half of the night the first night out in a Sprint Car to get going, but I spend even more time studying and watching videos now that I’m not in a car every day, well a Sprint Car. I feel like I’m more mentally prepared when I come to race Sprint Cars. I think that’s why I’m able to be on the podium every night.”

Larson’s next scheduled event in a Sprint Car is the Front Row Challenge at the Southern Iowa Speedway coming up on August 6. He’ll also run the Knoxville Nationals preliminary night on August 8. After that, well who knows how well his qualifying night will go.

As he said, “I have yet to talk to Chip (Ganassi) about that.”

For Sprint Car fans, hopefully Wednesday night goes well and they’ll be able to see him again on Saturday of the Knoxville Nationals for another Sprint Car race in 2018.