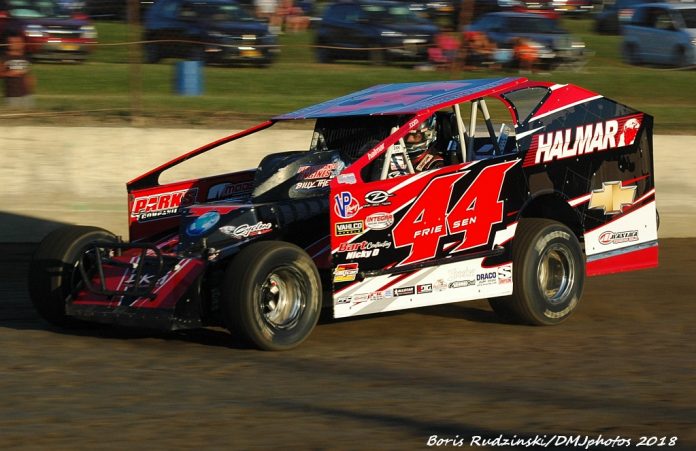 MIDDLETOWN, NY – After a daring pass on no. 19 Tim Fuller, Stewart Friesen in the Halmar Racing no. 44 showed the eager Orange County Fair crowd why he is one of the best short track racers in the country. Friesen, a five-time winner of NAPA Super DIRT Week and NASCAR Camping World Truck driver, was able to stretch out his lead during long green flag runs as well as hold off attempted passes on restarts. While the win was impressive, many will remember the race for a spectacular incident involving Danny Johnson, Bob McGannon, and Rich Scagliotta.

Disaster struck when on lap 28 Danny Johnson, Bob McGannon, and Rich Scagliotta tangled up with each other entering turn one, a very high-speed section of the track. After making contact, Scagliotta spun off into the turn and came to a rest well outside of the racing line. Johnson and McGannon were not so lucky. McGannon’s car hit an inside tire barrier and crushed the front end of his Big-Block Modified. Johnson hit the tires as well and they shot him straight up into the air. When he landed, the right side of the car was clipped by a passing car. All drivers were thankfully able to walk away from the wreck. The 27J of Danny Johnson is likely a total loss.

On Wednesday, July 18 Stewart Friesen raced his dirt truck at Eldora Speedway, along with fellow competitor Max McLaughlin. Both drivers flew back to New York and were able to compete in the Battle on the Midway 100. McLaughlin had mechanical troubles throughout the race but was able to salvage a fifteenth-place finish. Friesen was able to lock it down and take the checkered flag for another Orange County Fair Speedway win.

“What a race team. What a race car. It’s so fun. I get to go racing with my best friends. We have great race cars. DKM is working so hard,” exclaimed Friesen after climbing out of his racing machine. Friesen knew Tim Fuller was fast and consistent. The Halmar Racing pilot had to think strategically about how he was going to get passed the fast no. 19.

“The first time I got a shot at him [Fuller] I just didn’t get close enough to his door. I had to keep my left sides in the rubber. Then I had a pretty good lap there. To be able to get on the topside and makes some moves, this thing was just on point. I knew we had to get rolling at the beginning of this one. We tried to get to the front as quick as we can and just kinda save our stuff. I love racing at this track. It’s strategic and just a lot of fun.”


The Battle on the Midway 100 win comes as a suitable consolation after a heartbreaker at Outlaw Speedway where he broke an axle while leading in the closing laps. When a caution came out on the final lap of the Battle on the Midway 100, Friesen couldn’t believe his eyes. “Then I saw the caution with one to go and I thought man anything can happen, especially with the no. 9s there behind yah. You never know. We had enough. We got it done.”

Runner-up Matt Sheppard in the no. 9s was the next non-qualified driver for Super DIRT Week XLVII after Friesen, so the guaranteed starting position fell to him. “It’s nice to have. It’s our biggest race all year. I look forward to going back there and defending our title from last year.” So far Stewart Friesen, Max McLaughlin, and Matt Sheppard are guaranteed starters at the Billy Whittaker Cars & Trux 200.

Sheppard did not come into the Battle on the Midway with soaring expectations. He’s never won at Orange County Fair Speedway but he felt right at home on the second podium position where he’s finished multiple times over the years. After riding in fourth Sheppard was the beneficiary of a flat tire on the 98H machine of Jimmy Phelps. “It looked like Jimmy must have cut a right year tire down and Fuller was right there. Fuller must have been trapped behind Jimmy and I hate it for Fuller. He had a great night and there’s nothing worse than being caught behind a car with a flat tire. I really feel bad for him but I’m happy with our run tonight. Stewie was obviously in a league his own. He always runs really good here. We’re not usually so good here. We’ll take the second, it’s a good points night for us. We’ll take a few notes and hopefully improve for next time back.”

Erick Rudolph too benefited from Fuller and Phelps’ issues on the last lap. “Yeah it looked like his [Horton] tires might have been going away for him and I was able to slip under him. Long race. I don’t know what happened in that red flag there but it seemed like a forty-minute delay. When we finally got back under green, we were racy. Just pecking our way up. Looked like we were gonna get a top five and then something happened to a couple leaders and we were able to get a podium finish tonight.”

Rudolph was impressed by the stable of Big-Block Modified drivers that compete there weekly. “There was a lot of good local talent that race in the Big-Block division. Some of their experience showed early but they aren’t necessarily used to running 100 laps weekly. So, they were better early but we were able to move up a little bit at the end.”

The next Super DIRTcar Series event takes place at Autodrome Granby in the province of Quebec on Monday the 23rd.