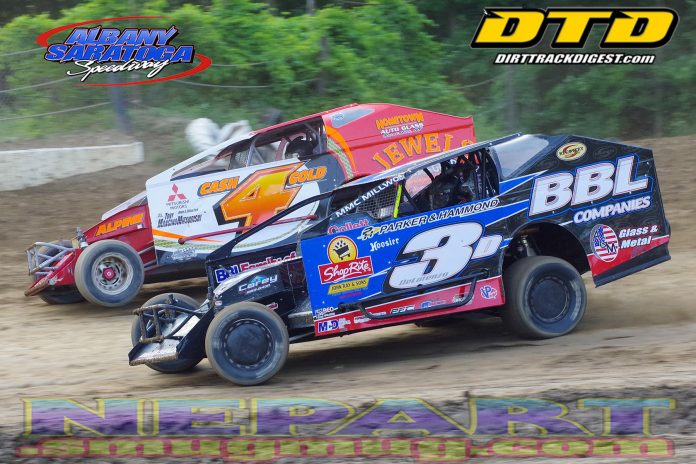 MALTA, NY – Since winning his first modified feature at Albany-Saratoga Speedway in 2006, Matt DeLorenzo has had an up-and-down career at the tricky 4/10ths mile Malta track. There have been years when he sat in victory lane after big races, like the CVRA vs. The World 100-lapper in 2009, when he walked off with $5,000.

And there have been years when he never made it to victory lane, like 2017. But DeLorenzo is enjoying a milestone season in 2018.

This one didn’t come easy. DeLorenzo started 10th, and by the time he took over second place, on lap 10, leader Matt Pupello had opened up a huge lead.

“I wasn’t even sure Pupello was leading,” said DeLorenzo in victory lane after the 35-lap feature. “I thought I saw him take off, but I wasn’t sure. When I looked down the straightaway, I didn’t see anybody. But then I saw him on the high side in traffic, and figured he was leading.”


By lap 24, DeLorenzo had pulled to within three cars lengths of Pupello, who was looking for his first win of the year, and DeLorenzo had Bobby Hackel IV glued to his rear bumper.

DeLorenzo kept reeling Pupello in and made a pass for the lead coming out of the second turn on lap 26, but before the lap was completed, the yellow flag came out for Kris Vernold, who had stopped in the fourth turn, putting Pupello back in the lead.

But on the restart, DeLorenzo and Brett Hearn restarted in the outside lane, and both rocketed past Pupello to take over the top two spots. From there, DeLorenzo easily pulled away from Hearn to get the win.

“My car was real good on top,” said DeLorenzo, who has looked impressive since making an adjustment on his Bicknell chassis two weeks ago. ” I just thought it was better to keep up my momentum on top. It’s easier to drive on top and I didn’t want to work the brakes too much, so I took the easy route.”

Following Hearn across the finish line were Pupello, Marc Johnson and Bodie Bellinger, who had his first top-five finish of the season.

Connor Cleveland drove to his third won of the year in the sportsman feature. Cleveland, who started 11th, got the lead coming out of the fourth turn on lap 11 and pulled away from Chris Johnson on his way to the checkered flag. Derek Bornt, who started fourth, crossed the finish line third.

The DIRT Pro-Stock Series brought the top pro stocks in the Northeast and Canada to Albany-Saratoga, with Chuck Dumblewski of Amsterdam getting the victory in a wild finish. Late in the 35-lap feature, Dumblewski was tip-toeing through traffic, leaving Ivan Joslin and Rob Yetman to battle for second and looking forward to what looked like a comfortable margin of vlctory.

But on the final lap, Dumblewski trapped himself behind a single-file line of lapped cars in the bottom groove and Joslin and Yetman both pounced. But somehow, Dumblewski managed to wiggle out of his predicament just in time, and maintained the lead while bouncing off Joslin. That allowed Yetman to nip Joslin for second.

“I thought maybe I had a good enough lead to be safe, but then I saw the 49 [Joslin] and had to lean on him,” said Dumblewski . “The lapped cars really held me up.”

Steve Ryan put his car on literal cruise control to chalk up his third win of the year in the four-cylinder feature. Brandon Ely was the first single-cam car across the finish line.