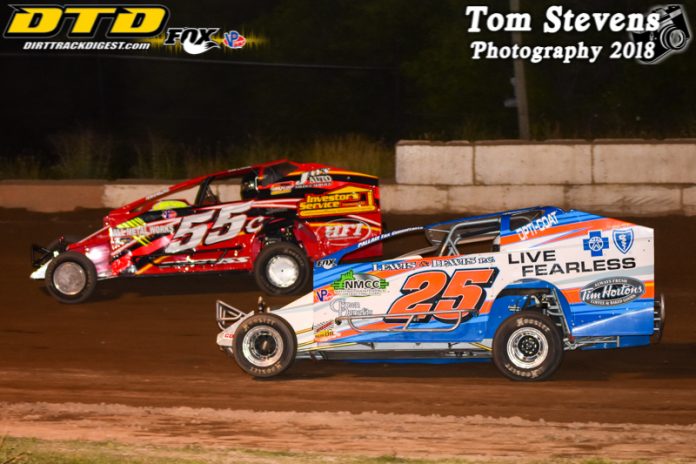 Qualifying heat race winners Jesse Cotriss and Matt Farnham were on the front row for the Krown Undercoating Modifieds feature event with Cotriss in the lead with Scott Kerwin moving into second place at the end of the opening lap. Erick Rudolph would pass last weeks’ winner Allan Wills to enter the top five on lap four. Jeff McGinnis would work his way by Kerwin to move into second place, as Cotriss would lead by three seconds. Greg Martin would spin in turn four to bring out the caution on lap eight, erasing the 3.1-second lead that Cotriss had on the field. On the restart, Cotriss would continue to lead as Erick Rudolph would challenge Jeff McGinnis for second, with Rudolph taking second away on lap 10. “Mr. Small Block” Pete Bicknell would enter the top five for the first time after passing Scott Kerwin on lap 11 and would go after fourth place running Matt Farnham. Bicknell would continue to trek towards the front of the field after passing Farnham to take fourth place away on lap 14. Pete Bicknell broke the left front after hitting the inside implement tire to bring out the caution with nine laps remaining. The lap 21 restart would see Cotriss and Rudolph battle for the lead with Cotriss keeping the lead. Rudolph would look several times to look underneath Cotriss in the late going. Cotriss would hold off Rudolph to score his first win of the season.

Dustin Gorhan and qualifying heat race winner Justin McKay shared the front row for the 25-lap feature for the Investors Service Sportsman with McKay jumping into the lead as Chris Burek moved quickly into second place at the end of lap one. Cameron Tuttle would pass polesitter Gorhan for third as James Henry, Dave DiPietro, and points leader Brett Senek all moved into the top six. DiPietro would slow down the main straightaway to bring out the races’ first caution on lap six. Burek would take the lead away from McKay off the lap six restart as James Henry passed Tuttle to move into third place. Garrison Krentz spun, in turn, two with Noah Walker making contact and rolling on his roof to bring out the red flag on lap seven. All drivers were okay and climbed out of their cars under their own power. The restart would see Burek back in the lead and would pull away from the rest of the field. Brett Senek would pass Tuttle for fourth place at the halfway mark, as Burek continued to lead McKay and Henry. Burek and Senek would launch into the top two after a lap 15 restart. James Henry would pass McKay to move into third with five laps remaining, as Burek would pull away from Senek. Cameron Tuttle and Kevin Wills brought out the caution with three laps remaining. The late race restart would see Burek hold off Henry to get the win.

Randy Zimmerman and Mike Kramarz were on the front row in the 20-lap feature for the KiPo Chevrolet Street Stocks with Kramarz leading the opening lap. Kramarz would continue to lead as Ken Camidge moved into second with Zimmerman, Bryce Richardson and Chris Dziomba racing inside the top five. Cory Sawyer would race in sixth and would move into the top five after passing Richardson on lap six. Mike Kramarz’s roof panel fell off the car to bring out the caution on lap six. The restart would see Camidge and Kramarz battling for the lead with Dziomba and Sawyer racing inside the top four. Camidge would complete the pass on lap nine to take the lead. After several laps of battling for third place, “The Huckster” Cory Sawyer would move into third after passing Dziomba on lap 13 and would look to get around Kramarz for second. Sawyer would complete the pass just one lap later to move into second. Camidge would pull into the pits while leading, giving the lead to Sawyer. Sawyer would hold off Kramarz to get his fourth win in the last five weeks of competition.

Brandon Potter and Cole Susice brought the Gippsters Collision 4 Bangers to the green flag for their 15-lap feature event with Susice in the lead at the end of lap one. Current divisional points leader Matt Hornquist took the lead away from Susice on lap two, as “Mr. Peanut” Ryan Plante raced from third place. Hornquist would pull away from Susice and Plante and with five laps remaining, would suffer a flat right rear tire. Susice would re-inherit the lead. Susice would hold off Plante to score his second win of the season.


Qualifying heat race winner David Fingerlow and Orval Harris were on the front row for the 15-lap feature for the Stevenson’s Hardware Novice Sportsman with Fingerlow in the lead with Bubby Pawlak racing in second. Pawlak would take the lead after a miscue by Fingerlow on lap four. Cody Wolfe would take second away from Fingerlow and would challenge the leader. Pawlak and Wolfe would pull away from the field with Pawlak pulling away from Wolfe to score his first win of the season.

NEWS AND NOTES: American Legion Post 873 from Newfane presented the nation’s colors as Ransomville Speedway honored all veterans in attendance. The Bailey Brothers Kids Club led the crowd in the pledge of allegiance and local artist Pete Robinson performed the national anthems. After Cory Sawyer’s win last Friday night, the motor was sent to the dyno and tech officials deemed that the motor in Sawyer’s 187 Street Stock was legal and Sawyer is credited with the win in the John Susice Memorial.

Next Friday night, Busch Beer and Stirling Lubricants presents the #BigROutlawShootout featuring the World of Outlaws Craftsman Sprint Cars. The Investors Service Sportsman will also be on the racing card. Pit gates will open at 2 pm. The Will-Call Ticket Window will also open at 2 pm with grandstands opening at 4 pm and hot laps beginning at 6:30 pm, with racing getting underway at 7:15 pm. A limited number of presale tickets are still available by calling 1-844-DIRT-TIX. General admission tickets will also be available the day of the race.