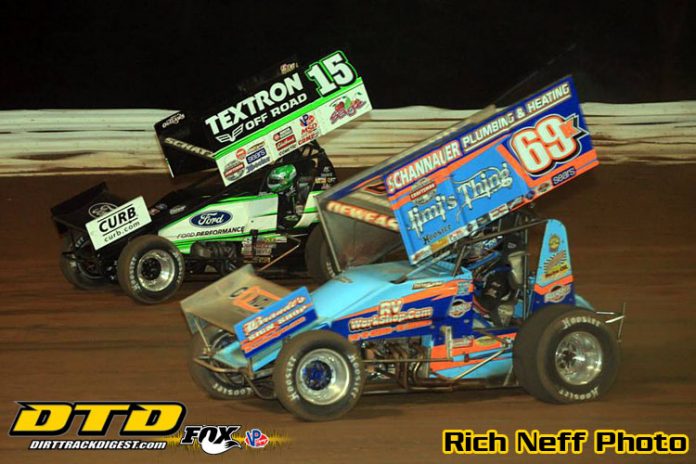 Lucas Wolfe won the Sears Craftsman Dash, earning the pole for the 25-Lap Feature, but it was fellow front row starter, Donny Schatz that got the jump on the initial start to lead the opening lap.

Ian Madsen brought out the first caution of the evening on Lap 3. Lance Dewease, who started fourth, used the restart to move into second by Wolfe. Greg Hodnett moved by Wolfe into third a lap later.

Dewease closed in on Schatz as the duo established themselves as the class of the field. Schatz negotiated lapped traffic with ease, before a caution for Sheldon Haudenschild on Lap 16 bunched the field together.


Once again, Schatz kept Dewease at bay on the restart. One lap later, Trey Starks was backwards, setting up the final restart with seven laps remaining.

This time, Dewease stayed right Schatz. Dewease followed Schatz on the top for a lap before making his move with a slide job in turn one to lead down the backstretch to the delight of the large Williams Grove Speedway crowd.

Dewease extended the lead and went on to win by 1.201 seconds for his 14th career Outlaw win and to become the winningest driver in Williams Grove history.

“It just feels great to be in Victory Lane and to beat Donny Schatz, he’s one of the best racers to ever drive these cars and he races you as clean as anybody. I hope my pass on him was as clean as he races all of us,” Dewease said in Victory Lane, deflecting the attention away from his record-breaking win at the facility.

Dewease acknowledged his great car owners and teams that have helped him to get to this point in his career, including his current team which is assembled with 3 Hall of Famers – himself, Car Owner Don Kreitz, Jr. and Crew Chief Davey Brown.

“Every start I got a little better off of four and I finally got a big run at him,” Dewease said of his winning pass on Schatz. “For all of you fans that come out and support us every week, this is for you,” Dewease added to a chorus of “Posse” chants from the local faithful.

“If you come around here and race with Lance for the win, you’re doing something right. No excuses, he beat us,” Schatz said to track announcer Bruce Ellis. “You do the best you can and tonight was second. It was still a good night for us.”

Brian Montieth finished third and was in good spirits, “We got going a little better at the end, my guys gave me a great car. Hats off to them, we wrecked a car last week and had to build a new one and it paid off.”

Wolfe finished sixth with Outlaw Regulars 15th-starting David Gravel, Brad Sweet, Daryn Pittman and Shane Stewart completing the top ten. The World of Outlaws Craftsman Sprint Car Series returns to Williams Grove Speedway tomorrow night for the conclusion of the Summer Nationals, which will pay $20,000 to the winner.If you can’t make it to the track, be sure to watch all the action LIVE on DIRTVision.com!