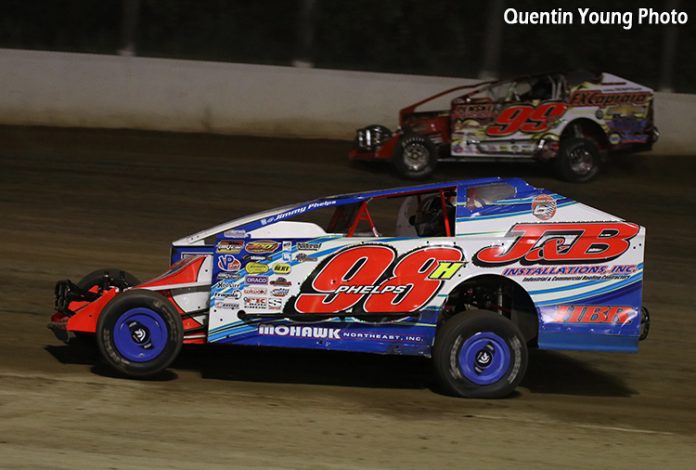 Chris Hile got the jump on wife Katelyn at the start of the 35-lap Modified main, darting out to a big lead. Tyler Trump and Larry Wight slid around Katelyn Hile for second and third, starting a see-saw battle that lasted much of the event. Wight stuck his nose into second for the first time on lap eight, but Trump fought back. It wasn’t until halfway that Trump cleared Wight for second, but by this time, Hile’s lead had grown to an entire straightaway.

On lap 23, Wight finally clawed back around Trump, then setting sail after Hile for the top spot. As Wight etched into Hile’s advantage, Trump fell into the clutches of Tim Sears Jr., Jimmy Phelps, and more for third. However, that battle was well behind the top two.

With five laps left, Wight had chopped Hile’s lead to less than half of what it was, gaining every lap. As Wight chased Hile, Trump’s solid run came to an end, as the Modified rookie spun to a halt in turn three. With four laps to go, it was Hile leading Wight, Sears Jr., and Phelps.


On the restart, Sears briefly shot to second, making hard contact with Wight in the process. Within seconds, Wight was back in second, but Hile wasn’t very far ahead and Phelps wasn’t very far behind. As the four leaders charged out of turn two, Tim Sears got slightly out of shape, and Phelps made minor contact with Sears’ rear bumper exiting the turn. Despite the contact between Phelps and Sears being much softer than the contact between Wight and Sears just moments prior, Sears spun to the bottom of the track. The caution flew, and the leaders lined up for another

Hile got a good restart, putting a couple of car-lengths between himself and Wight. With the top two running up high, Phelps went down low. Coming to the white flag, Phelps drove under Wight for second, now only feet behind Hile.

Hile went to the top of turn one, with Phelps returning to the bottom. Down the backstretch, the two were even, running door to door entering turn three. To Hile’s dismay, turns three and four were Phelps’ strongpoint, as Jimmy Phelps got the bite he needed to complete the pass and steal the win. Hile finished second, with Larry Wight, Max McLaughlin, and Chad Phelps completing the top five.

“For starters, I’m not exactly sure what happened with the 83 (Sears),” Phelps said. “I got into him, barely came together, but I was on the brakes as hard as I could. Other than that, the car was really good. I felt like in traffic I could never get to the bottom or top, so we had to drive through the middle, but the more the tires heated up, the better it stuck in the middle so we kept with it. I definitely felt like we needed to be on the bottom of three and four, and it payed off when we were there.”

Justin Williams had an eventful Mod-Lite main, as early in the event he was in the pits, out of his car, and changing his own tire. It didn’t phase the points leader, as he snuck under Mike Mullen with three laps left to grab another win.

Michael Stanton ran away and hid in the early stages of the first Sportsman main, but Nick Krause’s hot streak wasn’t cooling off anytime soon. The pair battled through traffic, with Krause getting by Stanton with five laps left for the victory. Stephen Denton snatched the win in the second Sportsman race, leading much of the distance. It wasn’t easy, as Will Shields spent the final ten laps all over the rear bumper of Denton. Quinn Wallis capped off the night with a dominating 4-cylinder win.