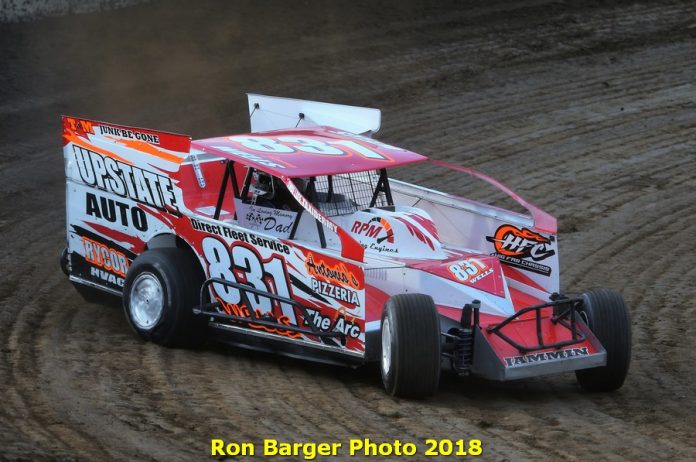 ACCORD, NY – Accord Speedway Promoters Gary and Donna Palmer completed their twelfth Friday night show of the season last evening and what a show it was. The eight division event found two new winners emerging during the evening while some familiar names were again at the top of their game to come home with a victory in their respective divisions. The joy of making a trip to the WRWD Radio Victory Lane is a highlight for each driver who has done his or her homework to enjoy the sweet celebration that follows. The weather fully cooperated and the enthusiastic crowd came out to the speedway to enjoy a superb evening of speed. The evening was sponsored by the good folks at Williams Lumber who have eight locations in the greater Hudson Valley of New York and one location in Connecticut. They also brought along one of their lumber wagons for pacing the field and an abundant array of shirts, hats and carry-all bags for the fans. The Williams Lumber website is: www.williamslumber.com

When the final tallies were recorded, “Jammin Jimmy” Wells mounted a “spree to get three” as he overcame a huge lead by New Jersey star Steve Davis to go on and capture his third win of the season at Accord in the Insinger Fuel Modifieds. Veteran Accord Speedway campaigner Mike Senecal hung tough all night long and he too put together a late charge to capture the Arkel Motors Sportsman main event. Livy Johnson was on point and scored her second win of the season in the Upstate Auto Pure Stock feature attraction. “The Travelin Man” Mick D’Agostino continued his winning ways as he held off a tough Jeremy Quick to score his sixth win of the season in the WRWD Radio NEWS Sprint Car feature. Travis Green made a late charge to the front successful as he scored his second win of the season in the WRWD Radio Rookie Sportsman feature. The Emmanuel’s Marketplace Fireball 4-Cylinder feature was captured by Richard Smith as he borrowed a car for the evening to grab up his third win of the season. The Northeast Vintage Modified feature was captured by Mike Houghtaling for his second Accord win of the season. Ashton DeWitt captured what was determined to be his first ever win at the speedway in a special event headlining the Junior Slingshot division..

Nick Johnson and Steve Davis brought the field down for the start of the thirty lap Insinger Fuels 30-lap headliner for the Modifieds. Davis was a rocket off of the top of the speedway and opened up a huge lead early with some 13.5 second lap times as his Premio Sausage/Bubba Burger hot rod was extremely quick from the upper channel of the speedway. Davis continued to lead in only his third appearance of the season and by the halfway point opened up a straightaway lead on the field. Past the halfway point, Davis began to encounter slower traffic and his momentum hit a snag as he drove lower on the speedway and found the sledding tougher to try to move forward at his earlier pace. Rich Ricci Jr and Jimmy Wells gobbled up the real estate quickly and moved in behind Davis but not before Wells slipped by Ricci for the runner-up slot.

By the time Davis regained top speed on his race car, Wells was knocking on the door and the pair raced hard with Wells making the winning pass off of turn two on lap-24. Wells would lead the rest of the way to capture his third win of the season in his Upstate Auto wagon. Davis would finish second in a very strong and impressive run at Accord. Rich Ricci Jr was third while Danny Creeden hustled to fourth and Jerry Higbie charging to fifth after starting eleventh. Heading up the second five was Mike Ricci with Anthony Perrego, Andy Bachetti, Joe Judge and Danny Tyler completing the top ten.


The Arkel Motors Sportsman event pole sitter Kevin Stevens sprinting into the lead at the drop of the green flag as he bested Mike Senecal for the early lead. Stevens, who has been a part-time campaigner in 2018, wasted no time as he revved up the jets on his Frank Stevens Roofing racer to open up a six car advantage on the field. Stevens was in a hurry but Senecal stayed within striking distance throughout the first half of the feature. Stevens began losing ground as the leader as Senecal, Matt Shultz and Tyler Johnston kept pace and closed in on the leader. Senecal began to stick the nose of his racer under Stevens and on lap-17 took over the lead. Senecal led but Shultz got around Stevens as did Tyler Johnston but Kyle Rohner, who recovered from a first lap tangle, was now moving forward and he would slip past Johnston and then past Stevens. Senecal would not be denied on this night as he captured the win with Shultz doing great work in second and Rohner driving to third place. Kevin Stevens and Tyler Johnston completed the top five. The second five found Leo Fotopoulos, Danny Morgiewicz, Harry Baldwin, Dave Demorest and Nick Plumstead completing the top ten.

Joe Coppola would lead from the first lap in the WRWD Rookie Sportsman headliner. Sixth starting Travis Green worked his way forward and began to put some pressure on Coppola past the halfway point. Green found the baseline to his liking and mounted a bid from there to pull even and then take over the lead from Coppola on lap-13. Green led the final laps to claim his second win of the season. Coppola earned runner-up honors while Brian Durbin, Michael Corbin, Travis Cogswell, Kyle Swart, Erin Paulison and Billy Fiske followed.

In the Upstate Auto Pure Stock event, Ray Tarantino led the first six laps. A scramble in turn three found Tarantino suffering heavy damage to his race car. On the restart, Livy Johnson took command and and led the remaining laps to claim her second win of the season. Travis Brockner would earn runner-up honors with Bob Sleight third, Emerson Cargain fourth and Kyle Welsch in the top five.

Jordan Lawrence would jump into the lead at the start in the WRWD Radio NEWS Sprint feature and would lead the first two laps before yielding to Mick D’Agostino. D’Agostino would soon find Jeremy Quick making advances for the lead. The pair raced clean and hard and Quick pulled even a few times only yo find D’Agostino rise to the occasion each time. D’Agsotino would raced to his sixth win of the season with Quick a very close second. Corey Wood was third while Andrew Davis, Jordan Lawrence, Don Smith Jr, Mike Traver, Mark Connolly and Dan Malley completed the field.

In the Fireballers feature, Willie DeGraw grabbed the lead at the start and would lead the first five laps before Richard Smith found room out by the boiler plate to slip past him. Once in front the show belonged to Smith as he led the rest of the way for the win, his third of the season. Ryan Heady ran a strong event to record runner-up honors. DeGraw was third with Jerry Kingeter and George Barringer completing the top five. Brandon Conklin, Anthony Tarantino, Ed King, Ken Barringer and Dave Bendell filled out the top ten.

In the Northeast Vintage Modifieds, Mike Houghtaling led every lap to claim his second win of the season at Accord. Mike Brown was second with Bob Harless, Ray See Sr and Jimmy Halpin rounding out the top five.

The Junior Slingshot feature found Ashton DeWitt scoring his first ever win at Accord while Brock Pinkerous, Garrett Poland and Chase Zimmer followed.

New additions to the speedway included Kory Fleming in the Modifieds. Kory has moved his racing around this year to different speedways and said he had not been to Accord in ten years. A flat tire on the third lap of the feature proved to be an early dismissal for him. Kyle VanDuser was in a new mount and Mike Ricci took over the car Rich Ricci III was driving of late. Don Smith Jr was back in the sprint car that had been handled of late by Gary Huston. Kyle Welsch made a surprise appearance for the Pure Stocks. Don Smith III was a new addition to the Sportsman ranks. The four cylinder division had Robert Phillips making his first start.

The track was in excellent condition as noted by some quick times in the Modified feature event.

Many thanks to Susan Coddington from Williams Lumber for her assistance during the evening.

Chase Zimmer made his first Accord start in the Junior Slingshots. Chase is the son of former Pro Stock Champion at Accord Pat Zimmer.

Next Friday, July 27th brings the fine folks from Mid Hudson Concrete to the Accord Speedway with all divisions in action and a special tribute to Joe Giachinta and Camera and Autograph Night on the speedway.

August 10th is the Second Annual Accord Speedway Reunion event sponsored by KenCo Outfitters. More than 60 drivers are expected for this meeting of old friend and competitors