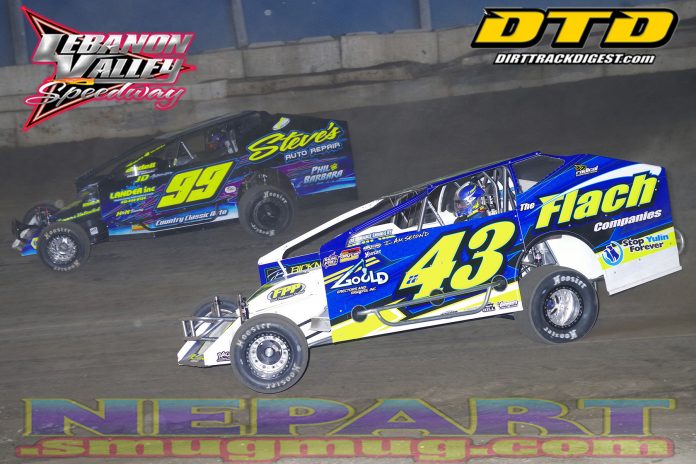 WEST LEBANON, NY – Saturday night’s Modified feature looked like it was going to be a victory for Brett Hearn. Then, a wrench was thrown into the proceedings.

Steve Hough started from the pole and quickly jumped out to the lead. Further back, Kolby Schroder spun in turn 2 after contact from Eddie Marshall to bring out a quick yellow. Dave McFeeters was also collected in the incident, retiring from the race as a result.

Brian Berger, who started third, passed John Ruchel almost immediately and got himself right up to Hough’s bumper. A back-and-forth battle for the lead between the two drivers began that lasted for nearly half of the race. Berger was able to poke his nose in front of Hough, but never could clear the No. 34.

Josh Marcus spun out in turn 1 to bring out the second caution on lap 8. From that point on, it was essentially a four-car duel at the front. Hough and Berger were joined by Hearn and Keith Flach. The battle for the lead effectively locked up Hearn and Flach so that they couldn’t do anything. Eventually, Berger slipped and fell into Flach’s clutches on lap 17. That gave Hearn the chance to sweep by both drivers to take second.

A lap later, Hearn took the lead away from Hough and looked to get his third win of the year. Then, the engine went up in smoke, bringing a number of the fans in attendance to their feet. Hearn would finish 16th and wonder what could have been.


The expiration gave Flach the lead with eight laps to go. From there, Flach was able to maintain his advantage and take his first win of the year. Despite the win, he knew he didn’t have the best car.

“Our car was definitely good [tonight],” Flach said in the pits. “We’ve been fairly consistent and decent enough to be in the mix. I think we were good enough to be a second-place car. I don’t think we had as much as Brett [Hearn] did…but sometimes it’s better to be lucky than good.”

The Small Block Modified feature was relatively calm at first but picked up at the end. Hough started from the pole and opened a small gap over Timothy Davis. With momentum being the key, it was relatively hard to make passes.

Hough, Timothy Davis and Frank Harper pulled away from the rest of the field and looked to settle things among themselves. Then, Brett Haas had a transmission shaft failure and stopped exiting turn 2 to bring out a yellow with three laps to go.

On the restart, Harper was able to get past Timothy Davis for second. Shortly afterwards, Kim LaVoy spun in turn 3 to bring out another yellow. A scoring conflict involving Ricky Davis then resulted in a significant delay.

After a delay, Hough was able to hold off the pack in a one-lap shootout to claim his first win of 2018. Harper was second, followed by Andy Bachetti, Timothy Davis and J.R. Heffner.

The DIRTcar Pro Stock Tour made their annual visit to Lebanon Valley on Saturday night. As a result, only Valley appearance points were on the line. That said, it was a very competitive race.

Albany-Saratoga regular Dan Older started on pole and led early over Nick Arnold. The side-by-side action was quite fierce. A slightly larger than normal field made it even more brisk.

The race was slowed early on due to incidents involving Guy Viens and C.D. Beauchamp that kept the pack bunched. It was on the restart from the Beauchamp incident that things got really interesting. Older and Rick Duzlak were battling for the lead when contact was made in turn 4. A mad scramble resulted. Eventually, Frank Twing and Steven LaRochelle spun to bring out a yellow, but a number of others got damaged.

Duzlak continued to work on Older and was eventually able to get past on lap 14. At that point, a clearly defined lead pack formed consisting Duzlak, Jay and Jason Casey, Jason Meltz and Rob Yetman. The pack stayed intact until Meltz hit the wall in turn 3 just after Twing spun to bring out a yellow. Meltz’s night was over while Yetman had to pit for a flat tire. He would finish 12th.

The race came down to Duzlak and both of the Caseys. Jason Casey had cleared Duzlak on lap 22, but a crash on the backstretch involving LaRochelle, Joe LaFlamme and Marc Lalonde nullified the pass. Duzlak held back the Canaan charge to take his third win of the season.

Jason Casey was second, followed by his father Jay. Jon Routhier was fourth, while Rich Crane was fifth.