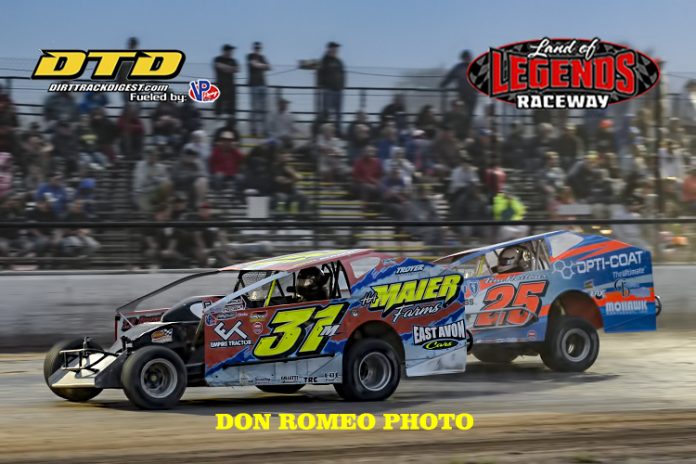 The Sportsman feature is scheduled to be completed Aug. 4, the same night LOLR Wall of Fame induction ceremonies for Bob McCreadie will now be conducted to honor the all-time Canandaigua Speedway favorite. A.J. Lloyd will return to the point alongside front row partner Kyle Kiehn with 19 laps remaining in the 25-lap feature go and 26 cars filling the Sportsman grid.

With light sprinkles first falling during heat race qualifiers, the forecast of rain ranging anytime from 6pm until 1am finally materialized at 9:20 when Sportsman cars circled the track under caution following a minor mishap. The sudden cloudburst forced track officials to postpone the remainder until the first Saturday of August as no oval track racing is slated for July 28 due to the Ontario County Fair.


Charging to the front of the 23-car field from his 11th-place start, Rudolph overtook James Sweeting on lap 21 and maneuvered through traffic to win by three-quarters of a straightaway in the caution-free Big-Block affair.

“The chance of rain all night didn’t really change our strategy, still have to make the passes whenever you can out here,” remarked Rudolph, 26, after parking his #25 Opti-Coat-Blue Cross/Blue Shield-Mohawk Northeast/Bicknell entry in the LOLR winner”s circle for the fourth time; his first two wins came in 2014 for car owner Mike Payne. “Fortunately we got to the front before most of the other guys did.”

The 35-lap Big-Block feature originally postponed from last weekend will not be made up, and in lieu of the cancellation LOLR Promoter Paul Cole raised the purse for Saturday’s race. Second-generation standout Rudolph received a healthy $2,500 payoff and runner-up Billy Dunn earned $1,500, with no driver heading home with less than $300 in his pocket.

Taking advantage of the stellar track prep work performed during the week by Lee Depew and Mike Hamm, Gil Tegg Jr. bolted from third to first on the opening circuit and set a fast pace until his no. 22G A&G Food Service-First POS-All Star Pizza/Bicknell ride encountered heavy traffic 14 laps in. Fifth starting Sweeting chased down Tegg and ducked underneath as the lead duo diced among lapped cars heading down the frontstretch on lap 19.

Dunn and Rudolph were the quickest through the field of the current point leaders, with both sitting solidly in the top-five at the halfway mark. Rudolph moved past Dunn in traffic when Sweeting grabbed the top spot and two laps later made a three-wide pass for the lead exiting turn two. Dunn took over second on lap 22 while rising star Max McLaughlin pulled into third on lap 24.

During the final 10 laps, Matt Sheppard and Jimmy Phelps closed in on the front-five while Rudolph continued to distance himself from the competition. Taking advantage of Jimmy Maier in traffic, Phelps filled the low lane coming out of turn four to grab fourth from Sheppard just two laps from the finish.

“We knew what the track was like early so we made the adjustments that turned out to be good ones,” said Rudolph, 26, who used a heat race win and feature victory to turn an 11-point deficit into a three-point advantage, 691-688, over defending track champion Sheppard with a handful of shows remaining. Still winless Dunn (637) and Phelps (634) rank next on the points chart.

“After struggling quite a bit last year, we’re really happy with how the car is working this season. We’ve made a lot of progress, but we know there’s still some room for even more improvment,” added Rudolph, who tows in weekly with father Charlie from Ransomville to take on DIRT’s best, just like his dad, the 1986 Mr. DIRT titlist.

With $1,000 awaiting the winner in the extended 25-lap CRSA Sprint Car Series A-Main rain-delayed from June 23, fifth starting Ruggles made quick work of 305 tour stars Jeff Trombley and Thomas Radivoy. Yet despite the final outcome, the hometown hero from Hopewell still needed nearly every turn of every lap down the stretch to salvage a narrow victory under flagman Scott Hixson’s checkers.

“Seen (Radivoy) on the outside, and before that last caution I saw Alysha (Bay, daughter) was in second so I knew she’s definitely not running the outside,” figured Ruggles, whose first win of the night came in the 100th 305 feature staged at LOLR since the division debuted in 2012. “But I still didn’t think the outside was any place to be.”

“With her on the bottom he must’ve figured we had it all clogged up so he tried something on the top and found it to work for him. And what any racer does, I tried to take his lane away and make my car as wide as possible,” Ruggles noted.

Ruggles maintained a seemingly comfortable lead until his #48jr. Willmes Enterprises-VanBortel Trucking winged machine hit traffic on lap 14. In his rear-view mirror much of the way, Bay first swapped third with Trombley at the midway mark before trading off the number two spot with Radivoy over the final third.

Radivoy took over second for good on a lap 21 restart yet a gallant effort on the high side the final four laps fell three car-lengths shy at the line. Bay, who won the last CRSA main on June 22, settled for third ahead of tour points leader Trombley, who won at Canandaigua in the Memorial Day CRSA special, and Billy VanInwegen.

“To be honest, my car was running like garbage all night long,” added Ruggles, who finished 5th out of six cars in the evening’s first sprint race — a dash-for-cash. “We were terrible in the dash, car wouldn’t work on the bottom, thought we would be in real trouble tonight. We didn’t have any time to get under the hood, tried making some motor changes duirng the week but I think we went backwards instead.”

The second 305 sprint race on the docket Saturday began with returning LOLR regular David Ferguson taking the green from the pole. Ruggles started fourth in the 20-lap nightcap and this time needed only four laps to dispose of Ferguson, who returned after a three-week absence following his Canandaigua crash on June 22.

A pair of early yellow flags for Tim Smith, who looped his mount in turn three on lap two, and Tyler Jashembowski, who limped down the front chute on lap four, were all that could slow Ruggles in round four of the CRSA Sprint Car Series. Canandaigua regulars dominated in their return with Jerry Sehn Jr. (3rd) the only traveler to crack the Top-5, finishing ahead of Brandyn Griffin and Bay in the 10-minute A-Main.

“Pretty good night for us as between Alysha and myself we took home over $2 grand,” smiled division points leader Ruggles, 52, following his all-time track-high 31st career 305 triumph, more than double Ferguson’s total of 15. “And so far its been another good season we’re hoping to continue in the weeks ahead.”

The fifth and final appearance of the season by the touring CRSA sprinters in Canandaigua is Sat., Aug. 18.

Since reaching the winner’s circle on opening day, DePuy has continued to bolster his own success rate, scoring seven victories in 12 Big Dog Country Street Stock events. His latest triumph was in typical fairgrounds fashion as the Macedon driver dueled nose-to-tail much of the 15-lap race with runner-up Minutol before registering his 36th career win at the high-speed half-miler.

DePuy stormed from third to first on lap one while Minutolo was shuffled back to fifth as his outside lane starting assignment was the biggest difference. Despite a pair of spin-outs in the early going, Minutolo bided his time, taking third on lap two before moving in to shadow DePuy after a lap five restart.

The fifth and final caution period following a turn four tangle between front-five runners Jason Doty and Nick Dandino gave Minutolo a final chance, yet the reigning track points king was up to the challenge as DePuy held snug to the inside groove leaving Minutolo no room to slip under.

Veteran Blane Smith, aboard the no. 55 entry normally steered by his son Parker, placed third followed by Jason Quigley and full-fender pioneer Steve Pesarek (65 wins), who at age 72 returned to the weekend wars in wine buckled into Bill Twist’s familiar orange #30 ride.

While no oval track racing is scheduled at LOLR on July 28, a Tuff -Truck-Tug-O-Warz event runs Thursday (7/26), an Empire State Pullers/Lucas Oil Pro Pulling League Tractor Pull is slated for Friday (7/27) and a Demolition Derby runs Saturday followed by fireworks at the fairgrounds.