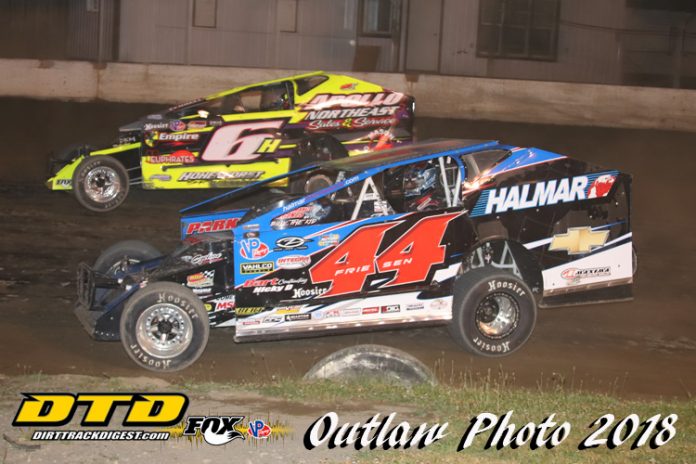 FONDA, NY – It was another special Saturday evening at the “Track of Champions” Fonda Speedway for both children and adults as they got to meet their favorite drivers and see their cars up close and personal on the front stretch of the historic half mile race track during a Meet & Greet!

Once that was completed it was another special night for the DKM “Cyclone” drivers as Stewart Friesen (modified) and Adam McAuliffe (sportsman) visited victory lane in their “Cyclone’s”.

Other winners at Fonda on Saturday included Dylan Eldred who won the first of his career at Fonda in the limited sportsman division, Luke Horning (pro stock), and Jason Samrov (street stock).

The racing events were held in appreciation of all EMS and Firemen, which Fonda Speedway has its own all-star crew consisting of Terri Mohrman, Bonnie Reuss, Dwayne Gallt, Derek Howell, Amy Siedel, Glen Robers, and Bill Rose.


A great field of 26 modifieds came down to the start of the 30-lap modified feature which saw the red flag out for a wreck in turns one and two before any laps were completed. Involved in the wreck were Shaun Pangman, Cody Bleau, and Jimmy Davis who were all done for the evening at that point but were not injured in the wreck. After two more tries at getting the event started Rocky Warner was the early race leader and immediately pulled away from the rest of the field.

Outside front row starter Troy Palmer and ninth place starter Jeremy Wilder sat in the second and third positions early on with 15th place starter Stewart Friesen making his way into the top five by lap four just behind Scott Huber. Friesen and 10th place starter Josh Hohenforst both got by Huber for the fourth and fifth positions two laps later with Warner now out to over a straightaway advantage.

Wilder and Friesen both got by Palmer for the second and third positions on lap eight with another red flag out for a multiple car wreck in between turns three and four. The wreck involved the leading car of Warner who came in contact with another car that was stopped on the track. Warner’s car caught fire briefly but the safety crew was right there to put out the flames quickly as Warner exited the car on his own power.

Eight cars were involved in the wreck including Darwin Greene, Elmo Reckner who flipped his car at the entrance to pit road, Jeff Rockefeller, Pep Corradi, Ryan Odasz, and Reggie Bonner. As of last evening many of the drivers in the wreck were sore but no major injuries were reported.

Wilder inherited the lead for the restart but never actually led a lap as Friesen swept around the outside of him in turn two to take over a lead that he would never relinquish. At the halfway point in the event Friesen was the race leader followed by Hohenforst, point leader Bobby Varin who started 11th, Wilder, and 13th place starter and defending track champion Tim Fuller.

Friesen went on to the win in the Halmar DKM “Cyclone” car, his sixth win of the season and the 53rd of his career at Fonda over Hohenforst, Varin, Fuller, and Wilder and was presented the winning trophy by Miss Fonda Fair and the Fonda Fair Princess.

“I felt bad for Rocky (Warner) who was flying tonight,” Friesen said in victory lane. “He is going to win a lot of races in that modified. Track conditions were challenging tonight but Fonda Speedway is my home, I love it to death, and I thank all of the fans for supporting it.”

The 25-lap sportsman feature started out the same way the modified feature did with three attempts necessary to get it going. When it did finally proceed without caution, pole position starter Jason Greco was the race leader followed by Mike Jackson. Greco held a straightaway advantage by lap five with seventh place starter Cody Clark the new second place car after getting by both David Manchester and Jackson.

Edwards got by Clark for the second position on lap 19 and one lap later was the new race leader after getting by Greco on the outside of turn four. But the race was far from over as Clark, McAuliffe, and Farone also got by Greco for position. McAuliffe got by Clark for the second position with one lap to go and on the final lap got by Edwards in turn two for the lead and the win in the Ed McAuliffe Trucking #234 DKM “Cyclone” car.

McAuliffe was followed by Edwards, Clark, Farone, and Greco at the checkered flag. For McAuliffe it was his first win of the season at Fonda and the seventh of his career in the division, his last win coming three years ago on 7/18/2015. Ironically looking back in the record book Friesen and McAuliffe were also the feature winners on that night, 7/18/2015.

Jason Morrison led the first two laps of the pro stock feature, which featured a caution during each of those laps, before Cassidy Wilson took over the lead on a lap three restart after starting third. Seventh place starter Luke Horning moved into the second position on lap four and from that point on it was a free for all, lead swapping battle between Wilson and Horning up until just after the halfway point in the event.

“I really didn’t think that I had anything for the 82 (Wilson),” Horning said in victory lane. “There was more bite up on top and I was able to get by him for the lead and the win but he definitely showed that his first career win in the division a few weeks ago was no fluke.”

Jason Samrov took the lead on an original restart in the 12-lap street stock feature and never looked back, leading every lap on the way to his fourth win of the season and the seventh of his career in the division over Rob VanAernam, Johnny Young, Cliff Haslun, Michael Arnold, Dave Horning Sr., and Kenny Hollenback (DNS).

Next Saturday, July 28 at the “Track of Champions” a very special event will take place at the Fonda Speedway Museum as the class of 2018 Hall of Fame Ceremonies will take place. Racing action will begin at 7:00 p.m. with a regular racing program in all divisions along with the Mohawk Valley Vintage Modified Series (MVVDMS).