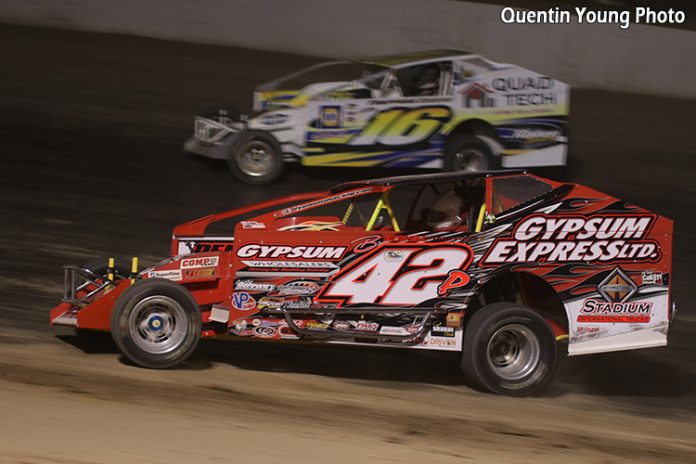 Jeff McGinnis and Glenn Forward battled hard at the start of the 35-lap Small Block Modified main, swapping the lead a few times in the process. Forward finally broke free from McGinnis with ten laps complete, building up a lead that quickly reached two seconds. As Forward held strong out front, McGinnis fell back into the clutches of Bowman and Pat Ward.

Bowman was able to slide around McGinnis on lap 18, with Ward following as well. Tim and Tom Sears then joined the fight for second, closing on McGinnis, Ward, and Bowman. Meanwhile, Forward’s lead was shrinking as the rest of the pack was closing fast.

With just over ten laps left, the top three were under a blanket, with Glenn Forward up top, Mike Bowman in the middle, and Pat Ward down low. Ward rolled under Bowman to claim second on lap 25, now just feet behind Forward for the lead. A slight slip up high from Forward was all Ward needed, as Pat Ward drove to the point with eight laps left. Bowman got by Forward at that time as well, and Tom Sears Jr. was catching fast.


Bowman wasn’t letting Ward run away and hide, as Bowman hung within a couple car lengths under five to go. Just behind Bowman was Tom Sears Jr., scratching and clawing to find a way by. While Bowman and Sears hung close, there was no stopping Pat Ward from claiming his second win of the year at Fulton. Tom Sears Jr. grabbed second at the finish, with Bowman, Ronnie Davis III, and Tim Sears Jr. completing the top five.

After citing some struggles with his previous car, Ward noted the chassis he was driving was a 2014 coil car kept in the corner of the shop, the yellow frame pointing at its former driver being Billy Decker.

“We didn’t have enough gear in this car early, and the slipperier it got, I still didn’t have enough to get off the corner as good as I hoped,” Ward said. “I think they all got their right rears hot running up in the middle and the top. I just kept running around the bottom and kept the tires cool, and it came on right at the end.”

A strong field of 57 Sportsman meant two large features. In the first main, Jackson Gill rolled under DJ Forbes in the middle stages of the event for the lead, then drove off to a dominating third win of the year. The second feature saw a fantastic battle between high-flying Scott Prentice and tire-hugging Corey Barker. The pair ran door-to-door for the final 15 laps, with Barker beating Prentice to the line by a car length for his second Fulton checkered of 2018.

The Barker and Prentice show wasn’t the closest of the night, as Austin Germinio chased down Pat Nolan in the final laps of the Novice Sportsman feature to win his second race in three starts by about three feet. Kevan Cook rolled around Dale Caswell halfway through the Late Model main to pick up another full-fendered feature victory.