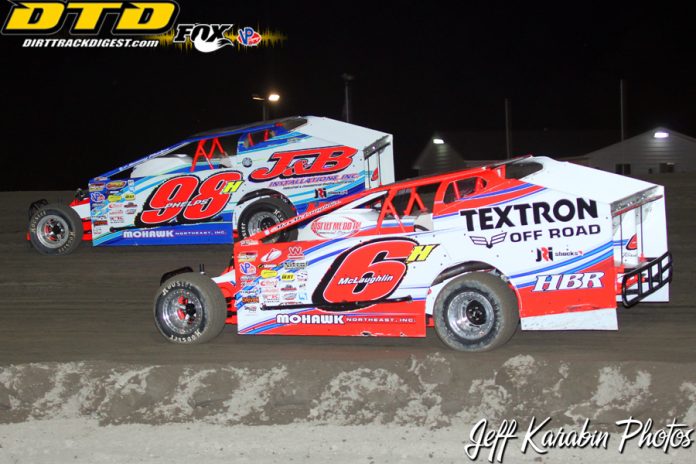 CONCORD, NC – The city of Plattsburgh sits on the edge of Lake Champlain, which serves as the border between New York State and Vermont. The lake is famous for a giant lake monster known as Champ, which is exactly what the Big-Block Modified drivers of the Super DIRTcar Series want to be when they roll into Airborne Park Speedway on Tuesday, July 31. Last year marked the inaugural visit to the Upstate New York race track after ownership decided to return the asphalt surface to dirt. Larry Wight raced to his first of two 2017 Series wins in the 100-lap contest.

With plenty of racing left in 2018, the Series Championship is up for grabs with a few favorites climbing up to the business end of the standings. Matt Sheppard is on top of the points chase with race wins at Cornwall Motor Speedway and Brewerton Speedway. Close behind in second place is Max McLaughlin in the no. 6H, who has strung together an impressively consistent season. However, the 18-year-old is still looking for his first Super DIRTcar Series win. Mad Max was the runner-up at Airborne Park Speedway last year. Phelps took third, so it’s clear that the HBR stable will show up with a solid notebook.
Danny Johnson has broken up the HBR party by capturing three podium finishes in a row. After a third place run at Outlaw Speedway, The Doctor has overtaken Jimmy Phelps in the no. 98H for third in the points standings. Phelps has experienced the highest highs and the lowest lows this season. After a streak of third place finishes, Phelps finally broke through with a win at Utica-Rome Speedway. The next race after his win, the Ultimate Outlaw 100, saw Phelps spin in front of the field and take race-ending damage.

Racing at Airborne on July 31 starts at 7:00 PM. Joining the Super DIRTcar Series Big-Block Modifieds are Mini-Mods, Sportsman Modifieds, and Super Stocks. Airborne Park Speedway runs DIRTcar 358 Modifieds weekly, so watch for local drivers like Steve Bernier and Chris Raabe to take on the invaders in the north country.