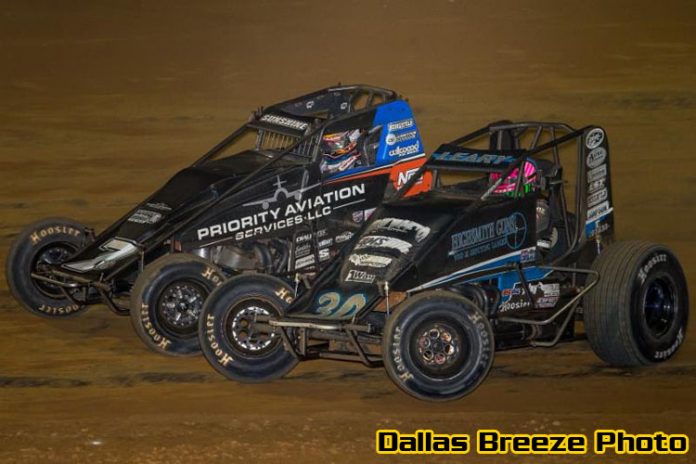 LAWRENCEBURG, IN – Tyler Courtney withstood racelong challenges to his throne throughout Sunday’s second round NOS Energy Drink “Indiana Sprint Week” feature at Lawrenceburg Speedway as the Indianapolis, Indiana native went on to score his series-leading sixth win of the year and his second career in ISW.

On paper, Courtney’s two career ISW victories appear to be in stark contrast with each other. The one in 2016 at Gas City I-69 Speedway was his first USAC AMSOIL National Sprint Car win of his career. Courtney spun on the opening lap, restarted from the tail in 24th and drove to an unexpected and spectacular victory.

Sunday night at “The Burg,” a glance at the stats show that Courtney started from the front row and led all 30 laps. Some say stats don’t lie, but sometimes, yeah, they don’t actually tell the whole story.

“I think the box score is going to make it look a lot easier than it really was tonight,” Courtney pointed out. “I would say tonight was definitely a lot tougher (than the 2016 win). At the last one, I was committed to the bottom and I wasn’t going anywhere else. If it didn’t work, it didn’t work. Tonight, I felt like I had to earn it a lot more than my last Sprint Week win, but they’re never easy. I’m not going to say that one was too easy. After all, I had to drive by a guy by the name of Bryan Clauson to do that.”


On the initial green, second-starting Courtney and pole sitter Boespflug went nerf bar to nerf bar for the bulk of the first two circuits, with Courtney officially pinning the tail on the first lap by a wheel before trouble ensued on the second lap.

Bloomington 2016 ISW winner Brent Beauchamp flipped over once in turn four after Carson Short got sideways in front of him and Thomas Meseraull clipped the front end of Beauchamp’s ride. Beauchamp’s crew made repairs in time for him to restart while Meseraull’s night was finished.

Following the restart, Dave Darland became an instant challenger, pulling off a two-for-one deal by ripping past Shane Cottle and Boespflug to move from fourth to second on the totem pole in one move on the bottom of turn three. The USAC Triple Crown champ was eager to become the successor, dipping below Courtney on both ends of the racetrack to no avail as Courtney was able to muster enough mustard around the outside to maintain the advantage.

Courtney, meanwhile, wasn’t merely satisfied with standing pat. Instead, he was searching, searching, high-low-bottom, whatever he felt could do to stay a step ahead to maintain possession of the coveted lead.

And how he did. Reigning Lawrenceburg ISW winner C.J. Leary was a sparkplug in the third and final frame, rolling by Darland on the inside of the third turn for third, then around the outside, around the outside of Cottle two laps later by the mid-point of the back straightaway. With a mere six to go, Leary began peeking a nose under and above Courtney, which got his attention and the proverbial book of mental notes out for the race to the checkered.

“We had a really good car to start the race and I think we faded a little bit there,” Courtney admitted. “I was just kind of running the wrong lines. I felt like I had a good enough car there and could cruise for a little while, but I kept hearing somebody get closer and closer. Then, he finally made a move on me and I got to kind of see what he was doing, so I could change my line up and try to protect as good as possible.”

On the 26th lap, Leary found a big wave to ride wheel-to-wheel to the inside of Courtney entering turn one. Leary let the car ride out at the exit of two, leaving a scant amount of room for Courtney to thread the needle between Leary’s right-side tires and the concrete. Yet, Courtney stood his ground and regained the upper hand for the meantime as the relentless Leary threw the kitchen sink, the kit and even the kaboodle at him, sliding across Courtney’s nose on lap 26 and 27, but each time, Courtney naysayed emphatically, countering back to the lead each time.

“There for a while, I think it was more of a protective line,” Courtney recalled. “Then, I figured out how to run it harder so it could become more of a line that I wanted to run. You never want to admit you’re protecting, but you got to do everything you can to win these races. It was tough, but we don’t do this because it’s easy. If it was easy, anyone could do it. Races like that are why we keep doing this. You got to dig down deep and it brings out the competitor in us that we all have and the reason why we do this sport.”

Following a red flag on the white flag lap that involved Cottle and Justin Grant colliding into the turn one wall and Isaac Chapple getting upside down, a green-white-checkered situation was at hand, pitting Leary right on Courtney’s tail for the restart. Leary attempted a little mind game, tapping the back-bumper of Courtney under caution to give him a little reminder that he had company.

“I knew what he was trying to do,” Courtney said. “We’re professionals. We’re hired to do what we do. But you got to keep those things out of your head. You got to do your job. I knew I was going to have to hit the bottom of one and two on the restart to make sure that was the only way they were going to get around me. I did my job there on the restart to protect myself and not let anybody slide me.”

When the green flag fell, Courtney minded his P’s and Q’s, sprinting away to a healthy lead while Leary ran roughshod all the way up to the turn two wall, ultimately dropping to fifth at the end as Kevin Thomas, Jr. went on by for second.

This one would be Courtney’s for the sixth time this season with the series, already equaling Kevin Thomas, Jr.’s series-leading six wins of 2017. Thomas was second ahead of Brady Bacon, Chris Windom and Leary.