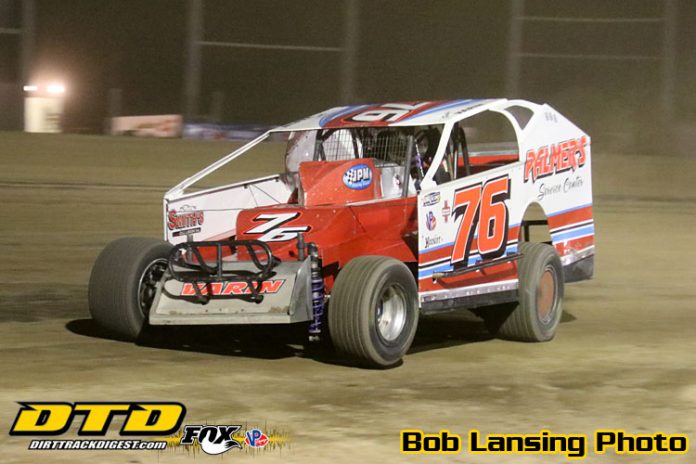 VERNON, NY – Bobby Varin returned to Utica-Rome Speedway victory lane for the first time in six years, holding off Mike Mahaney in a thriller on a lightning-fast surface.

Lance Willix slid past Billy Whittaker for the lead early in the 30-lap Small Block Modified main, with eighth-starter Varin charging into second soon after. Once in second, Varin closed in on Willix for the top spot, throwing his first punch on lap six. After two slide jobs by Varin and another by Willix, Varin secured the point by lap eight. Soon after, Willix surrendered the runner up position to Bobby Herrington after another pair of sliders.

By halfway, Varin had established a steady second and a half advantage over Herrington. Behind the frontrunners, Mahaney was drawing attention, rightfully so after charging from 14th to fourth. Lucas Heintz spun on lap 18 to bring out the sole yellow of the feature, bringing the pack back to Varin.

Mahaney shot himself out of a cannon on the restart, blasting by Willix and Herrington on the cushion. Slowly but surely, Mahaney closed in on Varin, drawing to within a car length at five to go. On lap 22, Varin went to the bottom of turn one, with Mahaney flying around the cushion again. With his right foot smashed to the floor, Mahaney got a massive run on Varin, drawing even for the lead coming to two to go. However, the leaders were about to reach the tail of the field.


The first lapped car the top two encountered was running Mahaney’s preferred groove, and Varin used the slow traffic as a pick to hang on to the lead. By the time Mahaney got past the lapped car, the white flag was ready to waive and Varin had a four car length lead. Mahaney made one last effort for the win, but the right rear tire on his mount shredded entering the final corners.

From there, all Mahaney could do was watch as Varin rolled to his first Utica-Rome win of the season and his first since 2012. Billy Dunn claimed second from 13th, following by Bobby Herrington, Pat Ward and a limping Mike Mahaney.

“Early in the race, Lance Willix and I had a heck of a race going on,” Varin said. “I was just trying to find a way to get by him, and there at the end I thought it was going to be a repeat of last week. We had a fast car early, but it started to go away a little at the end, so we still have a little figuring out to do.”

The King of Dirt Pro Stocks joined the stacked card for a 40-lap feature, double the normal distance of a weekly feature. Rich Crane darted from 8th to the lead in the first lap, riding the cushion away from the field in a big way. By halfway, the gap between Crane and Pete Stefanski was nearly six seconds.

In the late stages of the race, Stefanski steadily closed in on Crane, knocking time off lap after lap. By the time the white flag was waiving, Stefanski had shrunk the gap to just a handful of car lengths, but it wasn’t enough to stop Rich Crane from claiming victory in the caution-free King of Dirt Pro Stock event.

The Sportsman division had a little extra incentive to drive fast this week, as the Mike Martin Memorial boasted a $1,000 to win payday. Kevin Root took command early over Charlie Tibbits, Matt Janczuk, and eighth starter Dave Marcuccilli. Marcuccilli quickly disposed of Janczuk for third, then rolling around Tibbets for second on lap nine. By this point, Root had established a comfortable second and a half lead.

While Root had a solid advantage at the time Marcuccilli got to second, it rapidly disappeared. On lap 12, Marcuccilli swung to the top of the track and disposed of Root for the lead, instantly pulling away. A yellow with three laps to go gave Root and Janczuk one last shot, but there was no stopping Dave Marcuccilli from scoring the big check in the 20-lap shootout.

Rain pushed back the start of hot laps until 8:15, with the Modified feature ending just before 10:00. The final events, the Novice Sportsman and demolition derby, fell victim to rain that surrounded the speedway for the entirety of the 358-Modified main.