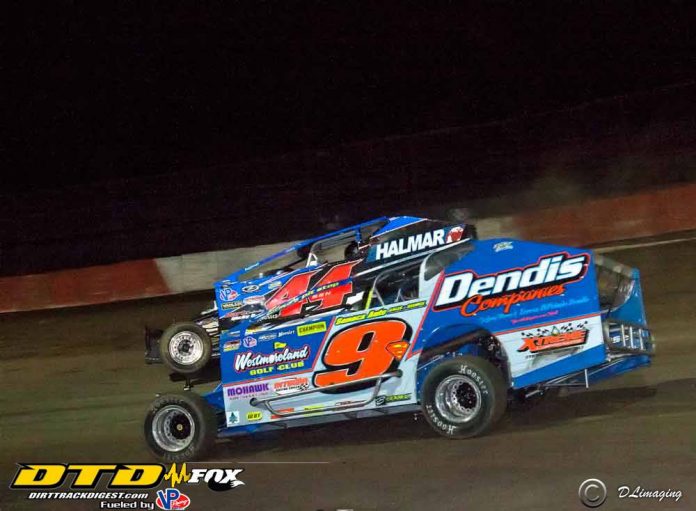 GRANBY, QUE – Late in the race, Stewart Friesen, five-time NAPA Super DIRT Week Champion and NASCAR Camping World Truck Series talent, pulled alongside current points leader and defending NAPA Super DIRT Week Champion Matt Sheppard on the back stretch and powered ahead to take the lead at Autodrome Granby with a quarter of the race to go.  Friesen held off Sheppard and all challengers to score the $6,000 win. “What a tough race. We were awful at the beginning. I made a bunch of adjustments inside the car to keep up with it. I could have killed Eric for the shock selection before the race, but it paid off in the end on the long run. Wow, finally to win one here in front of all the Canadian fans. Man, it feels so good. It’s been spectacular (the last few weeks). I gotta thank everybody at Halmar International for giving me the opportunity to come out here and run all these races and all these great race fans that support us and wear our shirts, chase us all over the place, and watch on TV. I appreciate each and every one of you. Thank you so much. I’m so proud to be Canadian.”

Friesen battled with Sheppard from the mid point on taking the lead on lap 64.  The duo were the class of the field until four laps to go Sheppard suffered a right rear flat to bring out the caution flag.

HBR Motorsports driver Jimmy Phelps and Erick Rudolph in the no. 25r lined up behind the Halmar Racing no. 44 of Friesen, poised to take a stab at the lead. Unfortunately for both of those drivers, Friesen’s car never faded and kept ahead of his challengers.

Friesen was overjoyed with his first Series win at Autodrome Granby, as well as his second Series win on Canadian soil. After climbing on top of his car, Friesen showed the massive Canadian crowd how much Canadian pride he has. After clamoring down from the roof, the first thing he said was, “Oh Canada! It’s about time!”


Runner up Phelps discussed the speed on the track and his second place effort on Monday night.

“The track was heavy, fast, and challenging. It took us a long time to get to be a third-place car. The track needed to slow a little bit and the guys who were up front needed to slow a little bit. Fortunately, we caught a couple restarts there late. We got some track position back. It would have been nice to be a little better on the last run there—maybe we could’ve given Stew a shot. But we’ll take second.”

After a couple difficult races, including breaking the car and finishing last at Outlaw Speedway, Phelps needed a strong run to keep up in the points standings. He moved back up into third in series points after benefiting from Sheppard’s woes.

Phelps and Max McLaughlin had an intense side by side battle in which The Baldwinsville Bandit was victorious. Despite racing for the same championship points and real estate on the track, Phelps does not view his relationship with Max McLaughlin as a rivalry. Instead they, “look out for each other. At the end of the day it’s too good to see him run up front. He’s come a long way in a few short years.”

Rudolph got on the podium again in 2018 even though his car was ill handling for most of it.  It was the second race in a row that Rudolph found himself on the podium.  He was was once again in the right place at the right time.

“For three-quarters of the race I didn’t feel like we had a racy car at all. But it came alive a little bit at the end. We kept it in one piece and were able to put it on the podium.”

Danny Johnson rebounded from an early incident to finish in fourth with Brett Hearn rounding out the top five.

Throughout the afternoon and into the evening, the track was taking spotty rain showers. The racing surface was well taken care of by the Autodrome Granby staff, and it was ready to go at race time. With water, no sun, and no wind, the track retained its moisture, making for an extremely tacky racing surface.

Rudolph moves into second in points -111 behind Sheppard. Phelps moves up to third and McLaughlin falls to 5th.

Our next event is at Autodrome Drummond July 24.