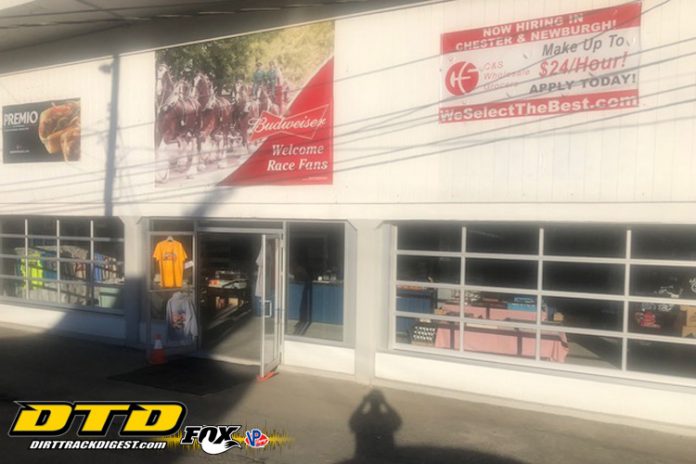 County Fairgrounds and Speedway. This was our third trip to Orange County this season, which is unprecedented for us, because it’s safe to say in later years we’ve only gone to Eastern States and that’s only because it was the tradition of Eastern States. As for the changes so far, it’s simply amazing what has been done. The bathrooms alone, will surprise anyone and according to Chris they had to meet one standard, that his wife was willing to use them. We can only say, mission accomplished. Everywhere you turn on the grounds you will see some of the improvements and there are more to come. Replacing the food concession booth under the grandstand, is a fully stocked racing collectible store run by Dave who formerly sold his stock out of his trailer. We’ve often talked about what it would take to bring the fairgrounds back and honestly we were skeptical but no more. Chris Larsen has taken his love of racing and Orange County and put much of it into bringing the historic oval back to life and into the future. Also present on Thursday night for the SDS event was Gary Balough and his famous No. 112 Batmobile. We snapped this photo of Gary, Miss AARN and Chris Larsen before the racing started. We’ve started the book and spoke to a few who have read it and it pleases us to see how some may have changed their attitude about what they think of the veteran racer who thrilled the crowds on the Northeast dirt tracks in the 1970’s and 80’s.

Being at Orange County during the fair for a Super DIRTcar Series event brought back many memories. We remember a night when Sammy Beavers, Gary Balough and Tommy Corellis squared off against each other ending with Balough taking the checker and Corellis getting the guaranteed starting spot for Super DIRT Week in 1977. On Thursday the pits had over forty big block Mods and nearly thirty 358 Mods, the big blocks were racing for $10,000 to win and a starting spot at Oswego in October. The 358 Mods raced 25-laps for $3000 to win with a bonus of $3000 to the driver that could win both the big block and 358 events. This never came to be because the Modified winner was Stewart Friesen in the Halmar No. 44 and he did not compete in the 358 Mod event. Winner of that was Anthony Perrego.

This Thursday, July 26 is the 27th annual Dirt Modified Hall of Fame inductions at the Hall of Fame Museum on the grounds of the Weedsport Speedway. The event is free and open to the public and will be a must attend event for many in the capital district as two local racing personalities will be inducted. The driver of the Tremont No. 115 Kenny Tremont, Jr. will join Brian Swartzlander and Bob Rossell as drivers being inducted.


Since his first win at Lebanon Valley on May 29, 1982 Kenny has won a total of 131 Modified features on the high banks, putting him at the top of the win list. He has been Modified champion at The Valley 13 times and 358 Mod champion four times . Tremont, Jr. has won at 20 different tracks along the east coast, has 13 Modified titles at Albany Saratoga and eight at Devil’s Bowl in Vermont. The Tremont No. 115 with Kenny at the wheel has single championships at Rolling Wheels, Utica Rome and Glen Ridge. He has two Mr. DIRT 358 championships and was the winner of the 200 lap event at Super DIRT Week in 1999. We’ve seen Tremont race from the beginning of his career and it will be a thrill to see him accepts this honor.

Don and Jo Ann Davies will receive the Andrew S. Fusco Award for Media Excellence. The Davies are well know throughout the Capital District tracks and beyond. After meeting in college and getting married they turned their passion for racing into a way of life. The past 46 years Don and Jo Ann have covered Northeast racing first for Speedway Scene and now Area Auto Racing News. As colleagues of the Davies we want to say there is no team more deserving of this award than Don and Jo Ann. We love seeing them wherever we attend races and know we can always depend on Don for the facts and Jo Ann to liven up the media tower.

Saturday we made the trip to Lebanon Valley for the NESCOT (North East Stock Car Old Timers) meeting and got a first look at their 2019 lottery calendar. Along with some great racing photos the calendar gives you 80 chances at prize money totaling $1425. Mark Krosky and others that helped with the effort did a fantastic job and we think it will be a big hit at local tracks. NESCOT also voted to travel to Super Dirt Week in Oswego in October again this year where the club also becomes a big part of the festivities and sponsors several events during the week. Money raised from sale of the calendars is used to help those in the racing community in a time of need. A big upcoming event for NESCOT is the annual steak bake at the Nassau Sportsman Club on August 26th. Tickets are available from Rich Carpinello (518) 477-8352, Mark Krosky (518) 894-0197 and Frank McKay (518) 451-6492. So far this season, young Derrick McGrew, Jr. is one of the most winning drivers at Glen Ridge and is currently leading the Limited Sportsman points by 100 points. On Sunday he was forced to the pits with a flat tire at the beginning of the feature, returned to the rear of the field and made his way back to take the lead on lap 18 of the 25 lap Limited Sportsman feature. In coming through the field he drove with the smoothness of a veteran driver despite his young age. On this night he took home prize money and a bonus totaling $300 for his win. Later in the night, McGrew, Jr. ventured out to run the Crate Modified event and started last and came home with a third place finish.