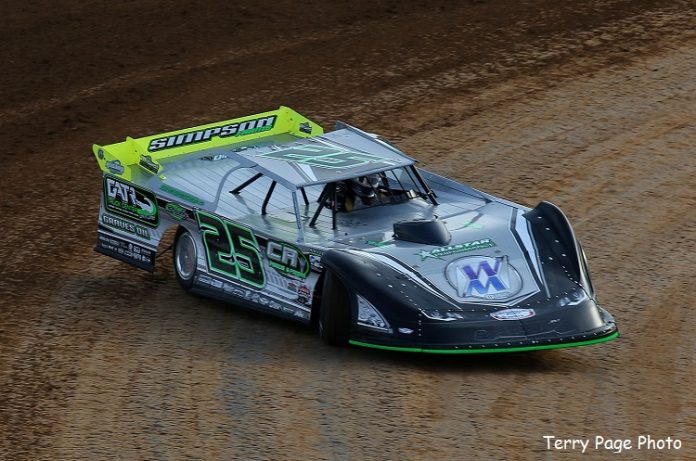 DAVENPORT, IA — For the first time in 11 years, the World of Outlaws Craftsman® Late Model Series paid a visit to Davenport Speedway on Tuesday, July 24. The big half-mile located just west of the Iowa/Illinois state line and part of the Quad Cities in Davenport, IA was the site for a $10,000-to-win payday and first race of a marathon two-week stretch for the most powerful stock cars in the world. At the end of the 40-lap Feature, Chad Simpson, from nearby Mt. Vernon, IA, made the home state fans happy by scoring his first career World of Outlaws win in front of an overflow capacity crowd at the Mississippi Valley Fairgrounds oval.

“I can’t say enough about this team. They’re the ones that made this happen. Everybody. The sponsors, the guys that help me, the ones that do the wrenching — they made this all happen,” an elated Simpson stated in Victory Lane after climbing from his No. 25 GATR Truck Center / Black Diamond Chassis / Jay Dickens Racing Engines entry surrounded by his crew, family and friends. “I kept looking at the scoreboard to see who was behind me. Then after that yellow flag, I never looked again except to check how many laps were left. I was watching them count down, and I never knew who was behind me after that,” laughed the 39-year-old Hawkeye State native.

Simpson and current Series points leader Mike Marlar led the 23-car field down to the green flag to start the main event, with Simpson showing the way in the early stages. Marlar would not let Simpson stray too far out in front and kept pace with him in a very fast paced event. Defending Series Champion Brandon Sheppard soon found himself in third from his sixth starting spot, slowly reeling in the two race leaders.

As the crossed flags signal was given, Marlar was sizing up Simpson, looking for a way around, but had to also deal with Sheppard who caught the front row starters. With 13 laps to go, Sheppard’s night ended in a plume of smoke forcing him to pull onto the adjoining quarter mile and calling it a night. With eight laps to go, the night’s only caution flew, bunching up the field. On the restart, Marlar went high to try to get around Simpson but slapped the turn four wall on the following lap and lost several positions. This placed Chris Madden in second, and he began to challenge Simpson for the win. Simpson was up to the task, however, and fended off the hard-charging Madden to score his first career Series victory.

Madden settled for second in his No. 44 Century Plastics / Barry Wright Racecars / Clements Racing Engines machine. “We waited one lap too late to pull the trigger on Chad (Simpson). I kept waiting for him to slide out of that bottom. He was getting tight across the middle, and I felt like he was going leave the door open for us,” explained the 43-year-old from Gray Court, SC. “I should’ve went ahead and went to the top in one and two earlier and drove on by him. We definitely had the car to do it. But we have to take second tonight,” he added. Madden did gain on points leader Marlar, and is now just 18 markers back heading into the 29th annual Prairie Dirt Classic.


Simpson’s brother, Chris Simpson finished third after starting in 12th in his No. 32 Cheap Cars / Longhorn Chassis / Durham Racing Engines ride in just his third appearance of the season, earning the KSE Hard Charger Award in the process. “We just started too far back. We were running on the top at the start of the race and eventually got to the bottom. But we used up our right rear getting up to the front,” offered the 34-year-old from near-by Oxford, IA. “It is pretty cool to see my brother (Chad Simpson) win this one. He’s been working his butt off and winning here in Iowa is pretty special. Plus, having two Simpsons in the top three is pretty special too,” he smiled.

Earlier in the evening during preliminary events, 2017 rookie of the year, Devin Moran won his third PFC Brakes Fast Qualifier award of the season over the 23-car field with a 20.756 and also collected a Heat Race win. He would discover engine issues after his heat race win, forcing him to a backup car for the Feature. Marlar and Chad Simpson also collected heat race triumphs.

The World of Outlaws Craftsman Late Model Series continues with the Wild West Shootout (Take II) with a trip to Fairbury American Legion Speedway (IL) on Friday-Saturday, July 27-28th for the 29th annual Prairie Dirt Classic. The $30,000 to win main event of the weekend will see the action start on Friday, July 27th and features four 25-lap World of Outlaws “Showdown” qualifying features paying $2,500 to win and $200 to start apiece. The July 27 card will see drivers split into four features based on qualifying times with the top four finishers in each race transferring to the next night’s 100-lap headliner and the top two redrawing for starting positions in first four rows of the PDC.

The Saturday, July 28 program will include three Last Chance Showdowns that move six more drivers onto the century grind. Two World of Outlaws and two FALS Provisionals will round out the 26-car starting field for the PDC, while one more starter could come from the ninth annual Prairie Dirt Shootout presented by Summit Racing Equipment for non-qualifiers that offers its winner the option of taking the $2,000 first-place prize or the 27th starting spot in the 100-lapper.

For more information on the Prairie Dirt Classic presented by Bank of Pontiac visit: fairburyspeedway.com. Tickets are still available online, and the event will air live on DIRTVision and DirtonDirt.