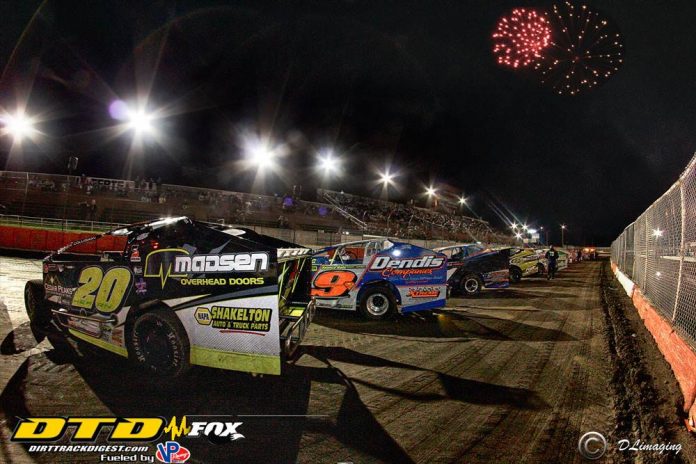 With the Quebec leg of the Super DIRTcar Series in the history books, it once again provided La Belle Province has one of the biggest fan bases for the series in North America, with capacity crowds at both Autodrome Granby and Drummond.

The first night of racing was held at the historic Granby Speedway just on the outskirts of the Town of Granby.

Weather conditions were not the best for the opening night as the risk of thunderstorms and showers plagued the track for the entire day. In the end, the fans came and kept coming as the event began to unfold.

Yes, there were some delays at the start and a rushed program due to weather conditions, but once the green flag was dropped, the capacity crowd was enthralled with the race, watching every lap unfold.


Most would not understand the passion Quebecers have for their racing and especially for the Super DIRTcar Series. It is more of a festival at each of the tracks with fans or groups of fans cheering on their favorite driver. Dominic Lussier, owner of the Granby Speedway and promoter Yan Bussiere of Autodrome Drummond always provide ways for fans and drivers to get involved and enjoy the night’s racing in a festive way.

As the first night of racing continued to roll on at Granby, it was clear that current points leader Matt Sheppard along with Canadian driver Stewart Friesen were in a class of their own and clearly the front-runners.

Lap after lap the two dueled for the lead, but Friesen would take the checkered flag in the end, as Sheppard’s car slowed with four laps to go. Friesen, ecstatic with his first series win in Quebec, thanked the crowd “to win one here in front of all these Canadian fans, I’m so proud to be Canadian,” Stewart explained.

With Granby complete, it was time to move onto the next race with the series rolling into Autodrome Drummond, with once again a capacity crowd in a festive mood.

The weather was definitely more favorable for the crowd at Drummond, and with 35 cars answering the call, the second night of the series was shaping up to be equally as good as the previous night.

As at Granby, the four groups of cars moved seamlessly through the time trials and heat races with some spectacular racing and then it was on to the feature.

The Drummond crowd, however, were treated to the traditional draw for the starting positions, as Granby had to cancel their draw due to weather. Fans encouraging each of the top 12 drivers as they picked there starting position by draw, before strapping themselves in their cars as they moved on to the feature event. Once the green was shown, the fans cheered as the 30 car field roared past the starter.

Within a few laps though, it was clear once again that Sheppard and Friesen were in a class of their own, repeating the 100-lap dual. This time, however, Sheppard would come on top taking home the Racing Stock 100, $6,000 prize.

The Quebec swing of the Super DIRTcar series is one of those special shows, a favorite with fans and drivers. However, there were a number of the regular drivers missing for this round of the series. A bit of a disappointment for fans, and at this point, unclear what caused this shortage of participants, but a good contingent of local racers filled in the void.

A fresh face within the group of racers, however, was the return of Eric Rudolph whom I asked about his upcoming races.

“I had a good run a few nights ago at the Orange County Fair Speedway and hope to carry this momentum here in Quebec. I will surely give it my best but there is some good competition here on hand.”

In the end, the 26-year-old walked away from Quebec with two, third-place podium finishes. Rudolph moves into second in points behind Sheppard.

For those of you who have never experienced the Quebec leg of the Super DIRTcar Series tour, it is well worth the drive. It is a festive spirited group of fans with some great food, drinks and especially their famous traditional Quebec poutine.

Dominic Lussier and Yan Bussiere always put on a great show for fans that walk away with a memorable experience.

The Super DIRTcar series is scheduled to return to Quebec later this year for two more races — September 7 at Le RPM Speedway in Saint-Marcel-de-Richelieu, and Autodrome Drummond, September 8. Now is your time to plan your trip to take in this Quebec experience