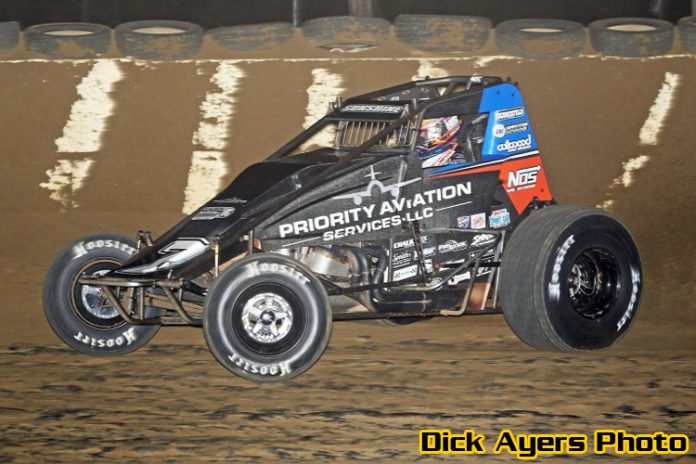 TERRE HAUTE, IN – What looked like a surefire runaway turned into an old-school dog-fight in the final laps of Wednesday’s Dorsett Automotive “Don Smith Classic” / NOS Energy Drink “Indiana Sprint Week” round at the Terre Haute Action Track.

Tyler Courtney saw a nearly half-lap lead disappear in the final ten laps of the caution-free race, withstanding a Robert Ballou slider on the final lap to score his second ISW victory in the last three races.

It’s another reward for what has truly been a momentous year for Courtney.

Coming into the year, the Indianapolis, Ind. driver possessed six career USAC AMSOIL National Sprint Car wins. Now just through July, he’s already surpassed that, having tacked seven more onto his all-time total. No driver even had seven wins in all of 2017 with the series.


In the process, he’s now taken the ISW point lead by a single marker with three races remaining and he’s now won at Terre Haute twice this season. But this latest one is special for it coming in the raced named in honor of a man who believed in young Courtney’s racing career some years back, helping him get started on this path that has ultimately led to a career year in 2018.

“This is really special,” Courtney exclaimed. “Don (Smith) was one of my first sponsors and part of the reason I got to run my first Chili Bowl. He’s passed away now, but he made a huge impact on this sport not only as a car owner and a promoter, but he would do anything for anybody. To get another win here at Terre Haute and then one in honor of him tonight, is pretty special.”

Courtney began the main event from the fifth position, but the trek to the front appeared as if somebody lit a fuse on the Clauson Marshall Newman Racing/Priority Aviation – NOS Energy Drink/Spike/Rider Chevy. By lap three, he took over the race lead from Kevin Thomas, Jr., who had chosen to rock the low limbo line around the half-mile dirt oval early on. Courtney stayed true to the top and sped by Thomas at the exit of four to secure the lead, though Thomas initially fought back, but to no avail, ultimately deciding to change lanes to the top and follow Courtney’s fashion.

In just a few laps, Courtney extended the advantage to a half-straight, then to a full-straightaway by lap 12, putting a hurting on the competition and standing tall as the class of the field.

Meanwhile, flipping channels back to the battle for the second position, K. Thomas and Ballou were tussling for second on the 16th lap with Ballou first taking the spot, K. Thomas re-racking second momentarily with a slider in turn three, then Ballou countering to make second place his own off four.

Courtney rode the waves through lapped traffic with relative ease, at least initially, up on the cushion, and maintained a sizable half-lap lead with a mere seven laps to go. Yet, this thing was far from over as Courtney got caught up in a proverbial orange barrel zone, stuck where he was and unable to maneuver past others as smoothly as he was just moments ago while Ballou served as the sun’s rays, evaporating every fluid ounce of a lead Courtney once held.

“I think it was me getting tentative through lapped traffic,” Courtney admitted. “I saw a couple guys get over the cushion, in the wall over here, and just tried to make sure they weren’t going to do anything too drastic. Dave (Darland) kind of changed lanes on me there and I had to whoa up. He was still racing for position, so he’s got to do what he’s got to do.”

The sudden sea change was inescapable with Ballou crashing Courtney’s party like a bear rifling through a picnic basket. With two laps remaining, Ballou was just one car-length separated from the tail-end of Courtney and sizing him up for one possible shot at glory.

In turn one of the final lap, Ballou fired that shot with a slide for life into turn one, darting to the bottom guardrail and drifting up the track side-by-side with Courtney. Courtney had just enough oomph to push off turn two and separate from Ballou, ultimately scoring the victory over Ballou Justin Grant, Brady Bacon and Kevin Thomas, Jr.

“I didn’t see Robert until the middle of the corner and I knew it wasn’t a lapped car,” Courtney recalled. “I was like, ‘Oh, I got to get down the back stretch as quickly as I can.’ I knew he was going to be struggling getting off two sliding me like that. I knew I was going to have to be perfect in three and four to not risk anything and getting passed coming to the checkered.”

Courtney exited Terre Haute as the ISW point leader by just one over Windom, followed by K. Thomas, Bacon and Darland.