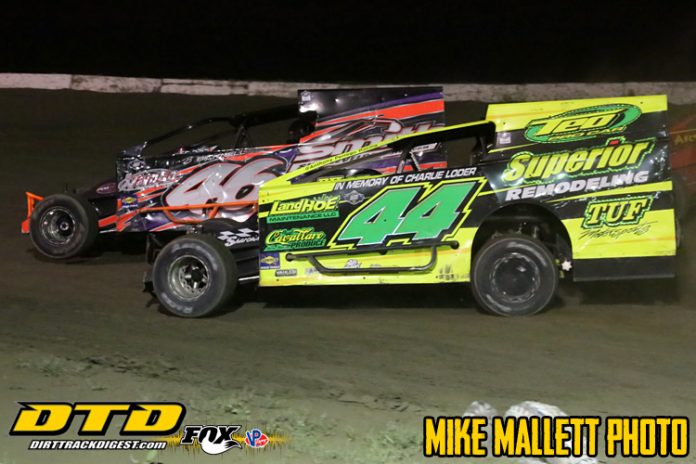 Smith, of Triangle, N.Y., broke into the Bob Hilbert Sportswear Short Track Super Series (STSS) Fueled By Sunoco win column in the ‘Afton Action 50’ at the Afton Fairgrounds track, drawing a roaring ovation upon his arrival in Victory Lane.

The win for Smith came in Round No. 4 of the series’ Halmar International North Region and was worth $5,300 – $5,000 from the posted purse, $200 as the Superior Remodeling Halfway Leader and an additional $100 as the highest-finishing NYSSCA regular in the field.

“I want to thank all the fans for supporting me,” Smith said after climbing to the roof of his No. 46. “That’s why I love racing close to home here in the Southern Tier.”

The event was postponed 24 hours from its scheduled Wednesday date due to a heavy rain system that lingered over the Mid-Atlantic and Northeast for the early portions of the week.


Smith led from start-to-finish in the 50-lap STSS Modified main after picking the pole via a redraw of top qualifiers held in front of the crowd just before the start of the feature.

Smith has been fast in weekly competition with wins at both Afton and his Saturday night home of Thunder Mountain Speedway in Center Lisle, N.Y.

With a talented series field in the pit area Thursday, Smith continued his strength.

“We were struggling on American Racer tires for a while,” Smith said. “We kept working on our program. Now we’ve been able to win the last four times we’ve been on the track.”

Smith faced early challenges from young Damon Decker, then Pennsylvania invader Rick Laubach before eighth-starting Ryan Godown, a past STSS winner at Afton, made his presence known. Godown carved through traffic to arrive in second by the 20th lap.

Smith had to survive three cautions on lap 35. His most formidable advance from Godown came on a lap-42 double-file restart. Godown worked the top of the track and nearly pulled even, but Smith surged back in front.

The final test was a yellow on lap 46, but Smith aced the single-file restart and pulled away by several car-lengths.

The win was Smith’s first in STSS competition. He becomes the series’ 25th different winner in 56 events.

Godown, of Ringoes, N.J., earned a hard-fought second in the Searock Motorsports No. 26. Anthony Perrego of Montgomery, N.Y., got shuffled back in the field early on from his sixth starting position, but rallied in the race’s second half for third in the Brian Smith-owned Superior Remodeling No. 44.

Both Jeremy Smith Racing cars earned top-five finishes as Billy Decker of Unadilla, N.Y., guided the JSR No. 91 to fourth, unofficially taking over the series’ North Region point lead. Track regular J.R. Hurlburt of Otego, N.Y., was impressive, rim-riding from 12th to complete the front five in the Jamie and Denise Page-owned No. 6H ‘Motel Missile’ sponsored by Algonkin Motel.

Finishing sixth through 10th, respectively, were Duane Howard of Oley, Pa., in the Norm’s Save Station No. 357 after starting 19th on the grid; Mike Gular of Boyertown, Pa., who started 20th in Terry Fasnacht’s No. 2A; Jerry Higbie of Newburgh, N.Y., recovering from a late skirmish in the United Pump & Tank No. 48; Hard Charger Danny Johnson of Phelps, N.Y., who finished ninth after starting 24th in the Mike Trautschold No. 28; and Brett Tonkin of Carbondale, Pa., rebounding from a flat left-rear tire.

Dale Welty of Montour Falls, N.Y., put his name in the STSS history books as the winner of the first-ever series Crate 602 Sportsman North Region event. Welty earned $1,050 as he received $50 as the highest-finishing NYSSCA member on hand.

Welty, who recently won an Open Sportsman series race at Accord (N.Y.) Speedway on July 3, led wire-to-wire in a 25-lap race that was slowed by several yellows, a red flag and some intermittent rain drops.

AFTON AFTERTHOUGHTS: It has been a trying season for Afton Motorsports Park with a resurfacing project during the off-season gone wrong. Silty conditions have prevailed for the first half of the season. As a result, the surface was dug and heavily watered for Thursday’s program.

All of the 29 STSS Modifieds and 37 STSS Crate 602 Sportsman on hand were needed to pack the track prior to hot laps….

Three-time STSS North Region champion Andy Bachetti was not in the feature field. Bachetti, of Sheffield, Mass., declined a provisional after a number of tangles and flat tires in his qualifying attempts….

Both Danny Creeden and Matt Sheppard were unable to finish the main; Creeden after colliding with the frontstretch wall and Sheppard after being collected in a turn-two tangle….

In the Crate 602 Sportsman main, Hunter Lapp launched over a multi-car incident in turn two. His car stood up on its nose before landing. Surprisingly, he continued with just a bent right-side rub-rail….

Racing resumes for the Short Track Super Series this Sunday, July 29 at BAPS Motor Speedway in Newberrytown, Pa., when Sunoco Race Fuels and Insinger Performance present the York County Nationals offering $10,000 to win for the Modifieds in Race No. 4 of the STSS Velocita-USA South Region. Central PA Legends Cars complete the two-division program.