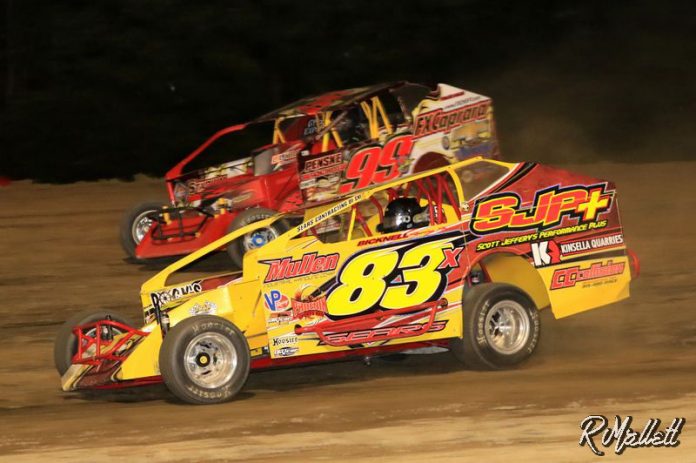 BREWERTON, NY – Tim Sears Jr. claimed victory in the DIRTcar 358-Modified Series race at Brewerton, coming out on top of a race-long brawl with Larry Wight.

Larry Wight took the lead from Tim Sears Jr. on lap two, then darted away from the field in the early stages of the 100-lap DIRTcar 358-Modified Series feature. By lap 12, Wight had stretched his advantage to over three seconds on Gary Lindberg and Sears, weaving in and out of lapped traffic. Said gap was diminished when Ryan Bartlett tagged the turn four wall on lap 15, drawing the first caution of the evening.

Larry Wight got a good restart, but was not able to pull away from Tim Sears Jr. as much as before. The pair reached lapped traffic quickly, battling through thick layers of cars. As the lap counter ticked 50, Sears was still lurking at about six car lengths back over a brutal battle for third between Rocky Warner, Lindberg, Mat Williamson, and Rob Bellinger. However, the torrid battle for third was a half lap behind the top two. Canadian invader Mike Bowman had an engine let go on lap 57, bringing the pack back to Wight and Sears.

Tim Sears Jr. got a great restart, hanging on Wight’s tail the first set of turns, then throwing a successful slide job for the lead in turn three. At the same time, Gary Lindberg stole third back from Rocky Warner, and track regular Ronnie Davis III threw his name into the top five for the first time. Wight hung within a handful of carlengths of Sears, with both of the top two railing the fast cushion. Billy Dunn slowed on lap 76, forcing a caution and allowing Wight to line up door-to-door with Sears.


Once race pace resumed, Sears went back to the point with a slim advantage over Wight. With ten to go, Wight had chopped the gap down to the length of two cars, inching closer every trip around. With four to go, Wight took a stab at the lead in turns three and four, but couldn’t make the pass stick in the middle. The top two slid around a few final lapped cars, and Sears held onto his little lead. Wight tried the bottom a couple more times in the last laps, but it wasn’t quite enough, as Tim Sears Jr. charged to the DIRTcar 358-Modified Series victory. Wight crossed in second, followed by Gary Lindberg, Ronnie Davis III, and Mat Williamson.

“Man, that track was fast, I was almost wide open,” Sears said. “I’m just speechless, this is my biggest win ever and it means so much. After the last few weeks here, this is awesome.”

Larry Wight led much of the race, but ultimately finished P2 to a driver he’s extremely familiar with.

“We just didn’t have enough traction off the corner,” stated Wight. “The top was definitely the dominant line, and I think if we stayed in lapped traffic or just didn’t have all those yellows, we would have been alright.”

Behind the two track regulars was Merrittville campaigner Gary Lindberg, who rode in the second to fourth range the entire event.

“We’ve only been here a few times, but I like it,” Lindberg noted. “The lapped cars were messing me up more than anything, I couldn’t get by them on the bottom. It was tricky, I could hang with them for a bit, but then I was just hoping they would take each other out.”

Mark Yorker led the balance of the first Sportsman main, taking his second of the year over a wild battle between Chris Bonoffski and Rich Townsend. Zack Sobotka and Jeff Taylor went at it for the win in the second main, with Sobotka making the pass for the win coming out of turn four on the last lap and denying Taylor his first Sportsman win by .03 seconds.

To nobodies surprise, Justin Williams grabbed another Mod Lite win in dominating fashion. The checkered keeps Williams’ loss count at two on the year at Brewerton, because at this point the losses are easier to count than the wins. Quinn Wallis scored a narrow 4-cylinder victory, passing Chuck Powelcyzk and holding off Evan Wright in the final laps of the event.