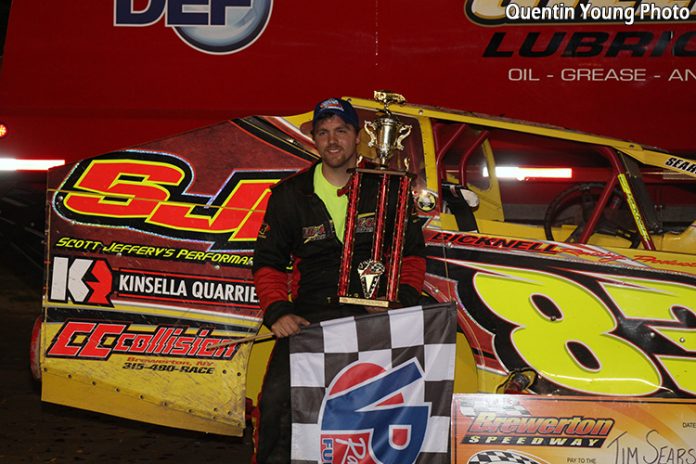 Larry Wight made one costly mistake in Friday night’s MDA 100 at the Brewerton Speedway and Tim Sears Jr., pounced. Sears got up in front of Wight to take the lead then held on at the end for the $4,000 win in the DIRTcar 358-Modified series event. It was his first Modified series win after numerous Sportsman victories in the past.

“I haven’t won a series race since I ran Sportsman,” said Sears afterwards. “We won quite a few Sportsman ones. I’d like to win quite a few more of these ones. These are a lot harder to come by. The class of cars and the competition in the Modified class is pretty fierce.”

Sears started on the pole with Wight getting the best of him on the second lap. Wight rocketed around the outside of the speedway to take the lead. He stayed at the front with Sears losing second briefly in traffic in the opening 20 laps. He regrouped and got back into the runner-up position.

Sears made his move on a lap 65 restart. The caution had come out for Mike Bowman as he stopped with an expired engine in turn four. Wight went to the top for the restart while Sears was able to pull up alongside of him exiting turn two. He completed the pass with a slide job in turns three and four. “I knew if I could stay close to him down the frontstretch if he slid in front of me going into one and two I could diamond if off a little bit I could get a run down the backstretch and beat him,” he stated about his pass of Wight for the lead. “He was good in the middle of three and four and getting to the top. As long as I could keep my car straight I had the tires and the drive. We just kept it straight.”

Although Sears got the lead, Wight wasn’t going to go away. He stayed glued to the rear bumper of Sears as they raced in traffic up until the conclusion of the race. Sears was just going all out so he could keep Wight at bay.

“We were racing hard the whole race,” cited Sears. “With the small-blocks there is no saving anything. You got to go right off the bat. You just try keep your tires under you for the end and fortunately we were able to.”

Over the final few laps, traffic got a bit thicker for Sears forcing him out of his comfort zone on the extreme outside of the speedway. He remained on the heavy cushion in turns one and two but migrated his way to the middle and bottom grooves in turns three and four. That lane change helped him work through traffic quicker than Wight.

“When we were catching lapped cars some of them were running the top,” commented Sears. “It was hard to get a good run on some them because they would beat me down the backstretch. I couldn’t slide in front of them in three and four so I had to find a different way around. Fortunately we could roll the bottom pretty good as long as we kept it straight.”

Larry Wight had one hiccup in Friday night’s feature and that was all Sears needed to get by him for the win. Wight went in low and took too long sliding his way to the top. That allowed Sears to pull up next to him. He then completed the pass in turns three and four.

“I took too long to slide up across the track,” said Wight. “I think I entered to low going into one. He was able to get the advantage on us. After that he was a little bit better off the corner, but I think we were better in and through the corner. I think if we had a few more lap cars we probably could have made a move on him up through middle of three and four. Either way it is what it is. The car is one piece and we’ll take it.”

As mentioned, Wight was able to stay with Sears and he was always within striking distance. Near the end it seemed as if Wight was getting just a little better than him, but Sears just didn’t make any mistakes.

“I found the middle of three and four,” he stated. “There was a lot of brown still there. He was running just above it. I could get right to his quarter panel but I couldn’t really come off with him. Then in one and two, that was kind of a crap shoot depending on the holes. If you hooked it or if you were able to get through it. It seemed to be every lap he’d hit the hole I’d hit the hole and I couldn’t make up any time on him.”

Gary Lindberg ended up finishing in the third spot. The Canadian invader started on the outside of the front row. He was shuffled back to third at the start. At one point he dropped back to fourth but he regrouped to get back into the final podium spot.

“We’ve never had a top five here,” commented Lindberg. “We’ve broke and didn’t make the show, but we run decent here. We usually time trial well. It was good to get a top five finish. The outside was good tonight, you had to get up on it. I didn’t realize that early. The 99 (Wight) slid me right off the start there and I fell back to third. That is pretty much where I stayed. I lost third in lapped traffic, went to go under a guy and Rocky Warner went around me. I got him on the restart and stuck on the outside and hoped for the best.”

Williamson Finishes Where He Started

Mat Williamson invaded Brewerton Speedway on Friday night. The St. Catherines, Ont., driver started the night redrawing fifth. When it was all over, that is exactly where he finished. He ran further back than that for portions of the race before getting things rolling late.

“We started fifth, we didn’t lose anything, but we didn’t gain anything,” mentioned Williamson. “It could have been a better night, but I’ll take it.”

Over the final 10 laps Williamson had a great battle with Rocky Warner and Jimmy Phelps. At one point the three came to the start finish line three-wide. Heavy contact was made between the three. All of them continued to battle hard.

“Rocky slid me then he got up over the cushion,” commented Williamson. “I crossed him up and went back the middle and Jimmy was there a little bit. It was hard racing. That stuff is going to happen. Like they say in Days of Thunder, ‘rubbing is racing.’”

Phelps Charges From Back to Front

Jimmy Phelps had to pass a lot of race cars on Friday night. The Baldwinsville, N.Y., driver completely missed the setup in time trials forcing him to start at the back of his heat race before then running that consolation. That misstep forced him to come from behind all night long. He did just that in the feature as the former Brewerton champion raced from 23rd starting spot up to sixth.

“It’s inexperience with this kind of stuff,” cited Phelps. “We have a car we haven’t run much. We have a motor that we haven’t ran much and we come to track we haven’t been on in terms of size to get a gear. We missed it early and played catch up. I felt good in the consi and that got us headed in the right direction. I think in the feature it was a rolling roadblock. We set up for the end and it didn’t come quick enough for us. The track needed to slow down earlier. We made up a lot of ground at the tail end of that race, but it was tough. We never got going until late. I think we had more but we needed a lot more laps.”

For most of the race Rocky Warner was mixing it up at the front of the field running as high as third in the 100-lap affair. Unfortunately a bad restart cost him several spots before falling back a few more in the final few. Warner eventually ended the night in ninth.

“On that last restart the 28 (Lindberg) did a slide job, which is racing and I’m not complaining about it, but it bit us in the ass,” said Warner. “When you are so bunched up after a restart, you are all so close. He did the slide job. I slowed down and two guys went underneath. You just get racing. Williamson did the same thing. We did a couple slide jobs on each other. The same thing, I just got the short end of the stick tonight. Nothing you can do about it. That’s racing. I’ve been on the other end of it numerous times. We just on the bad end of it tonight. I would have liked to stay in the top five obviously. We don’t get to come up here often. We wanted to have a good run but realistically I’ll take what we got.”

Bowman, the Canadian version, lost a motor in the feature event running just outside the top five. Afterwards he mentioned that he felt like he had a top five car up until the engine expired…

Billy Dunn pulled off during the feature event after packing the wheel full of mud. He felt a vibration which caused him to exit the race track…

Ryan Jordan’s big to make the feature ended when he caught a yuke tire in turns three and four causing the front end to collapse on his No. R21.