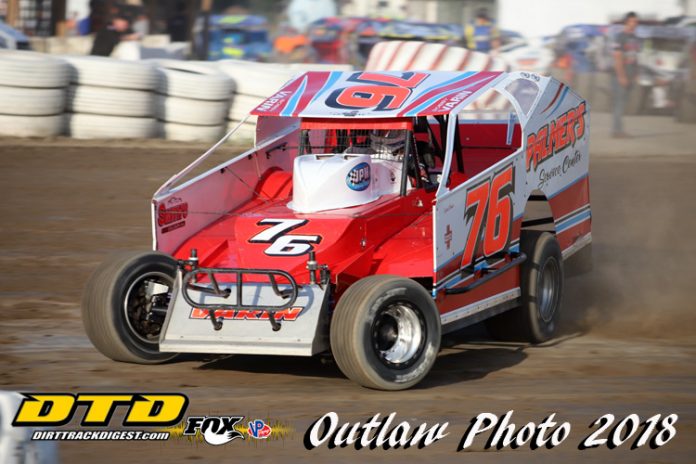 FONDA, NY – On Saturday evening at the “Track of Champions” Fonda Speedway, Bobby Varin increased his win total to 63 on the all-time win list of the historic Fairgrounds track. The win came in the Palmer’s Service Center #76 owned by Alton and Carole Palmer and it was Varin’s third of the 2018 season to date.

“Just before the feature event, Alton made some radical calls and changes to the car,” Varin said in victory lane. “I thought that we may be going in the wrong direction but it was a good night to try something different setup wise for the race coming up here this Wednesday (the Jack) and it ended up working out for us.”


Shaun Pangman used his pole starting position to his advantage and took the initial lead in the 30-lap modified feature event with Scott Huber in tow. Rocky Warner started the event in the fourth position and took the second spot away from Huber on lap two with seventh place starter Josh Hohenforst also getting by Huber for the third spot.

Bobby Varin started the event in the eighth position and was moving quickly to the front, going in between the cars of Darwin Greene and Jeremy Wilder for the fifth position on the backstretch on lap five. By the time lap 10 was on the lap counter, Warner and Hohenforst had reeled in the race leader Pangman, and when the lap cars of Chuck Allen and Aaron Jacobs were racing side by side for position Warner saw his opportunity to get to the lead.

On lap 12, Warner went around the outside of Allen, Jacobs, and Pangman to take the lead coming out of turn two while at the same time Varin made a great move around both Hohenforst and Pangman for the second position. At the halfway point in the event the top five consisted of Warner, Varin, Pangman, Hohenforst, and Huber.

Hohenforst got by Pangman for the third position on lap 18 at the same time the leader started to catch the back of the field and put some cars a lap down. Varin was running into turn one on the high side, then he would diamond the corner to come out of turn two on the low side and was getting such a run going down the backstretch that he was right on Warner’s rear bumper with seven laps remaining in the event.

Pangman’s great run came to an end on lap 24 when he spun out on the backstretch while running fourth bringing out the caution. Using the move described earlier, Varin took the race lead coming out of turn two on the backstretch with five laps to go with the another yellow flag coming out at that point for Hohenforst who ended up spinning his car in turn two.

When Warner threw it in to turn two for all he had just after Varin had gotten by for the lead, he got out of shape and when he corrected and gathered up his car he just clipped Hohenforst forcing Hohenforst to spin. Both cars continued on in the event. On the restart the yellow was out one more time for Pangman and Anthony Cardamone who got together in turn two.

“My crew works diligently on this car all week long,” Varin said in victory lane. “I wouldn’t be here without those guys as that’s what it takes to win here at Fonda.”

Griffen Mansmith and Josh DeMagistris started the 25-lap sportsman feature on the front row with DeMagistris the early race leader. The one and only caution in the event came out on lap one when the second place car of Charlie Tibbitts slowed to almost a complete stop coming out of turn four with Jeff Holt, Don and Kathy Bellen all getting together on the front stretch. All of those cars were done for the night at that point.

DeMagistris held the lead on the restart with sixth place starter Mark Mortensen now in the second position. On lap three, DeMagistris and Mortensen were side by side for the lead and after staying that way for an entire lap Mortensen finally cleared DeMagistris for the lead going into turn one. From that point on Mortensen just kept pulling further and further away from the rest of the pack leaving it a race for second place to the checkered flag.

Tenth place starter Tony Farone moved past Brian Borst for the fourth position on lap six and then one lap later Farone was the new third place car after getting by Ricky Quick for the spot. Just before the halfway point in the event Mortensen held a straightaway advantage over DeMagistris who was comfortably in the second position with Farone still third.

Lap traffic came into play with 10 laps to go but Mortensen was able to get by the lap cars safely and maintain his lead to the checkered flag, winning the event by almost seven seconds over second place finisher DeMagistris. Farone, Borst, and seventh place starter Cody Clark completed the top five.

For Mortensen it was his second win of the season in the Jumpin Jack’s Drive-In, Socha Plaza, Benjamin Moore Paints sponsored car #1M and the 20th of his career in the division, which is second on the all-time win list at the track, with the win coming in a brand new DKM “Cyclone” chassis.

“The car was good tonight,” Mortensen told Dan Haslun in victory lane. “I have to thank the DKM crew who did a lot of work on this car this week. I had a good starting spot tonight and this was a lot of fun.”

Seven caution flags slowed the 20-lap distance in the pro stock feature but when there was green flag racing it was exciting with Ron Delease the first to lead the event. Defending track champion Kenny Gates was the new second place car on lap two with seventh place starter Josh Coonradt right behind in third. On a lap three restart, Gates was the new race leader with Coonradt now second and eighth place starter Chuck Dumblewski third.

At the halfway point Gates, Dumblewski, Coonradt, sixth place starter Ivan Joslin, and Justin Knight were in the top five and with the second through fifth place cars battling in a four way race for the second spot it allowed Gates to pull away to his fifth win of the 2018 season and his all-time leading 77th win of his career over Dumblewski, Luke Horning who restarted at the rear of the field after one of the early race cautions, Coonradt, and Joslin.

“It was a fantastic night with Todd (Hoffman) and Terri (Mohrman) getting inducted into the Fonda Speedway hall of fame,” Gates said in victory lane. “The track was challenging tonight, the competition was great, and I couldn’t be happier.”

Rob Lanfear took the lead on a lap 11 restart and went on to the win in the 15-lap limited sportsman feature event but was disqualified in post-race tech for an illegal rev box handing the win over to defending track champion Cory White. Derrick McGrew Jr., Bill Port, Dylan Eldred, Jerad LeClair, Michael McCallion, and Lanfear completed the finishing order in the event.

Jason Samrov took the lead on a lap three restart in the 12-lap street stock feature and went on to his fifth win of the season and the eighth of his career in the division over Michael Arnold, Johnny Young, Cliff Haslun, Rob VanAernam, John Bradt, Jody Watkins, and Kenny Hollenback.

This Wednesday, August 1 a must see event will take place at Fonda with the running of “The Jack” which is a tribute race for Fonda Speedway legend Jack Johnson. The race will be a part of the Super DIRTcar Series with the winner of the event getting a guaranteed starting spot of 12th at Super Dirt Week this coming October in Oswego. The “Hondo Classic” for pro stocks and a street stock challenge will also be a part of a racing program which gets underway at 7:00 p.m.