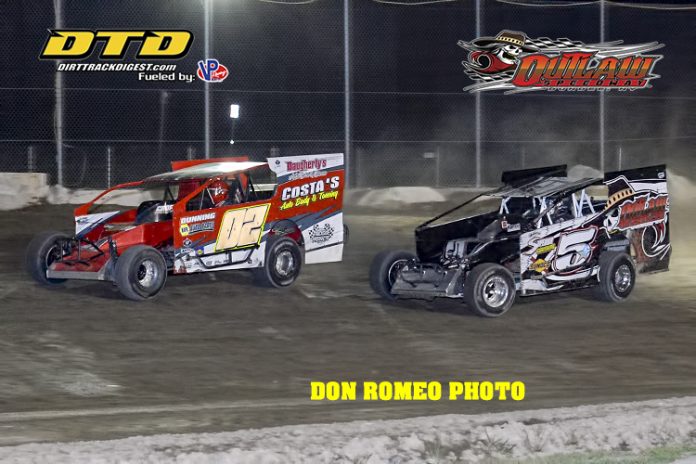 DUNDEE, NY – On the heels of an action-packed first night of the A-Verdi Storage Containers Summer Nationals at Outlaw Speedway, racers and fans recovened at the 4/10 mile oval for night two, featuring a $6,000 to win main event for 360 Sprint cars and a $4,000 to win paycheck awaiting the winner of the Friendly Dodge Chrysler Jeep Ram Outlaw Modified event. 152 cars filled the pit area for the night’s action.

The Friendly Chrysler Dodge Jeep Ram Outlaw Modified feature started with Cory Costa taking the lead from Kyle Coffey and pulling away till Ron Cartwright stopped in turn two to bring out a yellow on lap 16. Costa streaked away on the restart as Jim LaRock and Brady Fultz ran side by side for second. Costa would run unchallenged the rest of the way to take the win, with LaRock eventually pulling away from Fultz for second. Kyle Coffey and Steve Paine rounded out the top five.

Matt Tanner and Chuck Hebing started on the front row of the 30-lap 360 Sprint ‘A’ Main by virtue of their wins in Friday night’s twin ‘A’ features. Hebing took the lead and carved through traffic as Danny Varin got past Jordan Thomas and Matt

Tanner and began chasing him down. Varin and Hebing battled for the lead over the final four laps, with Varin taking the lead for good on lap 28 and scoring the win over Hebing, Thomas, Coleman Gulick, and and Jeff Cook in a caution-free contest.


360 Sprint heats were won by Joe Trenca, Danny Varin, Kelly Hebing, and Jortdan Thomas. The ‘B’ Main was won by Chad Miller and the Dash was captured by Jordan Thomas.

In the Outlaw Crate Sportsman Series feature, Dave Marcuccilli came from his third starting spot to take the lead from Dustin Jordan on lap 8. Tom Collins Jr, Friday night’s winner, was able to move into second after a lap 14 restart, and mounted a challenge in traffic in the closing laps, but Marcuccilli maintained his undefeated streak alive in the series with his 4th win. Following Collins Jr across the line were Dustin Jordan, Brian Fish, and Jimmy Zacharias.

In the Marion Decker Agency IMCA Modified Empire Series main event, Will Ward led untill lap 10, when Brad Smith made his way by for the top spot. Smith led the rest of the way to take the win over Will Ward, Rich Michael Jr, Rodney Morgan, and Keith Jack Lamphere.

The Street Stock feature offered up a $1,000 winner’s payday, and Ted Morseman was your leader till lap 9 when he got a right rear flat, handing the lead to Adam Depuy. Glenn Whritenour, looking for a weekend sweep, came up to battle Depuy over the final laps, but Depuy withstood the challenge to take the win over Whritenour. Carl Cleveland just edged Jared Hill and Quinn Sutherland in a three wide run to the line for third.

The 4 Cylinder division went ‘Outlaw Style’ for their event, which saw Ray Hyer and Brad Shepard duel for the lead through the first half of the 20-lap distance as Chris Woodard and Justin LeDuce drove up to third and fourth. A lap 14 restart allowed Woodard to get by Shepard and with two to go, Woodard passed Hyer and went on to take the win. LeDuce, Austin, and Shepard were the rest of the top five.

In the competitive Marion Decker Agency Hobby Stock class, a trio of drivers battled for the win as Eric Williams, Friday night’s winner Jason Thomas, and Justin Eldridge duked it out. Marc Minutolo joined the fight in the final couple of laps, and as they came around the last corner, Williams’ car faded and Eldrige outdragged Thomas to the line for the victory. Minutolo also got by Williams, who coasted across the line in fourth, followed by Jason Clugstone.

Outlaw Speedway is back in action on Friday night, August 3rd, with the annual NASCAR Night, featuring an appearance by Ryan Blaney, who will be signing autographs. The Patriot Sprint Tour will join the regular Super 7 Show for on-track