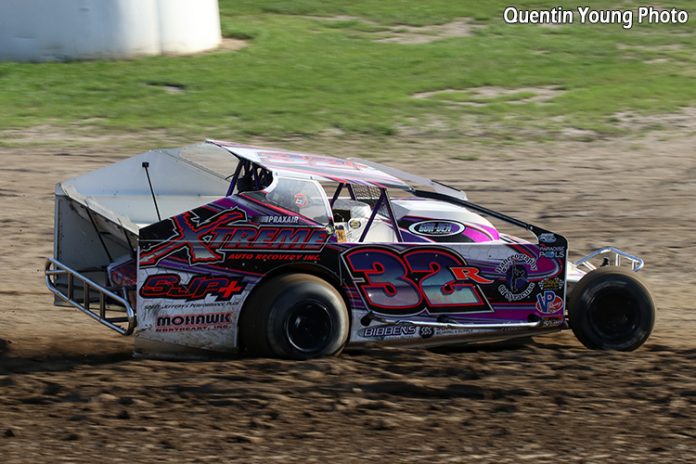 FULTON, NY – During the 2018 season Memphis, NY’s Ron Davis III has looked nothing like a Modified rookie grabbing top finishes and an early season feature win to put him 3rd in the Fulton Speedway point standings.

Saturday night was race number two of the 50-lap, $2,000-to-win Unique eCigs 358 Modified Series. Ron Davis III battled up front all race long that also had heavy traffic that he would use to his advantage. Running third on lap 30 behind Billy Whittaker and Tom Sears Jr., Davis saw an opening driving by them both and into the lead on lap 31. Once out front he would hold off strong challenges from first Larry Wight and then Tom Sears Jr. for his second Modified victory in his rookie season.

After the redraw for starting positions Billy Whittaker and Ron Davis III would lead the field down to the green for the start of the Unique eCigs $2,000-to-win 50-lap feature with Whittaker grabbing the early advantage.

At lap 10 Whittaker and Tom Sears Jr. were in a two-car breakaway at the front of the field racing for the lead as they were already putting cars a lap down. Not far behind the top-two Davis, Jordan McCreadie and Larry Wight were locked in a tight battle of their own in the top five.


With 15 laps showing on the scoring tower Whittaker was able to get a few car lengths between himself and Sears as Davis, McCreadie and Wight started closing in on the top two.

Whittaker would open up a half a straightaway lead by lap 20 over Sears, Davis, McCreadie and Wight as the top five all ran the topside against the cushion.

When the race reached the halfway point, Whittaker would see his lead shrink because of lapped cars racing two-wide allowing Sears, Davis, McCreadie and Wight to close in.

On lap 30 Whittaker, Sears and Davis ran under a blanket right in the middle of lapped cars. One lap later Davis would take advantage of the traffic driving by both Whittaker and Sears to be scored the new leader.

The yellow flag would wave on lap 36 when Whittaker suddenly slowed on the back straight with mechanical issues while running second.

When the race went back green Davis would hold off heavy pressure from Larry Wight and then challenges from Tom Sears Jr. to drive away for his second career Modified win at the speedway. Tom Sears, Larry Wight, Jordan McCreadie and Pat Ward finished second through fifth.

In the first feature Ryan Hatherill would out-run Joe Sobotka to lead the opening lap by a few car lengths while the racing behind him was two and three wide in the early going.

With 10 laps showing on the scoring tower and no yellows to slow the field down, Hatherill led by a full straightaway as Sobotka, Amy Holland, Kyle DeMetro and Scott Prentice battled for second through fifth. Cautions on lap 11 and lap 12 erased the advantage Hatherill built up.

After moving into second Prentice caught Hatherill and passed him for the lead on lap 21. One lap later Hatherill would fight back retaking the lead. The winning pass came on lap 23 when Hatherill bobbled in turn four allowing Scott Prentice to drive by for his first win after a decade away from racing. Ryan Hatherill, Jackson Gill, Anthony Rasmussen, Wade Chrisman finished second through fifth.

In the second 25-lap Sportsman feature Tyler Murray would lead the opening 3 laps until he hopped the cushion on a restart allowing Greg Doust, Tony Finch II and Willy Decker drive by and occupy the top three spots.

With 5 laps showing on the scoring tower Doust opened a five car length advantage while behind him you could have thrown a blanket over Decker, Zach Sobotka, Finch and Murray as they raced within inches of each other for second through fifth.

Doust maintained around a five-car length lead with 10 laps to go as Decker, Alan Fink, Sobotka and Finch chased the leader.

Over the final laps and no yellows to bunch up the field Greg Doust was never seriously challenged the rest of the way grabbing his first win since the mid-2000s. Alan Fink, Willy Decker Jr., Chris Mackey and Zach Sobotka finished second through fifth.

In the 20 lap Billy Whittaker Cars & Trux RUSH Late Model feature Sean Beardsley would jump out to the early lead until lap 5 when Chris Fleming drove under Beardsley and into the top spot.

At the halfway point Fleming and Beardsley battled for the lead with Bret Belden, Jason Parkhurst and Kevan Cook having a race of their own for third, fourth and fifth.

Over the second half of the race and no yellows to slow the pace, Chris Fleming erased a season of bad luck as he was first under the checkers for his first win on the “Highbanks” in 2018. Sean Beardsley, Bret Belden, Jason Parkhurst (after rolling his car in his heat race) and Kevan Cook finished second through fifth.

Matt Becker took the lead at the drop of the green in the 15-lap E&V Energy Novice Sportsman feature leading the opening 4 laps before Kearra Backus, using the topside of the speedway, drove into the top spot. Backus lead was short lived as one lap later she jumped the cushion allowing Becker and Pat Nolan by.

Once out-front Matt Becker would lead the rest of the way for his second win of the year. Kearra Backus, Jake Davis, Pat Nolan and Ryan Gustin finished second through fifth.

Have you always wanted to get on the “Highbanks” and go fast? Truck owners, Saturday, August 4th is your chance in the One-on-One Spectator Truck Races. All you need is an insured and street legal truck, valid driver’s license and a helmet. After buying your general admission ticket just go to the track office to sign up.