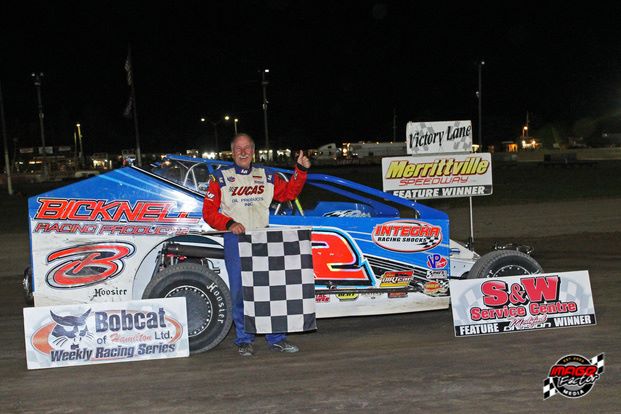 THOROLD, ONT – Schneider Electric invents technologies that transforms the places we live, work and play, empowering people to do more with less.

Moulton’s win came in the finale of the Hardys Racing Triple Crown Mini-Series which saw Alex Riley of Thorold become the first champion of 2018.

Dykstra, who won his first career Strickland’s GMC Crate Sprint feature July 13th at Ohsweken Speedway was first to lead the Action Sprint Tour Feature and by lap 3 had opened up almost a full straightaway lead on Ryan Hunsinger and the field.

“I needed some lap traffic at the end,” said Hunsinger post-race, “I was throwing everything I had at Jacob … it was a fun race.”

Hunsinger quickly tried the high groove – the same one where he met with disaster back on May 21st until a caution on lap 5 erased Dykstra’s huge advantage.

“The track was good high and low,” said eventual third place finisher Aaron Turkey wh took over second on the restart, “hope everyone enjoyed it … especially us going three wide for the win.”

By the time Dykstra had opened up a 5 car advantage by lap 7, Turkey and Hunsinger began to close in to halfway. Hunsinger and Turkey were side by side and by lap 12 – Turkey joined the battle going three wide. Just as Turkey became the new leader caution put Dykstra back in top spot for the restart.

Turkey challenged the leader on the restart but once Dykstra resumed control – the lead was some 10 car lengths. In the closing laps, Hunsinger regained second spot but couldn’t catch the leader by the checkered flag.

“We’ve got the best of the best here Saturday Nights,” said Pete Bicknell after winning his first S&W Service Centre 358 Modified Feature of the season, “I’ve been trying a lot of experimental stuff this year but the last few weeks have went back to the basics. My crew has been working so hard … so it’s good to get one for them.”

Scott Wood was first to lead the 35 lap Event and in the first laps was on cruise control. By lap 10, Bicknell had closed in on the leader but Wood was able to maintain a car length advantage.

At the halfway point it was still Wood out front although by lap 20 – Bicknell had closed the gap. Crossing the start finish line to start lap 22, Bicknell became the new leader and soon was able to pull away from the field

In the last half of the race the battle to watch was the one for third between the threes … the 3B of Chad Brachmann and the 3RS of Ryan Susice. Susice would get by Brachmann on lap 32 but couldn’t catch Bicknell in the closing laps who was about a straightaway ahead.

Bicknell and Susice were followed by Wood who battled back to retake third with Brachmann and Tim Jones closing out the top 5.

“I started racing 37 years ago,” said second generation racer Jay Mallory after winning his first David Chevrolet Sportsman feature, “early on I said that if I can win at least one race a year … there will be another year.”

Mallory was greeted in Victory Lane for the first time by incoming Starter – his brother Randy who will take over from current starter Steve DeVos who is set to retire in the coming weeks.

Vince Fargnoli set the pace at the start of the 25 lap event but the new leader with one lap complete was Jordan Cosco with Jay Mallory and Paul Gaboury following into second and third. James Friesen would join the battle of the frontrunners before caution slowed the pace on lap 9.

With Cosco out front on the restart, Mallory would challenge but was stuck in second. Eventually Cosco would drive away from Mallory until another caution on lap 19 erased a 1.7 second lead he’d built in his 17c.

Cosco resumed the lead on the restart with Mallory making several attempts at the lead but to no avail. The final time out of Turn 4 was his last chance and under his brother’s checkered flag was less than a car length ahead.

Mallory and Cosco were followed by Chad Chevalier, James Friesen and Justin Sharp.

“What a race,” said Jay Moulton after winning the Hardys Racing Triple Crown Mini-Series Finale in perhaps the closest finish in 4 Cylinder History at the Thorold track, “I tried so many laps       … I worked on him for 20 laps and saw he was quicker around the top … so that’s where I went the last time out of Turn 4.”

Moulton would edge eventual Triple Crown Champion Alex Riley by a mere 4 thousandths of a second.

“Wow that was so close,” said Riley, “congratulations to Jay on the win … thanks to Cole for supporting the Triple Crown and to my car owners Lisa and Kyle.”

Riley went into the event which doubled as an Insta-Panels Duel on the Dirt Series just one point ahead of Cole Hardy who added, “I can’t wait to do it again next year.”

Austyn Werstroh was first to lead the 30 lap Special Event until Alex Riley took over until caution slowed the field on lap for Chris Laskey. While still under caution Werstroh would also head to the pit area. Riley was back out front on the restart and was joined by Moulton and Kyle Rothwell who broke away from the field.  Moulton would challenge Riley several times to halfway but the race to watch was between the father and son of Tony and Anthony Kelly and Cole Hardy.

Hardy would get by the two and Moulton would try Riley again until caution on lap 20. Riley would set the pace on the restart with Hardy challenging Rothwell … the frontrunners three wide for position by lap 24.

Rothwell would take over second but Moulton would fight back. A couple car lengths behind, Moulton would make one last try for the lead stick out of Turn 4 the final time.

Moulton and Riley were followed by Hardy with Rothwell and Tony Kelly as the top 5.

At the start of the 20 lap Hoosier Stock Feature it was the Podwinskis – father Bill and son Tanner taking the field to the green flag with top spot not decided until Tanner found the advantage into Turns 3 and 4 the first time.

Kyle Pelrine would take over top spot the first time down the frontstretch and by lap 5 had opened up a 5 car lead on then runner up Dave Bailey.

Unfortunately the night would end early for Tanner Podwinski after making contact with the front stretch wall with Pelrine out front on the restart with action almost 4 wide.

Rob Murray would challenge Pelrine ahead of a lap 9 caution with Pelrine and Murray back at it once green again. Dave Bailey would come out on top of a three wide battle for top spot until Pelrine regained the lead on lap 13.

Just before a lap 14 caution, the top 3 was Pelrine, Murray and Brad Sheehan with Murray the new leader on the restart.

At the finish, Murray was followed by Sheehan, Pelrine, Bailey and Dave Small.

Jordan Fidler was first to lead the 12 lap Feature for the Dave’s Auto & Speed  Centre Division until Adam Plazek took control on lap 2.

5 Laps in, Drivers began to fall victim to flat tires – the first of which was Chris Mussat on lap 4. Still under green, Plazek continued to lead the way until caution on lap 6 when both Kyle Miller and Fidler slowed.

Plazek resumed control on the restart and led the last half of the event for his 7th win of 2018. Plazek was followed by John Couture, Kevin Conley, Mussat and Tina Ronning.

The month of August will open with an annual doubleheader with TWO MUST SEE EVENTS.

The Bobcat of Hamilton Weekly Racing Series Event will also feature the 50 lap Jerry Winger Memorial for the 358 Modifieds in addition to Sportsman, Hoosier Stocks, Mod Lites and the Thunder on the Dirt Vintage Race Car Series hosted by Merrittville Speedway’s Reunion Committee.

Grandstands will open at 530

Grandstands open at 4 with Show Time at 7 PM.

Celebrating more than 15 years of serving the Hamilton, Halton and Niagara Regions, Bobcat of Hamilton is a leading provider of compact equipment for a wide variety of markets – striving to empower customers to do their jobs more efficiently and effectively.